The Fightin' Dan Campbells chewed kneecaps en route to a 3-14 record a year ago, but the bright end to 2021 has many optimistic about the '22 Detroit Lions. Our betting preview outlines their path to success — and what defines success for the Lions.

For a team that won only three games last season, the Detroit Lions were one of the best stories of 2021 — doubly so if you rode the Lions to an 11-6 ATS finish.

Detroit had the luxury of playing with house money, as expectations were very low for Dan Campbell’s rah-rah style of coaching and a franchise in the post-Stafford era. That also meant plenty of forgiveness from the oddsmakers week to week. Detroit was a dog of +7 or higher in 11 of its 17 games.

Now, the Lions’ NFL odds are calling for a stark improvement with a win total of 6.5. Detroit may have caught some foes with their guard down in 2021 but no one is taking the Lions lightly this year, including the betting public.

Reward or regression? That’s the question we seek to answer in our 2022 Detroit Lions betting preview.

A lean to the Under 6.5 wins is not a shot at the Lions by any means. In fact, six wins are absolutely in their grasp, considering the state of the NFC North and the quality of quarterbacks on the upcoming slate. Goff is on par or at least competitive with his QB counterparts in eight games.

However, four of those comparable QB matchups come on the road, and winning away from home is a cultural deficiency in Detroit. Last year, the Lions were 0-8-1 SU away from home, and even with Matt Stafford under center, this franchise had a hard time in enemy territory (34-70-2 SU on the road since 2009).

The Lions have a home-friendly frontloaded schedule but close the campaign with three of their final four on the highway. Win No. 7 may come down to a Week 18 finale at Green Bay (+7.5) and whatever the Packers are planning before the playoffs.

What will win bets: The trenches

In true Dan Campbell “kneecap biting” proximity, the Lions will win the close-up war on the line of scrimmage most games. Detroit has sturdy pillars on the offensive line finally healthy all at once (or at least for the start of training camp), giving the Lions’ rushing attack a huge push up front and providing sound pass protection. Too bad it’s wasted on Jared Goff.

On the other side of the ball, Detroit drafted elite prospects on the defensive line with No. 2 overall pick Aidan Hutchinson and second-rounder Josh Paschal. The hope is giving the pass rush some fangs after Detroit posted a pressure rate of just 20.5% (29th) but at the very least, teams will have a hell of a time running against the Lions.

If the defensive line can’t make opposing passers uncomfortable, the Lions are in for a long season. Again. Detroit finished 31st in yards allowed per completion, dead last in opponents’ average depth of target, and 27th in pass defense DVOA at Football Outsiders.

Defensive coordinator Aaron Glenn will likely be more aggressive with his blitzes in order to protect the guys behind the line. But, should rival offenses keep the pass rush at bay or break through the D-line, they’ll shred a shallow pool of LBs and expose a coverage-challenged group of CBs. That will lead to quick scores and force the Lions to abandon the run, disarming their greatest offensive strength.

According to the lookahead lines, Detroit is projected to at least equal last year’s win total of three as it’s slim chalk in Week 4, Week 13, and Week 17.

The Lions were underdogs in every game in 2021 and made the most hay at home, posting a 6-2 ATS count inside Ford Field, where they faced an average spread of +6.25 and finished with an average margin of -5.8 points.

This season, Detroit sees an average home spread of about +2.5 but faces a much lighter schedule than 2021 (T6), ranked out 28th in SOS and 25th in my QB SOS. Outside of dates with Green Bay and Buffalo, the Lions have a legit shot in seven of their nine home stands. Motown moneylines, anyone?

Road games have long been the thorn in the Lions’ paw but the schedule makers have taken pity on Detroit in 2022, as the team stays in the Eastern and Central time zones for all eight away games and ventures no further West than Dallas in Week 7.

Fun Fact: Outside of a 12:30 p.m. ET kickoff at home on Thanksgiving and a TBD time slot for Week 18, the Lions play every other game at 1 p.m. ET. Big ups to those believing in body clocks.

Detroit is everyone’s favorite sleeper this year, but I’m not seeing it. This is still a Bottom-5 defensive roster, and Jared Goff has proven to be a bottom tier starting quarterback.

It’s hard to find a more forgiving early-season slate than Detroit’s start to 2022, with three of the first four games coming at home (as well as five of the first eight at Ford Field).

The sked gets underway vs. the Eagles, another team looking to take the next step. Philadelphia has been an offseason darling in the betting markets, and some books have gone from Lions +3.5 to as high as +4.5 for Week 1. As for the total (46.5), Detroit has one hell of an Over run in season openers, going a perfect 10-0 O/U in Week 1 since 2011 while allowing 31.5 points per game in those contests.

Week 2 keeps the Lions in the Motor City for a war with Washington. You can find Detroit between +1 and +1.5 but the Commanders’ fate vs. Jacksonville in Week 1 will have heavy influence over this line. Books are expecting a tight game, so can Campbell get his squad over the hump in those pressure spots? Detroit finished 2-6-1 SU in one-score games in 2021 (9-0 ATS) and went 0-3 SU in games with spreads of a field goal or less.

The Lions have a rough run to end the schedule, playing three of their final four games on the road. That concludes with a Week 18 finale at Lambeau Field, but Detroit could bite the Cheeseheads in the ass with an advantageous situational spot in Week 9.

The Packers go to London to face the Giants in Week 5, come back to Wisconsin to play the Jets in Week 6, then face three straight road games: at Washington, Buffalo, and Detroit.

Not only is Green Bay road weary and handing close to a touchdown to the host Lions in Week 9, but it also sits in a spicy sandwich spot: a letdown off a Sunday night shootout with the Bills and a lookahead to a key NFC home game vs. Dallas in Week 10.

The Lions were an Under wonder as the offense struggled under OC Anthony Lynn through the better half of the 2021 slate, owning a 3-8 Over/Under record in the first 11 games. Campbell took over the play-calling with input from new OC Ben Johnson and Detroit’s passing game sprung to life, finishing 4-2 O/U in the final six outings.

Early reviews on Johnson’s new offensive scheme are glowing coming out of OTAs, with an emphasis on pace and increased no-huddle. The Lions ranked out 13th in offensive tempo and 19th in plays per game (62.1) last season, so giving it a little extra gas grabs the attention of Over backers.

Detroit has one of the better run-blocking units and a deep roster of running backs, complementing a sound WR corps that will look much better if/when rookie Jameson Williams takes the field (recovering from torn ACL). That leaves Goff as the biggest X-factor. The coaching staff is gushing about his offseason work, but bettors are all too familiar with the two faces of the former No. 1 overall pick.

Bookies aren’t necessarily buying into the “good” side of Goff, as Detroit’s totals are pretty tempered. That said, the Lions scored fewer than 20 points in a dozen games in 2021 and increased pace, chemistry, and talent will get Goff & Co. over the 21-point hump most weeks.

D'Andre Swift finished with 617 yards on the ground in 13 games last season, including back-to-back 130-yard efforts in November. He has one of the most promising run block units plowing the road but his durability and role in this new offense could trim his rushing production.

That’s not discounting Swift’s abilities. With a quicker pace, emphasis on the air attack, and also considering the Lions still stink and will be playing from behind, Swift’s soft hand in the short passing game will leave carries to his bigger, badder backfield counterpart, Jamaal Williams.

Given the difference in the rushing + receiving yards total, bookies are projecting 550 yards receiving from the dual-threat RB — a number I’d be much more comfortable going Over (Swift had 452 rec yards in 2021) than taking him to top 850.5 gains on the ground.

Looking at the 2021 Lions, we see a team that struggled to come out swinging — save for that infamous Week 7 date with the Rams in which Campbell dialed up chaos like a pissed-off teenager playing Madden.

Detroit averaged 2.4 points per first quarter (third lowest), went scoreless in the opening frame 11 times, struck first in only six contests, and lead after 15 minutes in just four games. That said, the defense didn’t allow foes to run away in those opening quarters, giving up just five points on average — pretty good considering the Lions leaked 27.5 total points against per game.

Those results trickled down into a 5-11-1 Over/Under record for first-quarter total bettors. 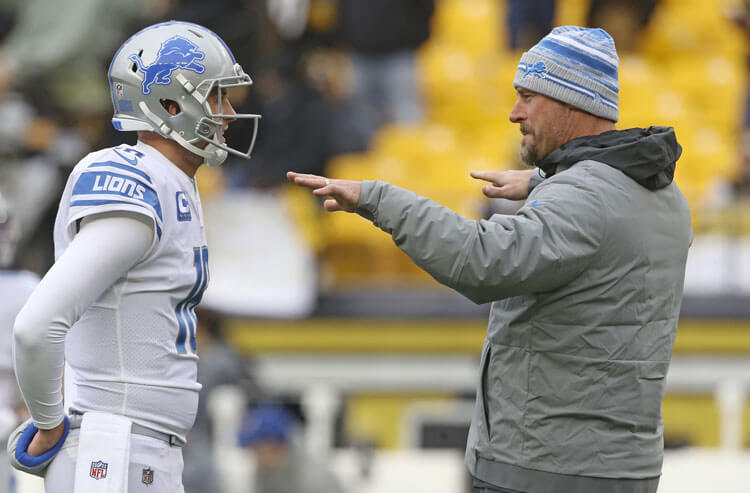