Masters Betting Odds 2023: Can Rory Get Over Augusta Hump?

Rory McIlroy is sitting alone atop the 2023 Masters odds board as he aims to complete the historic major championship grand slam. Jon Rahm and defending champion Scottie Scheffler round out the Top 3 — read more in our full Masters odds below.

The turn of the calendar means a new PGA Tour season is well underway. More importantly, it means that the season's first major championship — the Masters at Augusta National — is fast approaching.

Last year's champion Scottie Scheffler is among the favorites to defend his Green Jacket but the odds board is unsurprisingly topped by the two best golfers: Rory McIlroy and Jon Rahm.

Maybe the most notable name on the board, however, is Tiger Woods. After his shocking return to pro golf in 2022, Woods is available at as high as 65/1 to win his sixth Green Jacket.

We break it all down in our full 2023 Masters odds update below.

Favorites to win the 2023 Masters

With a plethora of Top-10 finishes to his name, the current World No. 1 has a great history here at Augusta, but will 2023 be the year he finally gets over the hump?

Since a relatively quiet first half of 2022, Jon Rahm has been firing on all cylinders as he looks to return to World No. 1. Four wins and nothing worse than T15 since the start of last season's FedEx Cup Playoffs makes Rahm the hottest golfer on the planet.

He finished just T27 here a year ago with rounds of 74-72-77-69 but otherwise has a strong history at the prestigious track. He'll be eager to get back into contention as he continues the chase of his first Green Jacket.

There will be some pressure on the current Green Jacket holder Scottie Scheffler to follow up on his Player of the Year-winning season in 2023.

And while his win here at Augusta was the final of four last season (nearly 10 months ago), he's continued to put himself in contention — making it clear that last year's success was no fluke.

Tiger Woods showed flashes of quality golf during his well-documented return to Augusta in 2022, but his body ultimately held him back from weekend contention. Rounds of 71 and 74 got him to the weekend where he ultimately fell flat with back-to-back rounds of 78.

He's played competitively a handful of times since then, most recently at the PNC Championship with his son Charlie, and while there are some encouraging signs, there are just as many reasons for skepticism as it pertains to him contending for — let alone winning — a 16th career major championship.

If you're looking to bet on some Masters action, here are two of the best bonuses* available:

Let's take a look at some recent Masters champions and their closing odds to win:

Only one pre-tournament betting favorite or co-favorite has won the Masters since Tiger Woods won in 2005 as a +350 favorite. Schwartzel was the biggest longshot to win when he surprised the golfing world back in 2011. Most recent winners fall in the +1,000 to +3,000 range.

Another trend worth noting is the age of recent Masters winners: Before Woods won in 2019 at age 43, the previous 13 winners had all been under the age of 40 at the time they won. Dustin Johnson (36), Hideki Matsuyama (29), and Scottie Scheffler (25) have continued that trend over the last three years.

The Masters is the most bet golf event of the year, so naturally, there are many who will be placing their first golf bets on the tournament. If that happens to be you, we've got you covered with our beginner's guide to how to bet on golf.

The most popular way to bet on golf is by simply picking the winner, which is referred to as an outright. There are plenty of other ways to wager, however, including top finishers, head-to-head matchups, and plenty of props. 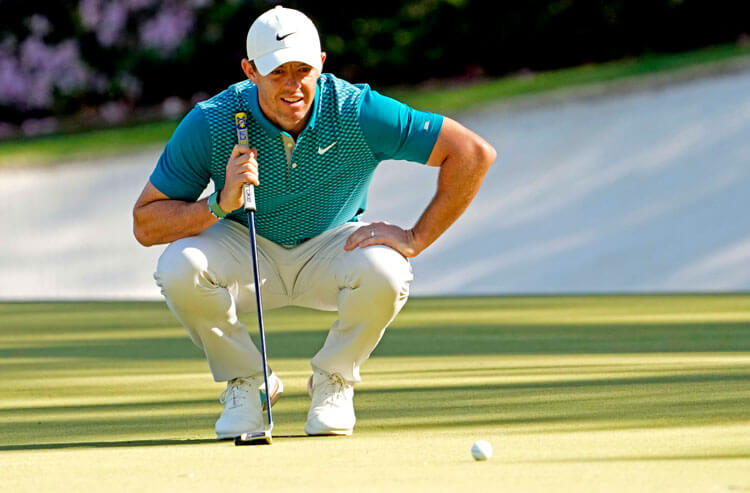 Masters Betting Odds 2023: Can Rory Get Over Augusta Hump?
Provided by