College football betting isn’t far behind the NFL when it comes to popularity at sportsbooks across the United States and Canada and many new bettors are looking to learn how to bet on college football.

College football teams play just once a week and the average team plays a 12-game regular season, and if successful enough, will qualify for a bowl game.

The time between games allows for NCAA football betting to see plenty of odds movement, and with college football as its own religion in most states, you know the betting action will be fast and furious.

How to read college football odds

The three most basic ways to bet college football are on the point spread, the moneyline, and the Over/Under, also referred to as the total. The point spread is betting on how many points one team will win or lose the game by. Betting the moneyline is simply picking who will win the game. And betting the total means predicting how many total combined points will be scored in the game.

The college football point spread is the number of points a team is expected to win or lose by, in a given game, set by oddsmakers. This levels the field of competition between the two teams involved.

If Alabama is expected to beat Ohio State by 7.5 points, oddsmakers will set Bama as the points spread favorite at -7.5 (indicated by the negative value). This means that the Crimson Tide must not only win the game, but win it by eight or more points to cover the spread.

Ohio State is thus set as the point spread underdog at +7.5 (indicated by the positive value). This means that the Buckeyes can either win the game outright or lose by seven or fewer points to cover the spread.

From rivalry games to bowl games, college football moneyline bets are as simple as it gets. You are picking a team to win a game. And based on the implied probability of winning, each team will have a moneyline value assigned to them.

In this scenario, Alabama is the -145 moneyline favorite, indicated by a negative value in front of the odds (-) while Ohio State is the +145 underdog showed positive value (+).

This means that bettors would have to risk 1.45 betting units to win one unit (ex. $145 to win $100) betting on Alabama. Meanwhile, an Ohio State wager of one unit ($100) would return profits of 1.45 units ($145). You can use our moneyline calculator to see how much you can win from other moneyline odds values.

Another way to wager on college football games is the Over/Under (or totals). Totals are the estimated combined points scored between the two teams in a game.

Props: Player performances and much more

Prop bets are some of the most fun wagers to make in college football. Prop betting allows you to focus on something other than the final score of a game. Instead, you are wagering on individual player performances, such as will Player X score a touchdown, or will Player Y rush for Over/Under 75.5 yards, or even will Player Z throw an interception.

Generally speaking, prop bets are listed Over/Under totals, like passing yards or receptions, Yes/No propositions, or specific happenings, such as the first player to score a touchdown or the result of the first offensive play of the game.

In the example below, you would need Oklahoma and Clemson to go Over 70 points, Ohio State to win or lose by seven points or less, and Notre Dame would need to win the game against USC to win all three legs of the parlay and cash the +507 bet.

Futures: Betting on the CFP and more

Futures are bets made on a long-running outcome rather than a single-game result, often made in markets such as odds to win the College Football Playoff, win a conference, or win the Heisman Trophy. Futures are often posted before the season and take bets throughout the schedule, constantly adjusting the odds to results, injuries/trades, and betting action until the futures market is decided.

Lock in your futures bet early enough and you could be looking at a nice payout. For example, if you bet $100 on Georgia to win the NCAA Football National Championship, you could walk away with a cool $1,200. But remember, your money will be tied up for the entire length of the season, so take that into account when considering your college football bankroll.

Unlike the NFL, where there can be no more than 16 games in a regular-season week, it’s not uncommon for there to be more than 60 college football games to be played in a given week given the 130 FBS teams. That provides a ton of odds options for sportsbooks to consider and even the sharpest oddsmakers can have trouble with all that data. So, shop around (Covers has a great College Football Odds page!) and find the best number possible.

There is nothing in sports like college football rivalries, and these intense matchups can create opportunities for savvy bettors. It might not matter how much better Alabama could be than Auburn in a given year, the Iron Bowl will be close more often than not.

Home underdogs do well in this spot, but maybe a team is also looking for revenge after an embarrassing performance the previous year. There are so many rivalries in college football: Notre Dame-USC, Oklahoma-Texas, Army-Navy, and so many angles to go along with them. Make sure to scan the schedule on our Scores and Matchups pages for the spots like these each and every week.

The validity of betting trends is often disputed, especially as it pertains to trends based on short-term results or limited sample sizes. However, long-term betting trends can hint at possible patterns worth following, particularly in college, where there may be plenty of roster turnover, but coaching philosophies remain intact. For example, maybe a coach has a history of getting his team ready to play as a road underdog.

Head over to our college football trends page for updated betting trends throughout the season.

Due to the physical nature of the sport, injuries have a large influence on college football betting odds.

When it comes to the odds, quarterback injuries have the biggest impact, while select skill players, like star running backs and receivers, can also move a spread up or down. Outside of those key positions, injuries to individual players don’t affect the odds much at all.

Differences between college football and the NFL

We already spoke about how there are so many more college football teams compared to the NFL, but that is also going to create a bigger talent disparity, and in turn, bigger point spreads. While a two-touchdown spread is big in the NFL, we regularly see spreads in the -20 and -30 range in NCAA football. Teams like Alabama and Clemson can thrash opponents, so know how to handle big spreads.

Another big difference between the NFL and college football is overtime. In the NFL, they play a pseudo-sudden-death overtime where each team must possess, or can possess, the ball. The exception: if the team that gets the ball first scores a touchdown on the opening possession. So, in a worst-case scenario, there is an extra nine points scored in OT.

Meanwhile, in college football, each team possesses the ball in an untimed overtime period, starting at the opponent’s 25-yard line, attempting to score. This goes on until one of the teams has the lead after an overtime period. But theoretically, teams could go back and forth forever, which has been known to crush the dreams of Under bettors everywhere.

Think you’re ready to place bets on college football? Our King of Covers NCAAF contest is perfect for that. Make real college football bets for free without having to deposit at a sportsbook. Bet the spread and Over/Under totals on the 2021-22 NCAAF season for the chance to win cash and prizes.

Football is the most bet-on sport in North America and bettors love wagering on the pros and college football games every week during the fall and winter. Make sure you place your college football bets at a site that’s safe, secure, and trustworthy. We’ve rounded up all the best football betting sites so you can make smarter football bets.

Want to learn more about college football betting and meet a large, knowledgeable community? Check out Covers’ NCAAF forum to get picks, ask questions, and learn from experienced football bettors.

How to bet on college football FAQs

Once you have done your research into which game you want to bet, you'll need to register for a reputable betting site, log in, and make the bet. Our guide above gives advice and strategy on how to bet on college football.

Yes, betting on college football is legal, assuming that sports betting has been regulated in your area.

If sports betting has been regulated in your area, make sure you register with a licensed sportsbook before making any college football bets.

If online/mobile betting has been legalized in your area, simply sign up for a regulated sportsbook and then log in and make your college football wagers.

First, head to a Las Vegas casino that has a sportsbook. Then go to the betting counter to make the college football bets that you want to place. 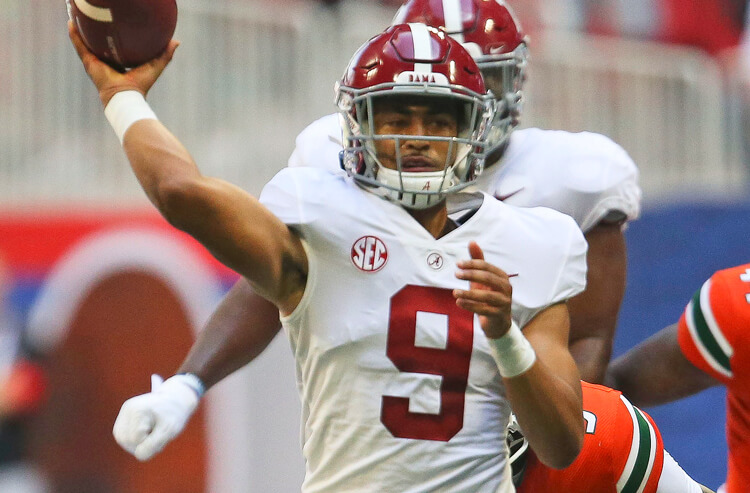 Learn How to Make Winning College Football Bets
Provided by