Golf betting odds to win the PGA Championship at Southern Hills in Tulsa, Okla on May 19-21. Scottie Scheffler is the favorite as action gets underway.

The golf world will see its second major tournament with the 2022 PGA Championship kicking off today.

Here are the latest odds to win the PGA Championship. You can also check out Tour Junkies' full lineup of best bets.

The Masters is in the rearview after OWGR World No. 1-ranked Scottie Scheffler took home his first Green Jacket. Just two months ago, Scheffler was nowhere near the top of the odds board but has jumped all the way up to the betting favorite at +1,200. Former No. 1 Jon Rahm was in lockstep with Scheffler, but is now available at slightly longer odds (+1,300).

Since Augusta, Jordan Spieth has claimed victory at the RBC Heritage and the high-powered Xander Schauffele-Patrick Cantlay pairing dominated the Zurich Classic, while Rahm got his first win of the year at the Mexico Open. Now, the odds for Southern Hills Country Club have settled in.

What a ride it's been for Scheffler. The 25-year-old opened the year having never won on Tour, but went on a run of four wins in six starts, culminating with his dominant victory at the Masters. He tops the PGA Tour money list by a considerable margin and has taken over the No. 1 spot on the OWGR list.

If Scheffler wins in Tulsa, he'll be the first golfer to claim victory at the Masters and PGA Championship in the same year since Jack Nicklaus did it in 1975. He's already come close with T4 and T8 finishes in his first two cracks at the storied tournament.

After a week off at the RBC Heritage and a ho-hum T18 finish alongside Ryan Palmer at the Zurich Classic, Scheffler should be rounding back into form just in time for Southern Hills.

Rahm has certainly lost some of last year's steam in 2022, and as a result, is no longer the betting favorite for the PGA Championship at Southern Hills.

After entering Augusta National as the solo favorite, he finished just T27 after a final-round 69. Rahm finally got the monkey off his back, however, when he won the Mexico Open.

Despite losing his status as the OWGR No. 1-ranked golfer, he has a great history at the PGA Championship and will be among the biggest threats to win.

Third on the board at +1,600 is two-time PGA Championship winner, Rory McIlroy.

Rory took the titles in 2012 and 2014 but will enter this year's PGA with finishes of T33 and T49 in his last two PGA Championship starts. He also looked great at the Wells Fargo tournament, finishing in fifth place with a -4.

We've long talked about Rory's eight-year major championship drought. If he can recapture the magic from his final-round 64 at Augusta National in early April, then 2022 might be the year it ends.

It looks like Tiger Woods will be entering his second major of the 2022 season. Last month, he took part in a practice round in Tulsa, Oklahoma as a bit of a tune-up, and will be in the field this weekend. As of this writing, Woods' odds sit at +7,000.

He hasn't been a regular fixture at the event in recent years, finishing T37 in 2020 and missing the cut in 2019 — but he did finish second in 2018, two strokes behind winner Brooks Koepka.

Prop bets are alternative wagers, beyond the more common head-to-head matchups or standard PGA Championship odds. These props can focus on overall tournament results and happenings as well as player-specific prop bets.

On tournament week, check back to see some of the best odds available for PGA Championship prop and picks from our team of golf-betting experts.

If you're looking to bet on some PGA Championship action, here are two of the best bonuses* available:

Before the tournament really gets going, oddsmakers will release odds on what they think the cut line will be at Southern Hills.

Odds to make the cut

Making the cut at a major is high stakes for even the world's best golfers. On tournament week, sportsbooks will have odds for all the most popular golfers' chances to make the cut and advance to Saturday.

Will there be a hole-in-one?

The PGA Championship hole-in-one prop is a simple Yes/No wager: Will someone record a hole-in-one during the tournament?

Will there be a playoff?

The playoff prop is another Yes/No option, allowing you to bet on whether the PGA Championship will be decided in a playoff.

The wire-to-wire winner prop is a simple Yes option, allowing you to bet on whether the PGA Championship at Southern Hills will be led by one golfer for the whole tournament.

The PGA Championship is an international affair with the field made up of the best golfers from around the globe coming to compete at Southern Hills. Nationality props segment players from different countries and regions together and allow you to bet on which one will have the best finish of that group, such as betting on the top American golfer or top European.

Phil Mickelson shocked everyone in 2021 when he won the PGA Championship for the second time in his career after previously taking the title way back in 2005. He entered the tournament at +20,000 to win, making him the biggest underdog to win the event in over a decade and one of only three winners since 2010 to emerge victorious with odds longer than 10/1 (Jimmy Walker in 2016, Keegan Bradley in 2011).

Let's take a look at some recent PGA Championship winners and their closing odds to win according to SportsOddsHistory.com:

The most popular way to bet on golf is by simply picking the winner, which is also referred to as an outright. There are plenty of other ways to wager, however. Some of the more popular markets include head-to-head betting, where sportsbooks pair up two golfers and you simply choose who you think will have the lower score over the course of the weekend or for one round only. Learn about more golf betting types and get expert tips and strategies in our how to bet on golf guide.

Where to bet on the PGA Championship

If you're in a state that allows mobile, or online betting, make sure you know which sites are the best golf betting sites. The best betting sites offer sharp odds, quick payouts and are safe and secure when it comes to depositing and withdrawing your money.

Scottie Scheffler and Jon Rahm share the best betting odds to win the 2022 PGA Championship at +1,200. Rory McIlroy, Justin Thomas, and Collin Morikawa are all right behind the two leaders at +1,400. 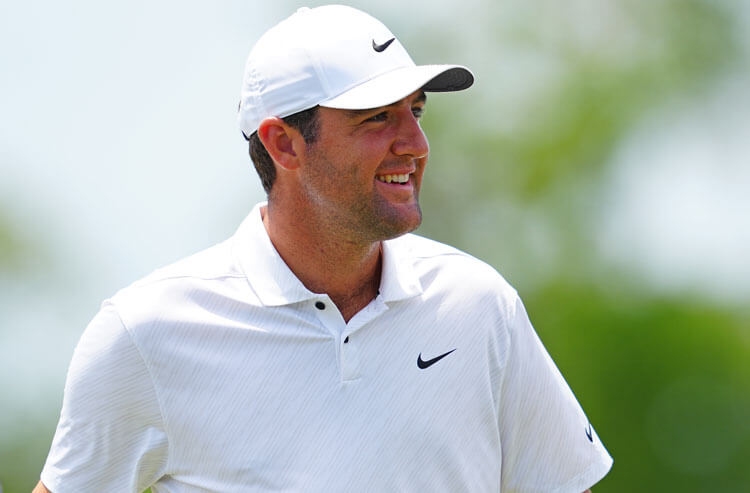