The Mercury may be a game up on the Lynx in the standings but without Diana Taurasi and Skylar Diggins-Smith, Phoenix may not have a path to victory for tonight's matchup. Read more in our WNBA betting picks and predictions below.

The news was as shocking as it was devastating. With days to go before the playoffs begin, Diana Taurasi, Phoenix Mercury star has been ruled out for the rest of the season with a quad injury.

And those playoffs are no sure thing for the Mercury either, as they now face an uphill battle absent one of their best players.

That battle resumes tonight with a showdown against the equally desperate Minnesota Lynx, similarly trying to do their best by the legendary Sylvia Fowles who is set to retire at season's end.

Read our WNBA picks and predictions with Lynx vs. Mercury set for high drama.

Use the live odds widget above to track any future line movements right up until tip-off and be sure to check out the full WNBA odds before placing your bets.

If you're signing up for a new sportsbook for the WNBA, here are two of the best bonuses* available:

The Lynx are 6-2 against the spread in their last eight games overall. Find more WNBA betting trends for Lynx vs. Mercury.

Lynx vs Mercury picks and predictions

The Phoenix Mercury are snake bitten. After battling through adversity all year, including the ongoing detention of Brittney Griner, they may see it all unravel with just a handful of games left in the season.

Losing Diana Taurasi for the year is a serious blow, both for Phoenix’s chances to make the playoffs and particularly for this game against the Lynx. DT combined for 40 points in the previous two games against Minnesota this season, and replacing her scoring is not going to be easy.

In the short term, it’s not Taurasi’s absence that is even the biggest concern, however, as Skylar Diggins-Smith, Phoenix’s unquestioned best player, is set to miss her second game in a row with a non-COVID illness. There might not be a long term to consider if the Mercury drop this game.

Phoenix quickly announced that they’d signed Yvonne Turner with their hardship exception to provide guard depth in Taurasi’s absence, but whether the 34-year-old has anything left in the tank at this point is anyone's guess.

For Minnesota, this is a prime opportunity to boost their playoff chances. At 13-20, the Lynx are a full game behind the Phoenix Mercury for the right to the final playoff spot. Critically, the Lynx own the tiebreaker over the Mercury after winning the two previous meetings against Phoenix, meaning a tie in the standings will see Phoenix fall out of the playoffs.

Despite trailing in the standings, Minnesota are more than two points better than the Mercury in terms of net rating. That gap is only going to widen with Taurasi and Diggins-Smith out.

Typically this matchup would be a perimeter vs. paint battle, with the Lynx working to dominate the glass and the Mercury pushing their advantages on the perimeter, but without their two best players, it’s unclear what advantage Mercury will have over the Lynx.

Led by Sylvia Fowles, the Lynx should dominate the boards. The Lynx are second in overall rebounding percentage and are a particularly dominant defensive rebounding team. That means fewer second chances for a Phoenix team that will need them.

Even now in the twilight of her career, DT has been Phoenix’s best on-ball perimeter scorer. Sophie Cunningham might be more efficient, but she isn’t capable of the shot-creation Diana is.

Without Skylar Diggins-Smith and Diana Taurasi, the Mercury are absolutely starved for on-ball creation and ball-handling. Diggins-Smith is the engine that gets this Phoenix offense going, and her slashing style combined with her pull-up ability would have been a nasty problem for the Lynx.

Losing both of them is fatal to an already rickety Mercury offense. The Lynx will do their utmost to shut down the paint, and without Diggins-Smith or Taurasi to bend the defense, the Mercury are going to struggle to score at all. Phoenix totals have also hit the Under in their last four straight games, and Diggins-Smith only missed one of those.

The Lynx offense might be another story, and it’s the reason to even consider the Over at this number. They’re fourth in points in the paint and second-chance points, which Phoenix has struggled with all year in Griner’s absence.

The Lynx are also a slow team. Pace can sometimes be a misleading stat because it’s a combination of both offensive and defensive pace, which represent different things. A strong defensive team that makes the opposing team play deep into the clock isn’t necessarily plodding on offense too.

But in the Lynx’s case, they really are slow on offense. They rely on a lot of older players and as a result rate poorly on things like fast break points and points off turnovers. They generate few steals as it is, and those transition opportunities are rarely capitalized on.

Taken with Phoenix’s missing offense that’s enough reason to back the Under here.

The Mercury take more threes per game (27.1) than any team save the New York Liberty, but 8.8 of those attempts have come from Diana Taurasi and Diggins-Smith is responsible for another 4.5. While the team will make up some of that volume in other places, their offense is simply not going to function normally in their absence.

A huge burden is going to be on Diamond DeShields to score and create, and the 26-year-old was already in the middle of a career-low year in efficiency while playing alongside Taurasi and Diggins-Smith.

This really isn’t a fair fight, and it’s shocking that there was ever a line available with Phoenix favored with both Diana and Skylar out of action. That’s quickly corrected, and I expect this line to move further in Minnesota’s favor as we approach tip-off.

Even if it would have been nice to get points, right now there’s still value betting the Lynx, and I’d feel comfortable betting this line right up until -4.5.

The Mercury are simply down too many key bodies and the Lynx have been road warriors lately. Minnesota is 6-2 ATS in their last eight road games.

Did you know that if you parlayed today’s WNBA Lynx vs. Mercury predictions and picks in a single-game parlay, you could win $26.45 on a $10 bet?

Use our WNBA parlay calculator to create your own parlays and see their potential payouts. 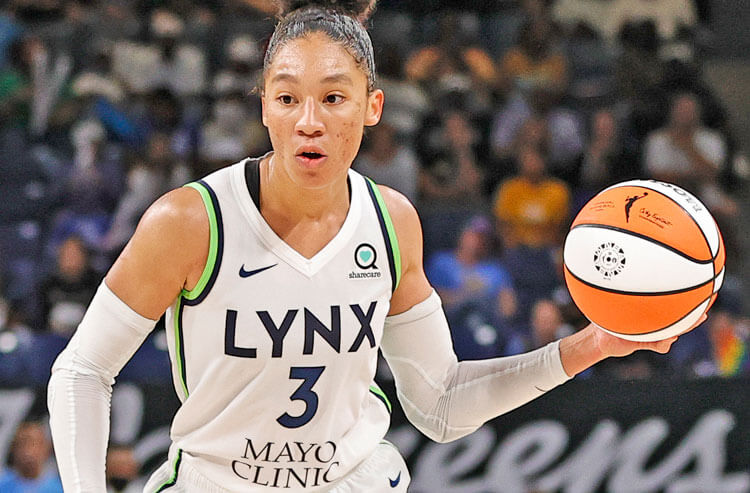 Lynx vs Mercury Picks and Predictions: Minny Covers Against Unrecognizable Mercury
Provided by