The Aces improved their title-defending core by adding Candace Parker, but will face a foe unlike any last season offered in 2023's New York Liberty. See how the WNBA championship odds are shaping up.

The Las Vegas Aces are basking in their offseason on top, but sportsbooks are already looking ahead to a potential repeat with WNBA odds to win the 2023 championship posted at most major outlets.

The Aces won the 2022 title in convincing fashion, 3-1 over the Connecticut Sun, but will face an entirely different landscape in 2023.

Las Vegas looked to bolster its title defense with the addition of Candace Parker, but a certain east coast foe has, um, upped the ante so to speak.

Check out where the top WNBA title odds contenders sit as the offseason continues to unfold.

You can't become complacent and expect to stay on top. Candace Parker and the Las Vegas Aces agreed to a deal that brings the two-time champ to the desert.

The Aces punctuated a season of relatively undisturbed excellence with a title in September, making their high-profile hiring of former WNBA All-Star and San Antonio Spurs assistant Becky Hammon look wise in retrospect.

Hammon overhauled the Aces offense, emphasizing the 3-pointer and getting a breakout, near-MVP season from Kelsey Plum in addition to a career year from Jackie Young, and an actual MVP season from A'ja Wilson. Eventual Finals MVP Chelsea Gray then caught fire in the second half of the season, giving the Aces an insurmountable attack.

Vegas will return its entire core for the expanded 2023 season and will be even more dangerous with Parker in the fold.

Looking to do some WNBA betting? Here are two of the best bonuses* available:

Sabrina Ionescu was already leading a revival in New York. Ionescu, the first overall pick in the 2020 draft, made a quick charge up the WNBA hierarchy, becoming one of the league's truly elite last season.

And apparently, the Liberty front office sensed they were ready to win now after last season's playoff berth. They started their offseason with a grand-slam trade, acquiring 2021 MVP Jonquel Jones for pennies on the dollar from Connecticut.

Now with a Big 3 to rival the Aces, New York is truly making the WNBA a two-team league next season, with no other squad priced under +1,200 as of February 1.

Sportsbooks will post odds for the WNBA Finals shortly after the previous season's conclusion. These odds are constantly adjusted throughout the offseason as players switch teams or are injured. Once the regular season begins (May), title odds will change daily as teams win and lose games and more roster changes occur. Sportsbooks will also adjust the WNBA odds based on handle and liability to certain teams.

This means that on a $100 bet, you'll stand to win $300 if the Mercury win the WNBA title. If it's close to the end of the season and the WNBA has a particularly dominant team, you might see a minus sign (-) ahead of its odds.

Above we have posted the American odds for the WNBA championship. However, these are easy to convert to decimal odds or fractional odds with our odds converter tool. And don't forget to check out our WNBA forum if you're interested in chatting with other basketball bettors about WNBA odds.

Here are some trends to keep in mind when betting on WNBA championship futures:

Teams with the most WNBA Championships

Minnesota, Houston, and Seattle are tied atop the all-time WNBA Championship tally with four apiece, while three more teams follow closely with three each.

Despite their early dominance, the Comets folded during the 2008 recession and were disbanded when the league was unable to find new ownership.

The 2023 WNBA schedule has yet to be released, but the Finals typically begin in early-mid September.

The Houston Comets, Minnesota Lynx and Seattle Storm have all won four titles, most all-time.

The Houston Comets four-peated as champs in the WNBA's first four seasons (1997-200), while the L.A. Sparks also went back-to-back in 2001 and 2002. Despite numerous teams winning two in three seasons, none has gone back-to-back since. 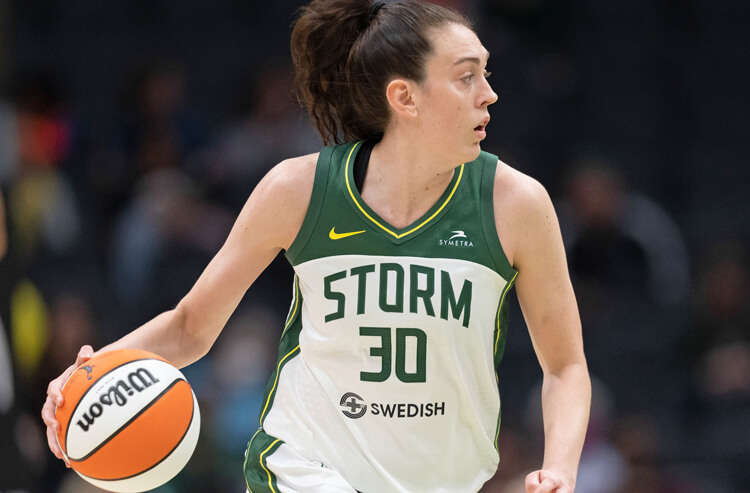