Few top names, if any, are present at the 2022 John Deere Classic, paving the way for a fresh face or resurgent veteran to claim glory. Daniel Berger and Adam Hadwin are the betting favorites at TPC Deere Run. 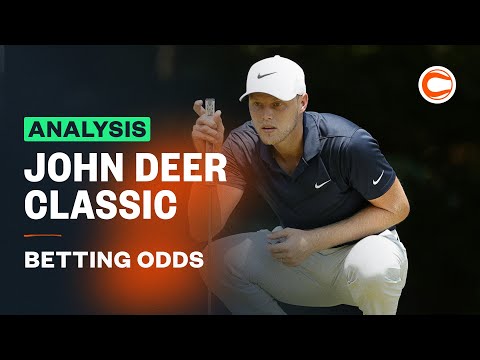 The march to the Open Championship at St. Andrews continues this week with a relaxed field set to take on the 2022 John Deere Classic at TPC Deere Run in Silvis, Illinois.

Daniel Berger and Adam Hadwin are co-favorites with no one ranked higher than 25th on the OWGR appearing in this week's field.

Here are the early odds to win the 2022 John Deere Classic.

If you're signing up for a new sportsbook for the John Deere Classic, here are two of the best bonuses* available:

New users can get two risk-free bets up to $2,000 at PointsBet! Sign Up Now

Notes on the Field

The 2022 John Deere Classic is a pretty thin field in terms of top-ranked talent as Daniel Berger (25th in OWGR) is the highest-ranked golfer playing in the tournament. Adam Hadwin, who shares top betting odds with Berger, has five Top-10 finishes on the year, which is tied for 15th on the PGA Tour. Other notable names include defending John Deere champion Lucas Glover as well as Jason Day and Webb Simpson. There is no overwhelming favorite to win.

As mentioned, Berger is the highest-ranked golfer in the field. When last seen at the U.S. Open, Berger missed the cut after shooting +5 between Thursday and Friday. Prior to that, however, he finished T5 at the Memorial and has five top-20 finishes under his belt on the season.

Berger finished T34 at the 2021 John Deere. Can he get his first win since the 2021 AT&T Pebble Beach Pro-Am and climb up the FedEx Cup rankings in the process?

Compared to Berger, Hadwin has been busy on tour this year. The 34-year-old Canadian has played in 21 tournaments and has had some definitive highs, notably a stretch of three consecutive Top-10 finishes in March with a T9 at THE PLAYERS, a T7 at Valspar, and a T4 at the Valero Texas Open.

Hadwin struggled at the PGA, finishing T71, but has made four straight cuts overall, including a T7 finish at the U.S. Open — his best result ever in a major tournament.

He's also looking to earn a spot at St. Andrews for the Open Championship in mid-July.

Like Berger, Simpson has played sparingly on tour this season. After missing the cut at the U.S. Open, Simpson rebounded to finish T13 at the Travelers last weekend.

Simpson hasn't won a tournament since the 2019 RBC Heritage, so he's looking to end a bit of a dry spell. In a field lacking top competition, this could be Simpson's time to shine.

With the field as spare as it is when it comes to top talent, there are a lot of names who could be considered long shots based on their odds. Theegala was in a position to win, or at least force a playoff with Xander Schauffele, at last weekend's Traveler's Championship at TPC River Highlands, but a double bogey on 18 — his first hole where he didn't at least make par on Sunday — bounced him into a tie for second with J.T. Poston.

It was Theegala's best finish of the year, though he's had some strong outings beyond this one. He finished T5 at the Memorial in early June and has had two other Top-10 finishes since January 1, including a T3 at the WM Phoenix Open. This is a prime opportunity for the 24-year-old to grab his first win on the PGA Tour.

The last tournament with a field remotely as thin as this one was the Mexico Open. Yes, Jon Rahm — the former World No. 1 — was a high-profile winner, but his competition wasn't superhuman.

Wu, however, made a charge on Sunday by shooting 63 to finish tied with Tony Finau and Kurt Kitayama for second place once shot behind Rahm. The 25-year-old has not won since jumping to the PGA Tour, and he's had mixed results this year. Still, the relative newcomer is facing significantly long odds against a field that doesn't inspire fear in anyone's heart.

Daniel Berger and Adam Hadwin are the current favorites to win the John Deere Classic.

The John Deere Classic will be held from June 30-July 3 at TPC Deere Run in Silvis, Illinois.

The 2022 John Deere Classic features a purse set at $7.1 million. The winner will collect $1.278 million in earnings.

Lucas Glover won last year's tournament by two strokes over Ryan Moore and Kevin Na after shooting 64 in the final round.