Denny Hamlin's looking to start the NASCAR season off on the right foot with another win in the Daytona 500. See who joins Hamlin among the pre-race favorites as the 2023 campaign gets set to kick off.

The 2023 NASCAR Cup Series season is about to kick off with the Daytona 500 on Sunday, February 19.

Denny Hamlin will look to find magic at Daytona again — where he won three times from 2016 to 2020 — but he's got company at the top of the odds board for the season's opening race.

Here are the latest Daytona 500 odds ahead of the exhibition Busch Light Clash at the Coliseum this weekend.

Odds courtesy of DraftKings Sportsbook as of February 2, 2023.

Favorites to win the Daytona 500

Hamlin's quest for his first Cup Series championship fell short again last year, but he at least gets to start each fresh season on a track he's used to dominating.

Hamlin's a former three-time winner at Daytona, posting an average finish of 4.25 over an eight-year stretch from 2014 to 2021.

Last year's season opener saw Hamlin flame out in 37th after a crash ended his day, and he'll be out for redemption, looking to start another title chase with a victory lap.

Larson, the 2021 Cup Series champ, put up another strong fight in what was a high-parity season overall, much unlike his dominant romp through the previous campaign. While he failed to recapture the magic of his 10-win 2021, he was one of the final playoff cuts before the Championship 4, and was among the Cup Series odds leaders all season.

And while Larson figures to be a contender yet again this season, Daytona hasn't been one of his better tracks, finishing no better than seventh in nine career 500 tries, with as many finishes in the thirties as the Top 10 (three).

Looking to bet on some NASCAR action? Here are two of the best bonuses* available:

Blaney's been a frequent contender at Daytona, with two runner-ups highlighting his slew of Top-10 finishes in the 500.

He finished fourth last year, and will be hungry to seal a checkered flag after a 2022 campaign where his only win was in the exhibition All-Star Race.

In fact, Blaney's last win in a points-paying race came here in 2021's Coke Zero Sugar 400, so at least he'll be on comfortable ground as he seeks another victory.

Elliott led the Cup Series championship odds for much of last season, but fell short in the finale, finishing last among the Championship 4 drivers.

He'll look to continue re-asserting himself atop the standings this season, and also seeking his first Daytona win. He finished second in 2020's 500, but has also logged many finishes in the 30s here, and isn't nearly as prolific a superspeedway driver as he is on road courses.

How to bet on NASCAR

The most popular way to bet on NASCAR is by simply picking the winner of a race, which is also referred to as an outright. There are plenty of other ways to wager, including betting on whether or not a driver will finish in the Top 3 or Top 10 of a race.

Another popular betting option is head-to-head matchup betting, where sportsbooks pair up two drivers and you choose who you think will finish better in the race, which is far easier than trying to select someone to win out of a field of approximately 40 drivers. For tips on NASCAR betting check out our How to Bet NASCAR page.

Denny Hamlin is one of four drivers with multiple Daytona 500 victories. Richard Petty leads the way with seven wins from 1964 to 1981.

Denny Hamlin and Kyle Larson are +900 pre-race favorites to win the Daytona 500.

Kyle Larson is tied for first atop the odds board to win the Daytona 500, available at +900. 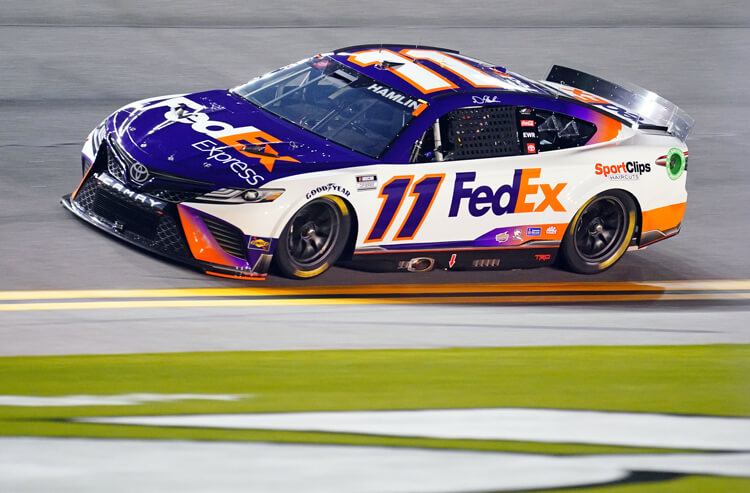