NASCAR rolls into Kansas this weekend for the AdventHealth 400, and while the race may not carry Kyle Busch's name anymore, he's still primed to repeat as one of the betting favorites. Get a breakdown of the field's prices with our AdventHealth 400 odds.

NASCAR betting odds are live for the AdventHealth 400, which runs Sunday, May 15 at Kansas Speedway.

The top of the AdventHealth 400 odds board is tighter than a piano wire, with a four-way fie for the best odds and three drivers likewise tied at second-best.

We bring you the NASCAR odds to win the AdventHealth 400, with the green flag dropping at 3:00 p.m. ET.

You can also check out our full betting breakdown in our AdventHealth 400 picks.

Favorites to win the AdventHealth 400

Larson's roller-coaster 2022 continued last weekend at the Goodyear 400, finishing a disappointing 36th after stringing together Top-6 finishes in four of his previous five races.

Still, the defending Cup Series champion has to be considered a threat on any track after he dominated last season (including a Kansas victory in the Hollywood Casino 400), although this week we're seeing him joined by several other drivers instead of being a comfortable solo favorite.

Busch's 33rd-place finish at Darlington last weekend ended a run of five straight Top 10s. While a disappointing result, he can immediately look to rebound on familiar turf, as the defending champ (last year, it was aptly named the Buschy McBusch Race).

Busch also claimed victory here in 2016, so there's plenty of Kansas success to support backing him this weekend.

Hamlin continues to see himself slotted towards the top of the odds board despite what's been a simply dreadful season for him so far. Hamlin's finished 13th or worse in 11 of 12 races so far. While that lone exception was a win in Richmond, this has been Hamlin's roughest season in recent memory — a dismal 22nd in the Cup Series standings.

Still, Hamlin's a three-time winner at Kansas, including twice in this race, and as one of the circuit's most consistent drivers for years, his regression may not last.

The overall points leader finished fifth in the Buschy McBusch Race and won Kansas' fall race back in 2018, so he has credentials here.

Currently with a sizable lead in the Cup Series standings, Elliott can look to put more distance between himself and the field in search of his second championship in three years.

Rounding out the Top 5 is a three-way tie between Byron, Chastain and Truex Jr.

Byron's hit the skids — since winning two of four races in March/April, he's finished 13th or worse in four straight.

Chastain has arguably the most impressive results in NASCAR this season, including two wins among Top-3 finishes in half this year's races.

Truex Jr. has had mixed results so far this season, currently seventh in the points standings, but yet to record a Top-3 finish.

How to bet on NASCAR

The most popular way to bet on NASCAR is by simply picking the winner of a race, which is also referred to as an outright. There are plenty of other ways to wager, including betting on whether or not a driver will finish in the Top 3 or Top 10 of a race.

Another popular betting option is head-to-head matchup betting, where sportsbooks pair up two drivers and you choose who you think will finish better in the race, which is far easier than trying to select someone to win out of a field of approximately 40 drivers. For tips on NASCAR betting check out our How to Bet NASCAR page. 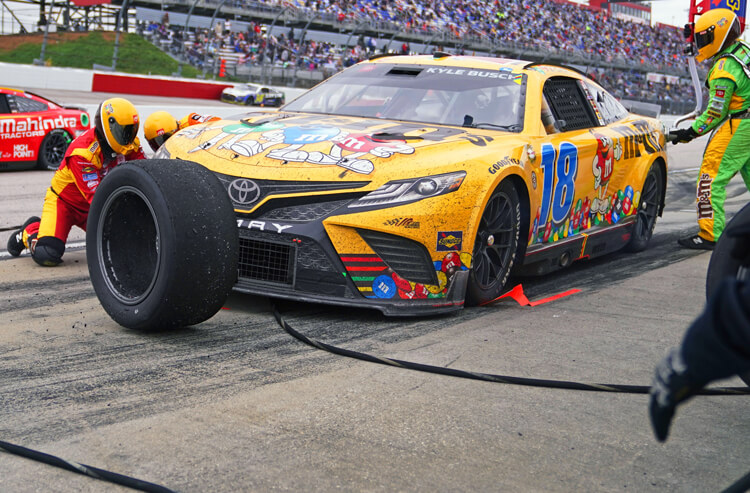 AdventHealth 400 Odds: Four-Way Tie at the Top
Provided by