Aleksandar Rakic is entering UFC Fight Night's headlining fight a -200 favorite, but we think Jan Blachowicz (+160) has the key advantages needed to force the upset. Find out how in our UFC betting picks and predictions below.

Jan Blachowicz vs. Aleksandar Rakic is the main event for UFC Fight Night betting on May 14.

This should be an intriguing matchup between a pair of light heavyweight contenders. The former 205-pound champion Blachowicz will try to climb back to the top but UFC odds opened with Rakic as a -161 favorite. Early money has come in on the surging prospect, shifting his line to as high as -200 while Blachowcz comes back at +160.

Here are our best free UFC Fight Night: Blachowicz vs. Rakic picks and predictions for Saturday, May 14 from the UFC Apex in Las Vegas.

Jan Blachowicz is the No. 1 lightweight contender and is coming off an October bout where he lost the title to current champ Glover Teixeira after getting taken down and submitted in the second round.

That defeat snapped a five-fight winning streak for Blachowicz who had claimed the vacant title with a TKO win versus Dominick Reyes in 2020 before defending it with a unanimous decision victory against Israel Adesanya last March.

The 39-year-old is 9-2 in his last 11 fights with five Performance of the Night bonuses. With his Muay Thai stand-up, Blachowicz is a strong technical striker with power in both his punches and kicks, but he also has strong grappling credentials and nine submission wins in his career.

Aleksandar Rakic is No. 3 in the UFC light heavyweight rankings and is coming off back-to-back unanimous decision wins, most recently defeating Thiago Santos last March. Rakic is 6-1 in the UFC with his lone defeat inside the octagon coming by a split-decision loss to Volkan Oezdemir.

The 30-year-old Austrian is a well-rounded fighter that combines length and dynamic kickboxing with strong wrestling.

Blachowicz vs Rakic tale of the tape

Blachowicz is coming off a poor performance against Teixeira but he's generally a much better fighter defensively. To be fair, Rakic didn't look that impressive in his last fight either, a lackluster bout against Thiago Santos where both fighters seemed scared to pull the trigger and the Austrian picked up the W with his distance-striking and control against the cage.

That approach won't work against Blachowicz who has done an excellent job against rangy distance strikers like Adesanya and Reyes and has the grappling ability to compete on the mat. It's a matchup that in many ways looks good for Blachowicz because while he isn't as fast, he's very technical in his striking, does an excellent job of controlling the pace, and defending leg kicks — one of Rakic's best weapons at range.

If Rakic tries to rely on his wrestling and control as he has in his last two fights, it'll really come to whether or not Blachowiz can defend takedowns and make him respect his power early. Unlike Teixeira, Rakic isn't a submission threat so I think Blachowicz's counter-striking ability, power on his feet, and high fight IQ give him the betting value as an underdog.

Rakic was a much more entertaining fighter earlier in his career but as the level of his competition has risen he has become less aggressive and more prone to stalling techniques. Five of Rakic's seven fights in the UFC (and each of his last three) have gone the distance.

Despite Blachowcz's famed "Polish Power", he is much more patient than most power-punchers and often prefers to probe with leg kicks in the first few rounds as he finds his range. Expect a slower pace in this one and bet on this fight lasting until at least midway through the third round. 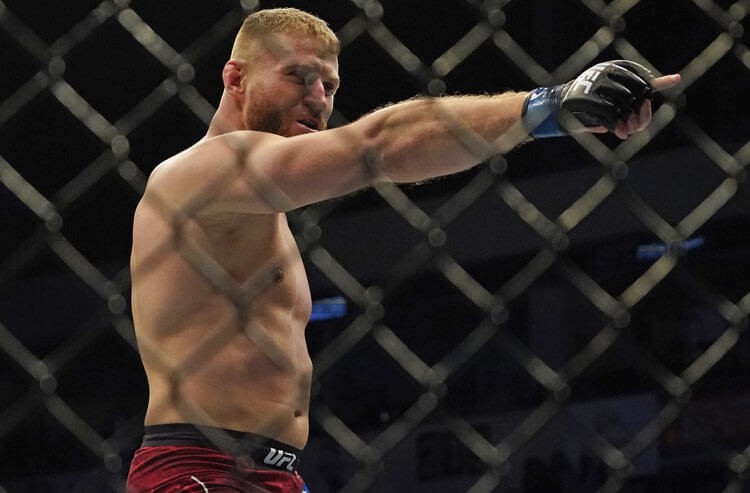 UFC Fight Night Holm vs Vieira Picks and Predictions: Holly Proves Too Much For Vieira
Rohit Ponnaiya | May 21, 2022

UFC 274 Namajunas vs Esparza Picks and Predictions: Cookie Monster Too Tough to Crack
Rohit Ponnaiya | May 7, 2022

UFC 274 Oliveira vs Gaethje Picks and Predictions: Saturday's Weigh-Ins Have Changed the Narrative
Rohit Ponnaiya | May 7, 2022

UFC 274 Rua vs Saint Preux Picks and Predictions: Eight Years and Over in a Flash
Danny Howard | May 7, 2022
About Us
Contact Us
Careers
Our Team
Brand
Testimonials