Vicent Luque enters this weekend's UFC Fight Night bout with Geoff Neal a -190 favorite. While a win by decision presents the best UFC betting value, Luque should ultimately prevail with his early-fight aggression and slim advantages being the difference.

Vicente Luque vs. Geoff Neal is scheduled for three rounds in the welterweight division as the co-main event for this weekend’s UFC Fight Night from the Apex Center in Las Vegas.

Luque is trying to course correct after a loss ruined his road to a title shot, and Neal is trying to generate momentum of his own against a Top-10 contender.

UFC odds have the able-skilled Luque listed as a slight -190 favorite. Neal, who snapped a two-fight skid in his last performance, is valued at +160.

Not frequently can we say a fighter looked better in defeat compared to a victor, but that’s what we have here for this welterweight clash.

Luque was on a tear, making a strong claim for a shot at Kamaru Usman until he was narrowly outpaced by Belal Muhammad last May. “The Silent Assassin” won four quality fights in a row, including consecutive wins via d’arce chokes, before falling to Muhammad.

Luque is second only to Vitor Belfort in the finishes per win category with a staggering 92.86% and has 11 knockouts and eight submission wins in his 21 career wins. There’s nothing “Silent” about Luque as he comes out with a vengeance, landing 5.30 significant strikes per minute at 53% accuracy and can be just as aggressive on the mat. While he tends to get hit often, Luque has yet to be stopped.

It was a bit of a minor miracle that Neal was able to put his external affairs behind him to edge out Santiago Ponzinibbio at UFC 269, but even with a DWI and weapons charge against him, that’s exactly what Neal did. The win was Neal’s first after losses to Stephen Thompson and Neal Magny derailed his momentum– not unlike Luque.

A similar build to Luque, Neal gets his work done primarily through striking all while boasting strong takedown defense. “Handz of Steel” lands 4.63 significant strikes per minute, averages 0.5 takedowns and 0.2 submission attempts per 15 minutes, and hasn’t been stopped in five years.

This fight figures to be a close one, especially as both fighters will have their moments and will definitely make a run at the winning “Fight of the Night” honors. While Luque has the edge in overall skill, Neal’s determination cannot be discounted once the fight starts getting rough.

Luque vs Neal tale of the tape

What bedeviled Luque in the Muhammad loss was that he was taken down five times despite outlanding his opponent 84-60. Neal isn’t known for his takedown game, and he’ll feel more comfortable keeping the fight standing while trying to test Luque’s defense.

While Luque isn’t as refined of a striker as Thompson, who whitewashed Neal in their fight, he’s just as dangerous and hits harder.

Neal has been outlanded in each of his last three fights. This bodes well for Luque who sets a fast pace and mixes up being busy with throwing bombs. Despite coming off a loss, the Brazilian isn’t any less legitimate as a top contender whereas Neal is right at his ceiling as a gatekeeper into the Top 10.

This could go either way, but we are liking Luque to start off strong and put Neal in a striking deficit early. He’ll maintain that early lead and weather some late charges to come out with a win. We’re rolling with Luque to win it.

These two share a lot in common when it comes to their styles and mettle, but Luque is the better man when factoring everything together.

The key is being first and staying active — something that has bedeviled Neal in his past performances. These two are hard-headed, but their chins are seemingly made of titanium, so a stoppage isn’t in the cards.

There is the off chance that this fight goes to the ground, and Luque’s improved wrestling could result in an unlikely submission, but we see this going the distance with Luque coming out the winner.

We’re taking Luque on points at +250 as our best bet for the fight.

Pick: Luque to win by decision (+250 at DraftKings) 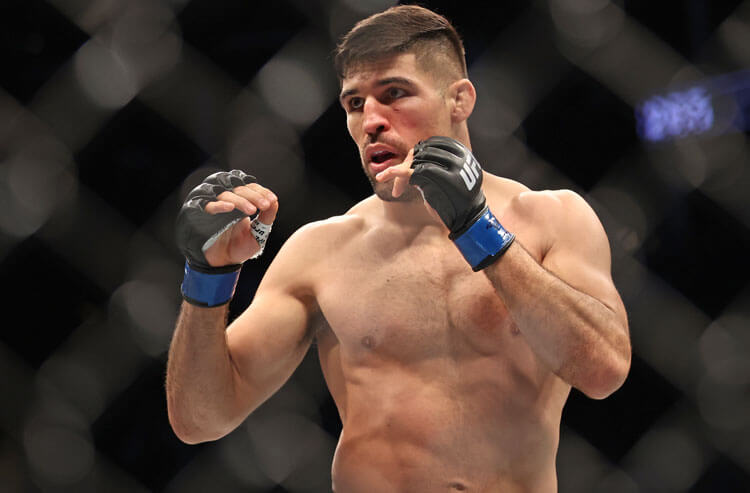