Kai Kara-France will have his work cut out for him in UFC 277's co-main event, with the scrappy Brandon Moreno hungry for another title and comfortable both on the mat and striking. Our UFC betting picks don't see an upset — or a short fight.

Brandon Moreno vs. Kai Kara-France is scheduled for five rounds in the flyweight division as the co-main event for tonight's UFC 277 in Dallas. A rematch of their fantastic UFC 245 encounter, the interim flyweight title is now at stake between these top-ranked rivals.

Ex-champ Moreno is favored to repeat his victory over Kara-France with UFC odds instilling him as a -205 favorite. Kara-France has fought his way to the top, but finds himself a +175 underdog ahead of his final hurdles to claim a title.

Let's break down our Moreno vs. Kara-France picks and predictions for July 30.

B) Brandon Moreno Win by KO/TKO/DQ BOOSTED to +525 at Caesars! Claim Now

When these two faced off over 18 months ago, Kara-France stormed out of the gates with a great opening round but couldn’t maintain the torrid pace as Moreno outworked him to win a decision. Time has passed, but these two have gotten better ahead of what should be another competitive rematch. Moreno is coming off a brutal trilogy with Deivison Figueiredo, where he went 1-1-1 as the flyweight title changed twice in their titanic brawls.

Moreno averages an impressive 1.84 takedowns per fight and is a terror on the ground. Up top, he’s a decent striker who relies on a sharp jab and body shots to help open up his ground game. 11 of his 19 wins have come by submission, and he has incredible resolve as he showed in his wars with Figueiredo.

Kara-France has won four of his last five since the loss to Moreno, with his most impressive performance being his most recent, handing Askar Askarov his first defeat by decision. A strong kickboxer with a debilitating offense, Kara-France has scored three finishes in his last four wins.

“Don’t Blink” is an aggressive striker who opts to keep the fight standing, and can be a real problem if he maintains momentum. He lands 4.84 significant strikes per minute and stuffs 86% of takedown attempts. 11 of his 24 wins have come by knockout, and he’s as tough as a two-dollar steak where he just won’t stop coming after his opponent.

With one fighter being a ground specialist and another a striking specialist, this fight will be decided on who can control the center of the octagon. In their first fight, Moreno was able to take the best Kara-France had and left him in the dust, but the strain of the Figueiredo fights looms over him. Kara-France has to test Moreno’s resolve early like before, but needs to adjust and not repeat the same telegraphed approach that cost him the first time around.

Moreno vs Kara-France tale of the tape

While both fighters have surged since their first encounter, Moreno ascended to the top of the mountain and is still in prime position for a fourth fight against the champion. He also exhibits a complete skill set and was able to go shot-for-shot against the larger Figueiredo, at times outstriking him and submitting him in their second fight.

There is also the fact that he’s engaged Kara-France head on and proved too complex of a striker. Beating Kara-France at his own game twice is a big ask, but he may not have to when we look at Kara-France’s recent performances. Askarov and Rogerio Bontorin took him down on the mat and controlled him for roughly four minutes on average. Giving Moreno that much time on the ground is a recipe for disaster.

Moreno has ascended to the true elite of the flyweights, and while Kara-France is a worthy challenger, there’s still the sense that Moreno is a bridge he can’t cross. We’re going with Moreno to once again defeat Kara-France.

Pure grapplers won’t last long against Kara-France’s aggression, but Moreno has shown that he can hang with bigger strikers and still come out on top. Mentally, he knows that he can take what his opponent dishes out and will inevitably take him to the ground later in the fight.

Since the first fight went the distance and Moreno only has one stoppage beyond the fourth round in his entire career, this should figure to be another distance fight with Moreno picking apart Kara-France as the fight goes along. We’re rolling with Moreno to come up a winner on the cards at +140. 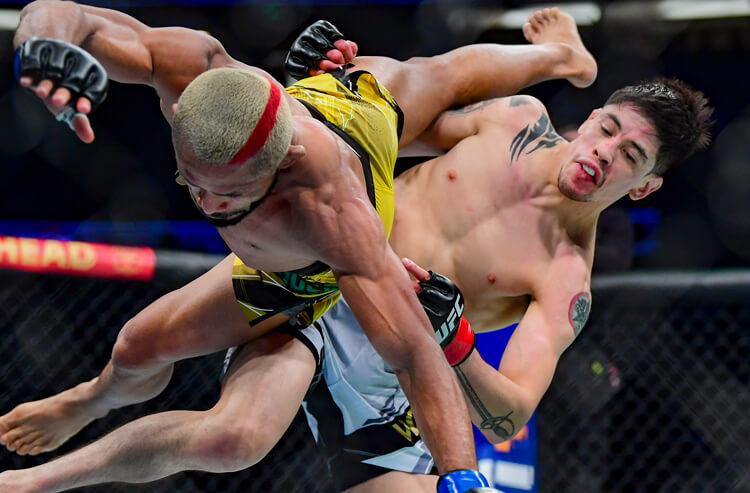 UFC 277 Moreno vs Kara-France Picks and Predictions: Moreno Goes the Distance
Provided by