Giants vs Padres Picks and Predictions: Friars Finding Their Footing

The San Francisco Giants and San Diego Padres conclude a three-game series when they meet Wednesday. The NL West foes split the first two games, with the Giants taking the first 1-0 and the Padres coming alive for a 7-4 victory in the second.

It hasn’t been all sunshine and rainbows for the Padres (62-51) since their trade deadline acquisitions, as they are just 2-4 in the six-game since remaking the lineup.

Check out our MLB picks and predictions for the San Francisco Giants and San Diego Padres on Wednesday, August 10.

The Padres opened as -161 favorites at home. Currently, they reside between -156 and -168 depending on the book. The total is set at 8.5 across most books, although a flat 8 is also available.

Use the live odds widget above to track any future line movements right up until first pitch and be sure to check out the full MLB odds before placing your bets.

Sean Manaea (6-6, 4.74 ERA): Things haven’t gone well for the left-hander during his first season in San Diego. After six effective seasons with the Oakland Athletics, his 4.74 ERA is the highest of his career. He has a 4.08 xERA and has mostly struggled with walks, as his 8.8% walk rate is a career-worst number. He’ll look to rebound after allowing eight earned runs on 10 hits in only four innings against the Los Angeles Dodgers in his last start.

The Giants are just 1-9 in their last 10 games against a team with a winning record. Find more MLB betting trends for Giants vs. Padres

Giants vs Padres picks and predictions

When evaluating these two starting pitchers, some might assume that San Francisco has the advantage because Jakob Junis’ 3.05 ERA appears much better than Sean Manaea’s 4.74 ERA. I would recommend caution for that assumption, as the other numbers tell a slightly different story.

Junis’ profile is not one that instills too much confidence. His .269 BABIP is the lowest of his career by 25 points despite his groundball rate (44.5%) remaining constant, so it appears as though he’s had some batted ball luck.

Considering his 6.4%-barrel rate, it seems as though batters aren’t having much difficulty in making solid contact, so I’d expect some regression. His 4.02 xERA is likely more indicative of what to expect going forward.

Manaea hasn’t had the success this season that he’d been hoping for, but his 4.08 xERA is a positive sign that his 4.74 actual ERA is inflated.

At the plate, the Giants haven’t been much to speak of lately. They rank 24th in wOBA and 21st in wRC+ over the last 15 days. The Padres haven’t clicked since the new additions of Juan Soto, Brandon Drury, and Josh Bell arrived at the trade deadline. Still, it’s apparent that this is one of the best lineups in the league and that they’re head and shoulders above this San Francisco team.

The Giants have been pretty good against left-handed pitching on the season, ranking ninth in both wOBA and wRC+.

One thing working in their favor is that they’ve been great at drawing free passes as a team lately, ranking fourth in the league with a 9.2% walk rate over the last 15 days. The biggest concern about Manaea’s profile is that his 8.8% walk rate is the highest of his career by nearly a full percentage point, and the Giants will be happy to take a patient approach.

The Over is 5-1 in the Giants’ last six road games and is 5-2-1 in their last eight games against the NL West.

The Padres’ new pieces haven’t gelled the way the front office anticipated, but it’s evident that this is a deep and potent lineup that is among the league’s best. The Over is 3-1-1 in their last five games against a right-handed starter and there’s reason to expect them to have success against Junis.

Junis’ 3.05 ERA is a bit misleading, as he pitches to contact (21.1% strikeout rate) and allows batters to barrel the ball 6.4% — a concerning number. Somehow, that’s resulted in Junis having the lowest ERA of his career, thanks primarily to a career low in BABIP and a career-high in loft-on-base percentage.

All things considered, he’s due for some regression, and this Padres lineup will be happy to oblige.

The Over is 8-3 in the last 11 meetings between these teams and Wednesday’s game has a good chance of extending that streak.

We’re riding with the Padres as the best bet for Wednesday’s game.

The Giants have been trying to keep their heads afloat in the NL Wild Card standings, but this doesn’t appear to be a dangerous team at this point. They’ve struggled against good competition, going just 1-9 in their last 10 games against teams with a winning record.

Manaea was roughed up in his last start, but this could be a bounce-back spot against a Giants team that is just 2-8 in its last 10 road games against a left-handed starter. 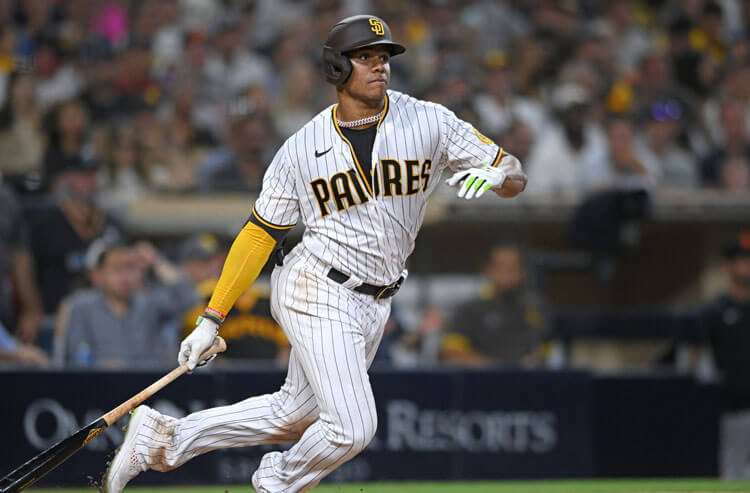 Giants vs Padres Picks and Predictions: Friars Finding Their Footing
Provided by

Phillies vs Astros Picks and Predictions: Keeping Runs Off the Board in Finale
Andrew Caley | Oct 5, 2022