Toronto Raptors Player Next Team Odds: Who Could Be Heading South?

The Raptors are currently six games below .500, sitting in no man's land of the Eastern Conference standings. With Masai Ujiri expected to sell at the trade deadline, we're taking a look at the next team odds for four key players as February 9 looms.

It feels like the entire league is waiting to see what the Toronto Raptors will do heading into the 2023 NBA trade deadline.

Simply put, the Raptors' season has not gone to plan. The offense from guys not named Pascal Siakam has been stagnant, Scottie Barnes hasn’t exactly taken the next step in his development, and even their defense hasn’t played up to expectations.

That has led to some inconsistent results as the Raptors are a handful of games below .500. They're not good enough to be a contender in the Eastern Conference, but also not terrible enough to get an important spot in the NBA Draft lottery.

With a surplus of moveable pieces, Toronto could be the first domino waiting to fall that sets off a flurry of activity leading up to the February 9 trade deadline. I break down the odds for where some of those players could end up next.

Fred VanVleet is the best bet to remain a Raptor through the trade deadline, but if I am Masi Ujiri, the star point guard is the one I'm trying the hardest to move.

A year after earning his first All-Star nod, it’s been tough sledding for VanVleet. The 28-year-old has battled inconsistent shooting and injuries for almost a calendar year now.

He is playing a little better of late, and when he catches fire, he can be one of the deadliest shooters in the NBA. He’s also a smart defender, so that will also help attract the attention of contenders.

Then there is VanVleet’s contact. He has one year left on his deal, which is a player option. The general thinking is that he will opt out and try to snag another big deal, and it's already been reported that the Magic and the Suns are interested in signing VanVleet this offseason if he does indeed plan on opting out.

Additionally, Scottie Barnes has also struggled in his sophomore season. The Raptors might be interested in getting him going by making the small forward a more prominent ball-handler in this offense. A way to do that is by simply moving VanVleet.

Gary Trent Jr. is in a somewhat similar spot to VanVleet. The Raptors' shooting guard has a player option following this season which he is likely to opt out of in hopes of securing himself a nice bag in free agency. That makes him a viable trade candidate for the Raps.

Trent is also doing a solid job of building up his trade stock, putting up a career-high 18.5 points per game as a strong 3-point shooter. He can create his own shots and gives a strong effort on the defensive end of the floor, and a playoff-bound team can never have enough 3-and-D guys.

The only thing that could hold the Raptors back from dealing Trent could be the return. Since it would more than likely be a rental situation, the package Toronto gets back from moving Trent might not be as shiny as some of the Raps’ other assets.

O.G. Anunoby is the most intriguing among these four players that the Raptors could potentially part with.

That’s because Anunoby is the most desirable of all the Raptors’ assets. Anunoby is an elite defender who can guard anyone on the court, and he leads the NBA in steals this season. While he can be a bit of a streaky shooter at times, he is a career 37% shooter from 3-point range and is an underrated athlete.

He still has some work to do when it comes to creating off the dribble. That said, Anunoby checks all the boxes for a potential contender. Because he has at least one more year left on his contract after this season, the return would also be much better than a trade involving Trent or VanVleet.

However, Masai Ujiri might value Anunoby more than most, as he perfectly fits the mold for what the Raptors are trying to build and is still just 25 years old. There’s a good chance Ujiri would want to resign Anunoby to build around him and Barnes, so I really do think someone would have to make Ujiri an offer he can’t refuse.

Looking to bet on some NBA action? Here are two of the best bonuses* available:

I personally think Pascal Siakam is the longest shot to get moved before the deadline, and it would take a crazy offer to pull the trigger on a deal.

After being named to the All-NBA team for the first time in his career, Siakam has carried that play over into this season. Spicy P is averaging 25.1 points while shooting 47.5% from the field. He’s also adding 8.2 rebounds and 6.4 assists per game while playing solid defense, and his stock has never been higher.

There’s also the question of if the Raptors do blow up this roster... would his age and contract fit the Raptors' new timeline for contention? Siakam is still due another $37 million next season and will be 30 years old before getting the chance to test free agency.

Siakam certainly fits the Masai-preferred prototype.... he's tall, long, athletic, and can handle the ball and defend multiple positions. Once again, it would take an offer that would have to blow Ujiri away to consider parting ways with the All-Star. 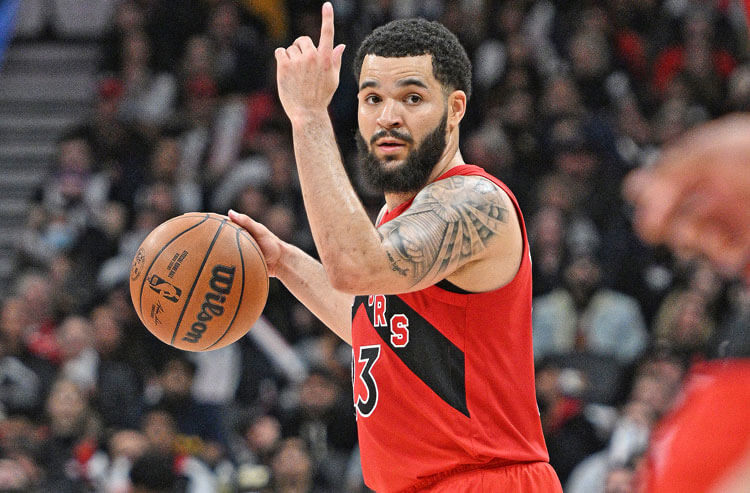 Toronto Raptors Player Next Team Odds: Who Could Be Heading South?
Provided by

Lakers vs Pelicans Picks and Predictions: Davis Back in Form on ESPN
Rory Breasail | Feb 4, 2023