Toronto has dominated the recent matchup with Chicago as the home side, and simply look to be in better form at the moment. See why this matchup shouldn't buck any of the recent trends as we break down our Toronto FC vs. Chicago Fire picks.

The bottom two teams in the MLS Eastern Conference will square off Saturday evening, when the Chicago Fire travel north of the border looking to jump Toronto FC in the standings. The Fire seek their first win at BMO Field in nine years, and are mired in a nine-match winless streak this season.

Toronto will hope to pick up their fourth home victory of the season — and possibly their first clean sheet in 22 matches — against a Fire side that has scored the fewest goals in MLS this season. Can Chicago finally get a victory in the series, or will Toronto push their unbeaten run against the Fire to 14 straight matches? Find out in our Toronto FC vs Chicago Fire picks and predictions for Saturday, May 28.

The fans and players at BMO Field will enjoy pleasant temperatures in the mid-60s throughout the match on Saturday, with zero chance of precipitation. Winds will be minimal and should not impact the match.

Bob Bradley’s struggles this season have continued, as Toronto’s manager has tried in vain to get his youth movement to form a cohesive unit. Between injuries, poor defensive play, and inconsistent performances, Toronto are in the midst of a six-match winless run. Their 2-2 draw last weekend with DC United ended a five-match skid, as Jonathan Osorio returned to the lineup and scored a 90th minute equalizer to claim a share of the points on the road. The match ran their clean sheet drought to a club-record 21 matches in a row, as well.

Sitting just one spot ahead of Chicago at the bottom of the Eastern Conference, Toronto will take solace in the fact that their home form hasn’t been all that bad. They’ve gone 3-3-0 at home, but their defense has been much better in front of their fans than it has been on the road. The Canadian outfit has conceded just six goals over their last five home fixtures, compared to 12 goals in their last five away. Toronto has also taken a result in their last 10 home matches against Chicago.

The Fire started the season decently, just like Toronto, claiming two wins in their first four matches. Things quickly fell apart, however, as they're in the midst of their worst winless streak in four years. Their nine-match winless run includes six defeats, and they've lost four of their last five matches on the road. They fell 1-0 last weekend at NYCFC, as they failed to find the back of the net for the seventh time this season. The result could have been worse, as the hosts missed two terrific chances.

Chicago’s 11 goals scored in 2022 are the fewest in MLS, in large part due to their inability to maintain possession long enough to build up an attack. They've completed the seventh-fewest passes in MLS this season, and have been caught offside 30 times, the second-most in the league. They rank in the Bottom 5 teams in passing completion rates for short, medium, and long attempts, and have completed just 379 progressive passes in 13 matches.

Neither of these teams are playing well at the moment, but Toronto seems to at least be building some cohesion. After having to utilize a few different formations due to injuries and suspensions, Bradley has deployed Toronto in a 4-3-3 setup for each of their last three matches. It has led to a better defensive shape, as they've conceded just four goals in that span, with two of those coming in the 90th minute or later. While they’ve scored just two in that same time frame, they've compiled an xG of 4.51 in the three fixtures. In addition, four of Toronto’s last five defeats have been by only one goal.

Toronto have won six of the last 10 meetings between these two sides at BMO Field, and 10 of the last 13 meetings overall. They took both matches last year, and are simply the better team at the moment. I never like to bet against a long-term trend such as this one, especially when the team on the winning run seems to be playing better and is playing at home. Give me Toronto at a very favorable price to continue their run of dominance in the series.

Continuing the trend of Toronto being the superior team in this matchup, Chicago has conceded multiple goals to their northern rivals in each of the last 11 meetings. Toronto has also found the back of the net twice in each of their three home victories this season, and have been held scoreless just once.

Chicago’s defense has been quite porous away from home, allowing multiple goals in three of their last four matches. They’ve conceded a total of 11 goals in that time frame, and NYCFC had some inexplicable misses last weekend as they racked up a 2.17 xG. Chicago’s opponents have found the back of the net multiple times in five of their last six matches, and it’s very likely Toronto will be the next team to join the list.

In each of Chicago’s last five matches away from home, they've conceded the opening goal of the match. They've not scored first in any of the nine matches on their winless run, in fact, and have failed to score in three of their last five away matches altogether. Conversely, Toronto has scored in five of their six home matches this season. Adding to their dominance in the series, Toronto has opened the scoring eight times in their last 11 meetings.

With multiple players finally fit and healthy, Toronto will field one of their best lineups of the season this weekend, especially in attack. Toronto has scored nearly two-thirds of their goals this season before the halftime break, and I expect them to come out on the front foot in what they view as a terrific opportunity to grab three points. This match will not be a 0-0 draw, and given Chicago’s struggles at the offensive end, I see little chance that Toronto won’t be the first team on the score sheet Saturday evening. 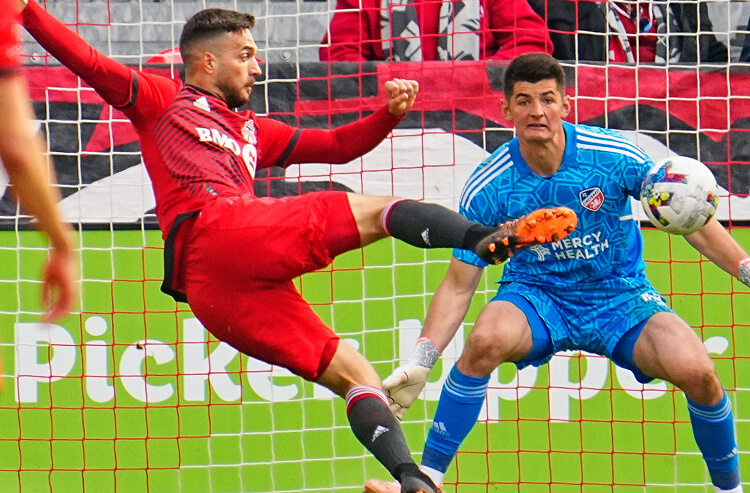