Sparks are bound to fly when bitter rivals Orlando City SC and Atlanta United FC clash Sunday. We're expecting early fireworks and for both sides to get involved on the score sheet — see why with our MLS betting picks.

Sunday will feature the latest edition of one of the most heated rivalries in all of MLS, when Atlanta United plays host to Orlando City at the Mercedes-Benz Stadium. The Five Stripes will hope to win consecutive matches for the first time all season, while the Lions hope to maintain their strong record against their rivals under manager Oscar Pareja.

Injuries have plagued Atlanta United, but a recent tactical shift along with some new reinforcements have the side hopeful that the playoffs may still be in reach. Orlando must solve their offensive woes or risk seeing a strong start to the season slip by the wayside. Check out our Atlanta United vs Orlando City picks and predictions for Sunday, July 17 to see how to bet on this match.

It’s going to be a muggy day in Atlanta on Sunday, with temperatures in the low 90s and a heat index nearing 100 degrees. Rain is not expected, and winds will not impact play inside the Mercedes-Benz Stadium.

So far this season, Atlanta United have had 19 different first-team players miss time due to injury. It’s resulted in a back line that currently has just one fit starter from their projected first-choice defense — including goalkeeper. Star center back Miles Robinson and keeper Brad Guzan have been sorely missed, and it’s led to the side conceding the fourth-most goals in MLS so far this year.

It’s also been a major factor in an inconsistent campaign that has seen them claim victory just three times over their last 14 matches. New loaned-in defender Juan Jose Purata from Tigres should help, after making his first start against Real Salt Lake on Wednesday.

"Some players ... don't appreciate the jersey, what we've [done] for a long time. The injuries are not the problem."
Strong comments from @JosefMartinez17 after Atlanta United's 3-0 loss tonight. Full answer below is worth a listen. pic.twitter.com/Wj1KTjsC7W

Following a 3-0 loss to Austin last weekend, the worst home defeat in franchise history, star striker Josef Martinez laid into both his teammates and the front office in a rant to the media that has garnered plenty of attention. It also may have worked, as they looked much improved in their 2-1 win over Salt Lake on Wednesday.

Also helping may have been a shift to a three-man central defense, the second time they’ve employed the tactic over the past few weeks. In both such outings, Atlanta has been more organized defensively, allowing their fullbacks to take more risks in attack–key for a side that leads the league in total shots and shot-creating actions per 90 minutes.

As for the visitors, it’s been a frustrating season for Orlando City fans. The team has been wholly inconsistent, as they’ve managed to procure consecutive victories just once. In fact, they’ve already recorded three stretches this season where they’ve followed a win with a draw and then a defeat. Still, they’ve managed to grind out results and sit fifth in the conference, despite having the fourth-lowest xG mark in the league and the fifth-worst goal differential in the East.

Orlando’s struggles have been most prominent in two area: creating chances and second-half play. They’ve been outscored 21-12 after the intermission this year, despite trailing just three times at the break all season. A large cause for this is their lack of a true playmaker. Their attack features plenty of players who can finish a chance, but Pareja’s system requires intricate passing buildups that simply lead nowhere. Orlando’s 11.1 shots per 90 minutes are fifth-fewest in the league, and despite having the fourth-most progressive passes in the league, they rank in the bottom half in touches inside their opponent’s 18-yard box.

This is such a tough match to predict, for a multitude of reasons. That said, the match result play I have the most confidence in is for Orlando to win the first half. I think Atlanta should win the match, but their inconsistency this season makes it difficult to stomach the juice required for that play. I also am not sure how much the fatigue will carry over for Orlando after their match on Wednesday in Colorado. However, Orlando have been a very strong first-half side this season, as they’ve trailed at intermission just three times in 20 matches. They’ve also conceded just eight goals before the break.

Conversely, Atlanta has led after 45 minutes just three times this season, and have conceded nearly a goal per match before the break on average. In addition, they’ve led Orlando at the break just once in their last six meetings. Avoid the heavy juice required to play a double-chance wager, by instead taking Orlando City to lead at the break — with a draw returning your stake.

Prediction: Orlando City draw no bet first half (+160 at BetMGM)

Sticking with the first half, this is a prime spot to get a solid return on a first-half Over. These two sides like to attack and go at each other early, with three of the last four meetings featuring multiple tallies before the intermission. The trend has been a strong one in Atlanta’s home schedule this season as well: only twice in their 10 home fixtures have fewer than two goals been scored before halftime.

While Atlanta may have found some success with their tactical changes, they’re still going to be a bit vulnerable at the back. Orlando’s struggles come most often with teams who sit back and force them to find passing lanes, which shouldn’t be an issue in this open-play style. Meanwhile, Atlanta’s attacking mentality will provide them opportunities and should lead to an exciting opening 45 with plenty of chances. This makes for a very enticing price on the first-half over, and a terrific chance to return a profit.

For me, the simplest bet in this match is to forget trying to pick a winner, and simply root for the chaos that is bound to ensue. Just once in Atlanta’s last 12 matches has the total failed to reach at least three goals, and eight of their 10 home fixtures have seen that mark reached. In addition, it’s held true recently in the rivalry, with three of the last four meetings seeing anywhere from three to five goals scored.

Digging further, seven of Atlanta’s 10 home matches have ended with both teams finding the back of the net this season. The visitors have scored in eight of their 10 matches away from home in 2022, and have been shut out just three times all season. Combine Atlanta’s high-intensity offense and their defensive issues at the back, with an Orlando side that seemingly always finds a way to score, and this is a terrific play at a solid price. 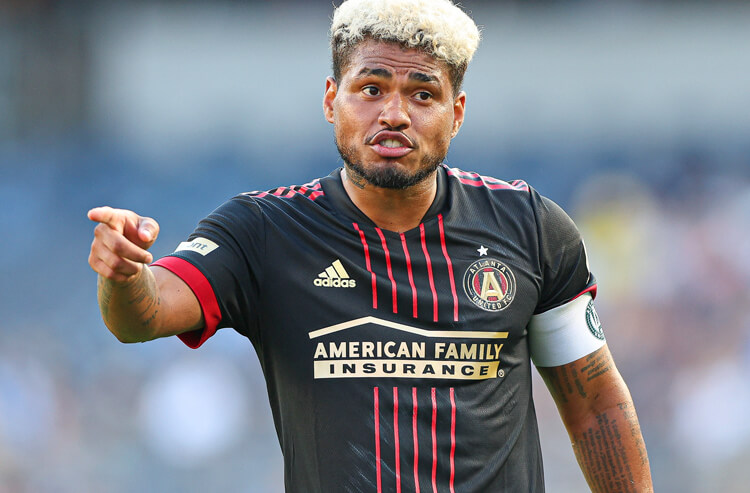