USA's 2022 World Cup Odds: Americans Not Favored to Advance Out of Group Stage

The USA is back in the World Cup finals, but despite being ranked 15th in the world — and a Pot 2 team for the draw — books are throwing shade with the Americans' 2022 World Cup odds, setting them as underdogs to even advance out of Group B.

The USMNT reached the Round of 16 (or better) in three of four World Cup appearances before a disappointing failure to qualify in 2018.

The USA is back in 2022 however, punching its ticket to Qatar with a strong CONCACAF qualification run — and the Red, White, and Blue have their eyes set on another deep run.

However, despite being a Pot 2 team, oddsmakers aren't as bullish with the USA's World Cup odds, and expect the squad to have trouble even getting out of Group B.

What's interesting about the USA's group-based odds is that, despite being a Pot 2 team (and ranked 15th in the world), the Americans are actually underdogs to advance out of the group stage, sitting at even money to reach the knockout round third in odds (+550) to win Group B...

Obviously, these odds are based on Wales, led by veteran Gareth Bale, being the final team in this group, but if it is Ukraine or Scotland, expect the USA's group odds to increase dramatically.

As for the teams we do know the USA will face, the Pot 3 representative will be 21st-ranked IR Iran, who is just 2-13 in its World Cup career... but famously upset the Americans in 1998 and will be led by a dynamic duo of center-forwards in Bayern Leverkusen's Sardar Azmoun and FC Porto's Mehdi Taremi.

Then there's the big dog of the group — England, which is one of the true elite squads in this tournament (sitting tied for second in overall World Cup odds). The Three Lions boast veteran talent in Harry Kane, Raheem Sterling, and Jack Grealish, to go along with rising stars Mason Mount, Phil Foden, and Declan Rice, resulting in one of the deepest and most dangerous England squads in recent memory.

Of course, there's still the weight of a nation weighing on this squad, which has still not famously won a World Cup since 1966.

The USA getting even money to finish Top 2 in the group (despite being the second-highest ranked team) could become a steal if Wales is upset in the UEFA play-in game.

Although considering the Americans are just 3-2-1 in their last six games in CONCACAF qualifying, oddsmakers may be looking at their recent form, which makes their +10,000 odds to win the tournament — in the neighborhood of Poland and Senegal — make a little more sense.

Neither player has been particularly prolific in terms of goal scoring, with Pulisic netting four goals in 15 Premier League appearances this season and scoring just five goals through CONCACAF qualifying (three coming in one game) — and he led the club.

Reyna has two goals in eight caps for the Bundesliga's second-place team, but his role on the USMNT is still unclear as he has only played three matches for the club since September 3, 2021 — never playing more than 45 minutes — missing 10 games in between due to injury.

The 22-year-old Weah has yet to score in 22 appearances as a reserve for Lille, while Aaronson has three goals in 21 games for RB Salzburg but missed each of the USA's last three matches with a knee injury.

Notable American omissions from the Golden Boot board include Juventus midfielder Weston McKennie, who was emerging as one of coach Gregg Berhalter's better offensive talents (with two goals in seven appearances) before suffering a broken foot, plus Ricardo Pepi — a 19-year-old forward who has three goals in 10 career national team appearances and likely is the team's best pure goal-scoring talent.

The USA will open up on November 21 against the team TBD — which could likely determine its group stage advancement future — before meeting with powerhouse England and then finishing up with IR Iran. If Berhalter's group does manage to reach the knockout round, they would have a matchup with the top teams from Group A, which includes the Netherlands, Ecuador, Senegal, and host Qatar.

Betting on the FIFA World Cup is an extremely popular futures betting option and outright odds usually come out soon after the previous World Cup winner is crowned.

These odds will adjust based on how countries and players perform leading up to the World Cup. Sportsbooks will also adjust the soccer odds based on handle and liability with certain nations.

Futures odds are displayed in list form, showing each option and its odds — most often ranked from best chances to win to worst. You will usually see a plus (+) sign in front of a team's futures odds, like this:

This means that on a $100 bet, you would stand to win $10,000 if the Americans won the World Cup. As we get closer to the World Cup final or if one team has been extremely dominant, you might see a country with a minus sign (-) ahead of its odds.

Above we have posted the American odds for the FIFA World Cup. However, these are easy to convert to decimal odds or fractional odds with our odds converter tool.

The USA will face England, IR Iran, and whoever qualifies from Wales/Ukraine/Scotland in Group B.

The USA's first 2022 World Cup game is Monday, November 21, against either Wales, Ukraine, or Scotland. 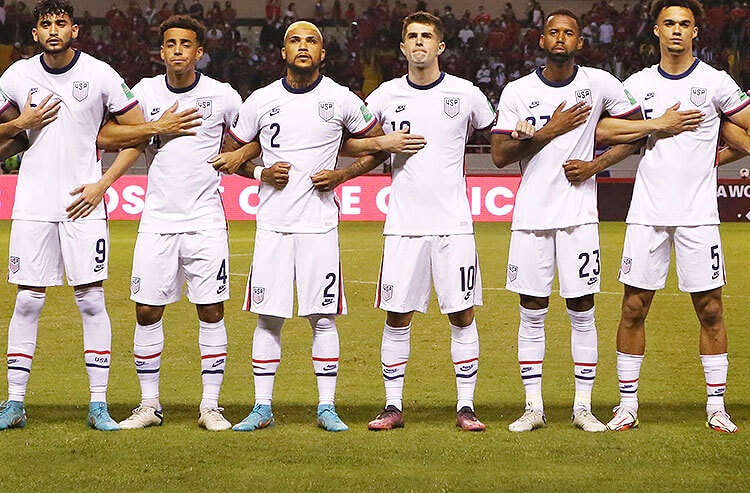 USA's 2022 World Cup Odds: Americans Not Favored to Advance Out of Group Stage
Provided by