Birmingham may be undefeated, but the books might be giving the Stallions too much credit. As we break down our best bets with our Week 5 USFL picks, see why Philadelphia has great value as an underdog on Sunday.

Week 5 in USFL action is here, and we’ve got the best bet lined up for each contest.

Arguably the top matchup of the weekend goes down Saturday between two 3-1 teams in the New Orleans Breakers and the New Jersey Generals.

The weekend is capped with a double-header on Sunday, as the undefeated Birmingham Stallions meet the Philadelphia Stars in the early game, and then Pittsburgh Maulers look for win number one on the season as they face Kevin Sumlin and the Houston Gamblers in the late game.

Check out our Week 5 USFL picks and predictions:

If you're signing up for a new sportsbook for the USFL, here are two of the best bonuses* available:

The Panthers fell to 1-3 with a close 26-25 loss to the Stars a week ago. They likely would’ve won if quarterback Shea Patterson was able to string anything together, but he finished with a miserable stat line of 9/17 for 67 yards and one touchdown, and three interceptions. They’ll hope to kick start a dormant offense against a beatable Bandits defense allowing 320 total yards per game.

I’m not going to hold my breath waiting for signs of life out of Jeff Fisher’s Panthers team. They had a chance to pick up a win a week ago against a pass-happy Stars team sans its starting quarterback, yet still couldn’t finish the job.

The Bandits (2-2) fell 16-10 to the Stallions a week ago, but we aren’t holding it against them. Birmingham is the league’s only undefeated team. The Bandits’ other loss on the season came in blowout fashion to the Breakers, who appear to be one of the USFL’s top teams. They’re one of the more difficult teams to power rank at this point.

What we do know is that the Bandits have a significant edge at the quarterback position — Jordan Ta’amu is a clear upgrade over Shea Patterson. While the Bandits are more of a mystery, the Panthers are a known commodity as one of the league’s worst teams.

The matchup of the week goes down Saturday between the Breakers (3-1) and Generals (3-1).

The Breakers picked up a 23-16 win a week ago to get back in the win column after suffering a 22-13 defeat to the Stallions in Week 3 — their only loss. They seem to be among the league’s upper crust.

We see the appeal with the Breakers, but believe betting markets are showing them a bit too much love at this time. This is a close matchup between two good teams.

The Generals have the No. 2 offense (358.3 YPG) and the No. 2 defense (239.7 YPG). Notably, they’ve controlled the trenches on both sides of the football. Their 178.3 yards per game on the ground offensively is second in the league (over 50 yards above the No. 3 team), while defensively they allow the fewest rushing yards (59 YPG) by a wide margin.

The Breakers have the No. 1 offense (383.8 YPG) and the No. 3 defense (150 YPG). The Breakers have a player atop all three major statistical categories: Kyle Sloter leads the league in passing with 1,071 yards, running back Jordan Ellis leads the league with 347 rushing yards, and tight end Sal Cannella’s 215 receiving yards are the most of any pass catcher. This team is evidently doing something right!

Both teams in this contest are averaging over 100 more yards per game than their opponents, a clear indication of quality. We think the Generals are being somewhat overlooked by this line and will be targeting the underdog. They’ve been the most dominant team in the trenches this season and their stats profile as the Breakers’ equal — not a notch below them, as the line would indicate.

The Stallions are the league’s only unbeaten team after four weeks. Remarkably, they’ve managed to accomplish this despite allowing more yards than they gain on a per-game basis. Birmingham ranks No. 3 offensively with 301.5 YPG, but checks in at No. 6 defensively, allowing 336.7 yards per game.

We’re not saying the Stallions are actually a bad team — far from it. This is a quality roster that has gone up against some of the better units in the league and managed to come away with the win every time. They also enjoy the benefit of playing in front of their home fans, since all regular-season games are played in Alabama.

The Stars rank second in the league with 209.5 passing yards per game. Coach Bart Andrus’ pass-happy system was without top quarterback Bryan Scott a week ago due to ankle and knee injuries, and his status remains up in the air for this contest. That’s a significant concern, but one that is lessened thanks to the play of backup quarterback Case Cookus.

A former standout at Northern Arizona University where he won the 2015 Jerry Rice Award as the FCS Freshman Player of the Year, Cookus looked good in his first taste of action in Week 4. Against a good Panthers defense, he completed 22 of 30 passes for 190 yards, two touchdowns, and one interception. The offense didn’t skip a beat under his watch and this passing attack seems to be in good hands whether Scott can go or not in Week 5.

The Stallions are the rightful favorite, but we think this is too many points. Every game the Stars have played has been decided by one score. Their dangerous passing attack should make them a threat to cover the spread even if they fall behind early. Philadelphia’s faulty defense (dead last in the league, allowing 374 YPG) has us shying away from picking the outright upset, but Andrus is a quality coach and is someone we want to back going forward.

Two of the league’s worst teams will battle in the last game of the weekend.

Kirby Wilson has come under fire for his mismanagement of the 0-4 Maulers. A longtime running back positional coach, Wilson stated repeatedly that his team’s identity would be centered around running the football. If the winless record wasn’t enough, it should be a concerning sign that the Maulers rank third-last in the league in rushing yards with only 101.5 YPG on the ground.

The team turned to Kyle Lauletta at quarterback in Week 4, but he completed only 15 of 32 passes while averaging 5.3 yards per attempt and failing to toss a touchdown. This team has struggled to get much of anything going offensively, but at least the defense is decent (No.4 with only 285.3 YPG allowed).

Kevin Sumlin’s Houston Gamblers rank second-last in both offense (253.3 YPG) and defense (373.3 YPG). Anytime you’re allowing over 120 more yards per game than you are gaining, alarms should be going off! If we had to rank USFL coaches, Sumlin would be near the bottom of the league (with Wilson). This team lacks a clear identity and doesn’t really do anything well. The game plan seems to revolve around crossing their fingers and hoping to win the turnover battle.

With two woeful offenses, we’re going to target the Under as our best bet for this final matchup of the weekend.

Use our USFL parlay calculator to create your own parlays and see their potential payouts. 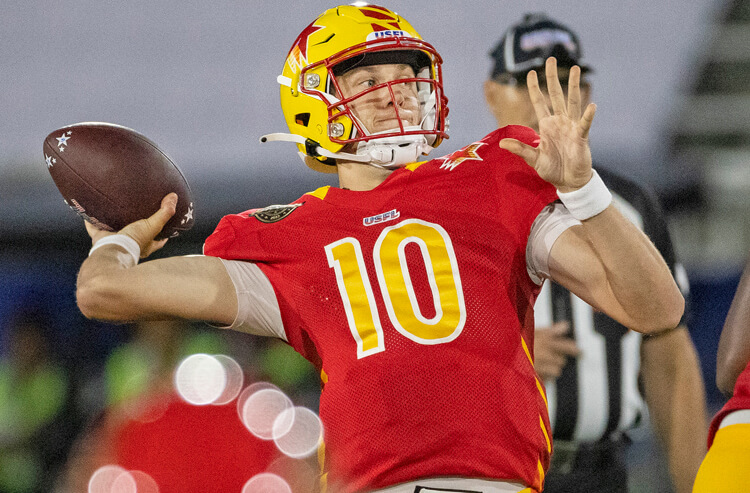 USFL Championship Odds: Undefeated Stallions Off to the Races
Kyle LaRusic | May 23, 2022

USFL Week 6 Odds, Picks, and Predictions: Generals are a Safe Gamble Against Houston
JD Yonke | May 19, 2022

Gamblers vs Breakers Week 4 Picks and Predictions: Going All In on Houston
JD Yonke | May 8, 2022

Generals vs Maulers Week 4 Picks and Predictions: New Jersey Beats Pittsburgh by Double-Digits
JD Yonke | May 4, 2022
About Us
Contact Us
Careers
Our Team
Brand
Testimonials