David Onama enters his UFC Fight Night bout with Nate Landwehr a -280 betting favorite but this entertaining battle should see both guys throw their fair share of violent shots. If nothing else, expect this exciting fight to make it to Round 2.

David Onama vs. Nate Landwehr is scheduled for three rounds in the featherweight division as the co-main event at tonight's edition of UFC Fight Night from the Pechanga Arena in San Diego. With both fighters having a propensity for violent, brutal battles, this one will be one to watch.

Onama has surged to a -280 favorite on the strength of his recent performances. UFC odds have the always entertaining Landwehr coming in as a moderate underdog at +235.

Onama has bounced back strongly after a competitive loss in his promotional debut to Mason Jones in 2021, scoring two finishes. Going into this fight, the Ugandan comes across as an aggressive striker that does a lot of damage and punishes his opponents standing and on the ground. There is a lot of excitement behind Onama and his finishing skills, and he has an opponent in front of him that may bring out his best qualities.

With advantages in height, reach, and age, Onama is the epitome of aggression landing 5.61 significant strikes per minute at 48% accuracy. He can keep the fight standing with a 50% takedown rate and has shown finishing power at any stage of the fight. All 10 of The Silent Assassin’s wins have come by some sort of finish, six coming by knockout and four submissions.

Landwehr is known as “The Train,” and he hits as hard as his nickname suggests. Tough as a two-dollar steak and just as technically refined, Landwehr is a guaranteed show-stealer thanks to his tendency to get rough and absorb punishment. In his last fight, Landwehr earned an impressive win over L’udovit Klien with a third-round anaconda choke last October.

Like Onama, Landwehr wastes no time with his opponents by landing 6.51 significant strikes per minute with a 52% accuracy. He has a 50% takedown success rate and an 87% defense rate while averaging .48 takedowns per fight. A strong wrestler with a high capacity for pain, Landwehr is a hard night’s work for anyone that crosses his path.

These two fighters swing for the fences and have glaring defensive deficiencies. They both throw a lot, get hit a lot, and finish their opponents usually within two rounds, and they both have clear paths to victory against the other. Onama might have the power advantage up top, but Landwehr can just as easily end the fight by exposing his vulnerabilities when getting taken down.

Landwehr vs Onama tale of the tape

This fight isn’t going the distance and could go either way, but we’re inclined to favor the more robust striking from Onama to carry the night. With how often these two get hit, Onama will get the better of the exchanges between them and Landwehr doesn’t counter efficiently enough to punish the Ugandan’s looping punches.

If Onama connects with a hard shot to get Landwehr off balance, he can charge in and put him in a terrible position to absorb his heaviest shots. Being that both men are capable of doing damage with their ground game, these two are going to keep it conventional until the fight starts to really heat up. Unless Landwehr gets Onama to the ground, he’s going to get tagged and rattled.

By no means is he a lock, but Onama is our pick to pull off a win in what could be the fight of the night.

While we can’t be 100% comfortable with Onama getting the win, we feel a lot better picking the fight to go Over 1.5 rounds.

Either Onama finally hits paydirt in a series of exchanges, or Landwehr endures a terrible amount of punishment to wear him down and take him to the canvas. Both scenarios are likely to happen, but not in one round.

We’re expecting this to be a close-quarters battle between fighters who will be throwing bombs from the opening bell, and it will be an upset in and of itself if both men make it to the scorecards.

Their chins and hearts should keep them up until at least the second round. Our best pick here is taking the Over at -160. 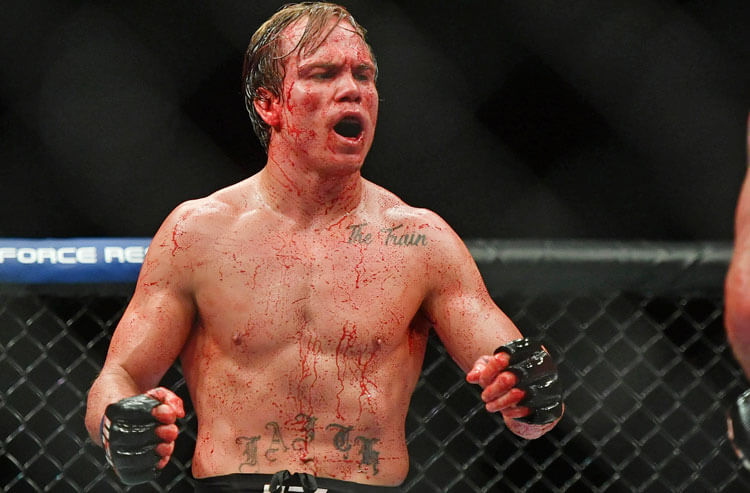