Carolina's Sam Darnold threw a touchdown pass and scored on a strange running play while the Panthers' defense dominated in a 23-10 victory against the visiting Denver Broncos on Sunday afternoon in Charlotte, N.C.

Darnold (11 for 19, 164 yards), who had been injured in the preseason and then behind Baker Mayfield and PJ Walker in the pecking order, made good on his first chance in a role that he held last year.

The Broncos (3-8) were limited to 246 yards of total offense in losing their third straight game. Russell Wilson completed 19 of 35 passes for 142 yards and a late touchdown.

Wilson was 6-1 against the Panthers while a member of the Seattle Seahawks.

The Panthers held the ball for more than six minutes on their first possession of the second half, driving 72 yards in 10 plays and scoring on Darnold's bizarre 1-yard keeper. He dropped the ball, recovered the fumble and rolled into the end zone.

Carolina scored on its first possession of the fourth quarter on Pineiro's 26-yard field goal.

The Panthers got the ball back on the ensuing kickoff when Jalen Virgil fumbled. That turned into Pineiro's 36-yard field goal after Carolina chewed up nearly another 4 1/2 minutes.

The Broncos finally scored a touchdown at the end of a 14-play, 77-yard drive on Wilson's 1-yard toss to Brandon Johnson with 3:19 left.

On an 11-play, 71-yard drive that lasted seven minutes, Darnold threw a 5-yard TD to DJ Moore with 30 seconds left in the first quarter for the game's first points.

Brandon McManus' 27-yard field goal for Denver and Pineiro's 42-yarder accounted for the scoring in the second. McManus missed a 56-yarder on the last play of the half.

The Baltimore Ravens will look to end their trend of late-game collapses Sunday when they host the reeling Denver Broncos.

Baltimore has led by more than one score in all four of its losses this season, including squandering a nine-point lead in the fourth quarter of a 28-27 loss against host Jacksonville last Sunday.

The Ravens (7-4) went just 2-for-5 in the red zone, as they settled for Justin Tucker field goals on their first three trips inside Jacksonville's 20-yard line.

"It's two things always: It's going to be execution and scheme, and it's scheme and execution," Ravens coach John Harbaugh said when asked about the Ravens' red-zone issues. "So, that has been a major focus for us as coaches to try to get the right plays up down there. At times, we've had the right plays and we haven't executed them."

Meanwhile, the Broncos (3-8) are a loss away from their sixth consecutive losing season. They are coming off a 23-10 setback to the host Carolina Panthers that was their third loss in a row and seventh in eight games.

"This is not where we wanted to be at this time in the season," Broncos coach Nathaniel Hackett said. "None of us thought it would be like that, and that responsibility is fully on me.

"We, as a group, have to come together and try to find a way to win a football game."

While the game appeared to be a marquee matchup between top quarterbacks at season's outset, Baltimore's Lamar Jackson and Denver's Russell Wilson haven't played as well as expected.

Jackson was limited at practice on Wednesday due to a quad injury, but he's expected to play on Sunday. He missed the final four games last year with an injured ankle. He has completed 62.1 percent of his passes for 2,231 yards -- an average of 202.8 per game -- with 17 touchdowns and seven interceptions. The 2019 MVP is also averaging 68.6 rushing yards a game.

Wilson has completed 58.9 percent of his passes and is averaging 236.9 yards this season, with just eight touchdown passes against five interceptions. After leading the Seahawks to the playoffs eight times in his 10 seasons in Seattle -- including two Super Bowls -- he was widely considered to be the key ingredient in the Broncos' return to NFL relevance when he arrived in the offseason and signed a monster contract.

The Ravens own the league's second-best rushing offense (162.7 ypg), which will look to exploit a Broncos' run defense that ranks 19th in stopping the run (121.6 ypg.)

Kenyan Drake, though, (85 carries, 392 yards, 3 TDs) has rushed for only 48 yards the past two games, including just 2 against the Jaguars.

However, none of them have been ruled out for Sunday. 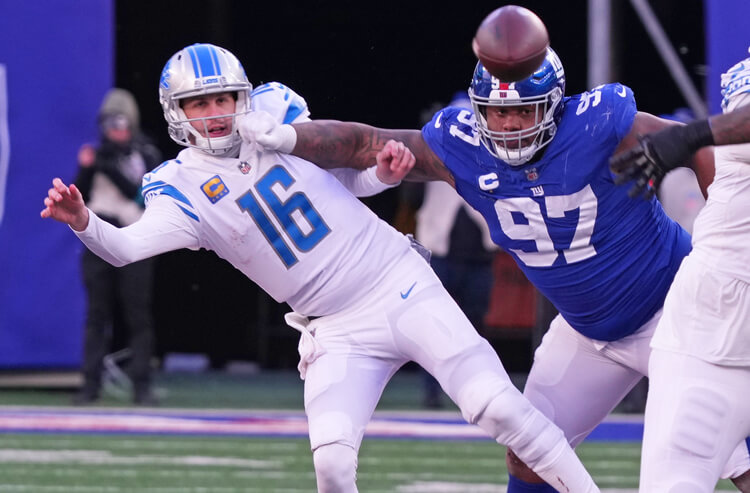 NFL Best Bets and Player Props for Week 13: Goff Does Damage to Jags
About Us
Contact Us
Careers
Our Team
Brand
Testimonials