England vs USA World Cup Picks and Predictions: Americans in Danger Opposite England

England opened up Group B play with a bang, trouncing Iran 6-2 earlier this week. Now, they face a United States squad that kicked things off with a disappointing draw vs. Wales. Will England fully assert their dominance over the group on Friday? 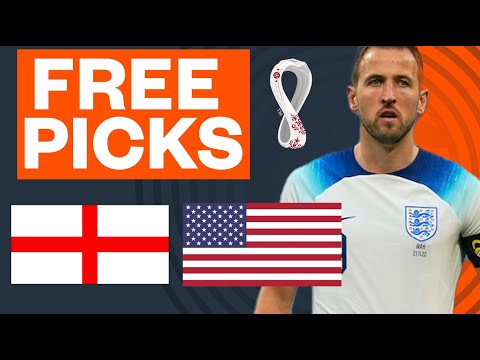 The winner of Group B could be decided when England faces the United States on Friday in 2022 World Cup group stage action.

The second match of the group will see England seeking a second win and guaranteed qualification into the Round of 16, with a strong grip on winning the group outright. Meanwhile, the United States will hope they can get a result and put themselves in a solid position to advance out of the group stage.

Both teams will likely see rotation, but will England’s depth be enough to see them past the Americans? Find out in our World Cup picks and predictions for Friday, November 25.

England vs USA picks and predictions

The Three Lions come into this match full of confidence after their terrific performance against Iran on Monday. They found the back of the net six times — and Harry Kane didn’t score a single one of them. Given their over-reliance on their talismanic striker in the past, this was a welcome sight to many England fans.

England led 3-0 at halftime, and could’ve had more were they properly awarded penalties on fouls to both Harry Maguire and John Stones on corner kicks. That said, they were ruthless before the break, scoring three goals despite having just a 0.80 expected goals in the first 45 minutes.

The switch by Gareth Southgate from a three CB setup to a 4-3-3 worked wonders and unlocked his young forwards' attacking potential, enabling them to push in attack rather than sitting back and countering. England dominated Iran 716-142 in completed passes, and put seven shots on goal. That said, it’s important to note that Iran’s starting keeper came off injured just 20 minutes in, and the backup was poor as he conceded the six goals on just 2.1 xG.

The United States will be annoyed that they weren’t able to take all three points against Wales, but they might also consider themselves fortunate to escape with a point. Despite dominating possession with two-thirds of the ball, they were able to manage just three shots on goal. Their lone goal came from a terrific ball by Christian Pulisic to set Timothy Weah free against Wales’ high line, which he finished past the onrushing keeper just 36 minutes into the match.

The entire match shifted at halftime, as Wales manager Robert Page brought on striker Kieffer Moore and the 6-foot-5 striker allowed them to get a foothold in the match. It led to Wales dominating the second half 1.38 to 0.13 in xG, and Gareth Bale’s penalty in the 85th minute proved to be the breakthrough. Were Wales to have shown better build-up play, they could’ve likely found a second, but they managed just 20 touches in the box.

England won’t have that issue. Their new setup enables their star players to get on the ball more often, and gives them more options in the middle than Wales did. While I doubt they’re going to have the offensive explosion they had against Iran, they still have multiple players who can score goals from multiple places. Their performance on Monday shows they don’t have to try to force the ball to Kane, unlike how Wales were trying to get the ball to Bale and Daniel James.

England don't need a result as badly as the United States do. As such, they’ll need to take fewer chances. With how the Americans are struggling to convert chances, I don’t know that the introduction of Reyna will be enough to overcome the likely conservative gameplan Berhalter will employ.

Therefore, England should get chances early and if they can get a lead.

I’m not sure how the Americans will be able to claw it back, especially if they’re without both Weston McKennie and Yunus Musah in midfield, who came off with injuries against Wales.

Kane will cause problems for the American back line, and whoever starts on the British left — be it Raheem Sterling, Jack Grealish, or Phil Foden — will undoubtedly target Serginho Dest or DeAndre Yedlin from the start. Take England to get a lead in the first half, and to never let it go.

A) Get a 76% profit boost on any 3+ leg World Cup same-game parlay today at DraftKings! Bet Now

B) Increase your World Cup bet builder winnings by 25% for England vs USA at bet365! Bet Now

England vs USA side analysis

England won their first match in the group 6-2, with goals from five different players. The three points earned gave them a clear advantage and first place in the group. They’ve scored nine goals in their last two matches, and Southgate’s shift in tactics makes them much more dangerous going forward. That’s a key reason why England’s price in the three-way line is quite juicy with most books having them in the -180 to -200 range.

The United States drew 1-1 with Wales, and have just one point heading into this match. They will likely be seeing some sort of result, with hopes of stealing a point and setting themselves up to take three points against Iran. The Americans have not won any of their last four matches, and have scored just two goals in that span.

England’s win ended a six-match winless run, but they’ve never beaten the United States in two World Cup matchups. They have, however, won three of the last four meetings overall, including friendlies.

England have been involved in some high-scoring affairs during the latter half of 2022. Three of their last four matches have seen four or more goals scored, with the winning team having scored at least three in those outings. Seven of their last 11 matches have gone Over 2.5 goals, as have 12 of their last 19.

It’s been the opposite for the United States. Just six of their last 26 matches, both friendly and competitive, have seen three or more goals scored. There have been a total of six goals scored over their last four matches, and they’ve been held scoreless in two of them. They’ve also struggled to generate shots on goal, with just five total over their last three matches.

The Over has hit in three of the five meetings between these two nations. Their two World Cup showdowns both saw two or fewer goals scored.

England vs USA World Cup Picks and Predictions: Americans in Danger Opposite England
Provided by