World Cup favorites Brazil begin their tournament on Thursday with a tough opponent in Serbia. The underdogs won't shy away from attacking and our World Cup picks highlight what that could mean for a Brazil midfielder.

The early days of the 2022 World Cup have already seen surprises, no more so than in Argentina's opener against Saudi Arabia. With plenty still to learn in the tournament's infancy and Brazil a sizable favorite, we're ducking the sides in our World Cup picks here.

Check out my best bet for Brazil vs. Serbia and more ahead of this afternoon's kickoff below.

Brazil vs Serbia picks and predictions

Both Brazil and Serbia are fairly well-known quantities as they get set to begin their World Cup. The pillars of both squads have been involved for years and they have well-established tactical approaches. We'll use that familiarity to pick out great value in a fun market and back Casemiro to be booked.

The Brazilian midfielder hardly needs an introduction but further context bolsters this pick. As the best defensive midfielder on the planet, Casemiro is tasked with breaking up attacks, whether that's on or off the ball. No matter what's needed as a destroyer, Casemiro brings it. He's in the 94th percentile in tackles, 84th in interceptions, 99th in blocks, and 97th in clearances among midfielders in Europe.

With elite play in defensive midfield comes risky positions in which the best, and only, route out is to foul — and Casemiro doesn't shy away. Few midfielders are carded more frequently than Casemiro, who was booked the third-most (12) in La Liga in 2019-20, and the fourth-most in 20-21 and 21-22 (11), while picking up the second-most yellow cards (3) in Madrid's triumphant Champions League campaign.

Playing in a double-pivot for the national team doesn't change Casemiro's uncompromising play either, with the tenacious midfielder picking up two cards in four games in Russia 2018 and three in nine qualifiers for '22.

While the security Casemiro provides Brazil enables them to commit numbers forward and unlock the brilliance they have, it also leaves him especially compromised against direct-attacking opposition. In Serbia, he'll be seeing just that.

Playing with three centerbacks and wingbacks, Serbia are afforded great stability at the back but they launch counters in a rapid fashion, with the wide players bombing forward and central attackers making vertical runs. The catalysts for those attacks, however, is where Casemiro will get into trouble.

Dusan Tadic and Sergej Milinkovic-Savic will be tasked with getting on the ball centrally and driving forward in attack, with Casemiro left to break up Serbia's numerical advantage and foul. Tadic, in particular, is adept at getting in a good position and drawing a whistle, with just over 2.0 fouls drawn per 90 minutes in qualifying.

Casemiro is, just by nature of his position and play, always at risk of getting booked. In this specific matchup, however, with Tadic and Milikovic-Savic in his firing line and so crucial to Serbia's attack, he's all the more likely to find his name in the official's book.

My best bet: Casemiro to be booked (+270 at PointsBet)

A) Brazil to score in both halves, Jose Vinicius Junior anytime goal, and both teams to score BOOSTED to +750 at bet365! Bet Now

B) Neymar and Richarlison each have 2+ shots on target BOOSTED to +400 at Betway! Bet Now

Brazil vs Serbia side analysis

With Brazil a -200 favorite on the moneyline, I won't be backing them despite a strong belief they'll win.

This is as complete of a team Brazil have had during the Neymar era, with their fullbacks the lone concern. Their attacking talent speaks for itself but they've also found a front four that can effectively connect midfield and the forwards, through Neymar and Lucas Paqueta, as well as finish attacking moves.

In Casemiro and Fred, they have a tremendously stable central midfield, with more progressive options like Bruno Guimaraes to look to off the bench.

Brazil's strength will face a good test, though, because Serbia is by no means an easy opponent. They condemned Portugal to the qualification playoff by topping their group, leaning on world-class forwards in Aleksander Mitrovic and Dusan Vlahovic to prioritize defensive stability and trust their forwards to finish what opportunities were created.

Though Mitrovic's uncertain fitness makes me hesitant to believe Serbia can get anything out of this game, they're an incredibly tough opponent and not one I'd trust Brazil to cover an alternate line against.

If we were assured of Mitrovic's fitness in this match, I'd be inclined to follow the public and take the Over. The pair of Vlahovic and Mitrovic is an absolute nightmare for defenders, with the former complementing the relentless aggression and physicality Mitro brings. Against a relatively meh Brazil backline, I'd have backed them to score but without seeing Mitrovic test his injured foot, it's hard to do so.

Without trusting Serbia to score but having a fair bit of faith in their ability to limit Brazil's high-danger chances, I am avoiding the Over/Under market completely. 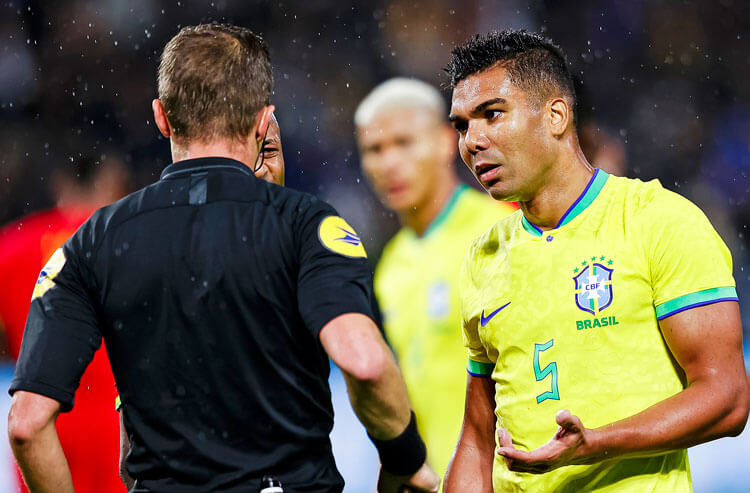