The United States is bringing plenty of inexperienced players to this international friendly as the team tries to find its identity. We preview the best bets in our USA vs Serbia picks.

The United States men’s national team will play in a friendly against Serbia on Wednesday night in the team's first action since the 2022 World Cup. While not featuring any of the USMNT’s European-based players, this will be a good opportunity for many familiar faces to get some experience against a solid foe.

Unlike the United States, Serbia failed to reach the knockout stage of the World Cup. The nation earned just one point in the competition, but manager Dragon Stojkovic was kept in charge. He'll be without the vast majority of his squad while looking to see what his young group of players are capable of in this clash.

Can the favored Americans once again win on home soil and overcome some of the drama surrounding the squad over the past two months? Or will Serbia become the first side in nearly four years to defeat the Yanks in the United States?

We dive into those questions and more in our USA vs Serbia soccer free picks and predictions for Wednesday, January 25.

USA vs Serbia picks and predictions

The United States remains without a manager as it begins the unfamiliar journey toward World Cup 2026. With no qualification cycle to prepare for right now, the next three-and-a-half years will be filled with lots of friendlies. Players will be anxious and eager to show they deserve to be on the final roster.

Interim manager Anthony Hudson will be at the helm on Wednesday after Gregg Berhalter’s contract ran out at the turn of the calendar and the spot hasn’t yet been filled. Hudson has indicated he wants to find depth at certain positions. That's why he picked a very inexperienced squad.

While there are some familiar names with the likes of Walker Zimmerman, Aaron Long, and Kellyn Acosta, the manager also selected youngsters like Jonathan Gomez, Paxten Aaronson, and Jalen Neal, whom many fans will look forward to seeing. That also means plenty of on-the-job training and the lack of chemistry that comes with it.

The outlook won’t be any different on the other bench. Serbia will be without its biggest stars and many of the team's experienced players. The likes of Dusan Vlahovic and Aleksandar Mitrovic will be busy this week, and all but three players for Serbia will be debutants for the national team. Many have played together at the under levels for the country. But this is a big step up for a group whose combined caps total in the single digits.

One area where they will boast a bit of experience is in goal. Djordje Petrovic is one of the better keepers in MLS, and he was named the team MVP for the New England Revolution this past season. As such, he'll be familiar with many of the attackers from the U.S., and that could give him a bit of an advantage. The same goes for forward Dejan Joveljic, who was involved in 15 goals this past season for the LA Galaxy.

One area of concern for the United States over the past six months has been the team's inability to score. That was a problem during friendlies leading up to the World Cup, and it was an issue again throughout the tournament. The Americans managed just a goal in three of the four matches while failing to score against England.

Jesus Ferreira and Paul Arriola are likely to be called upon to lead the line, and I don't trust either as reliable scorers. There are also real questions about the midfield, as there's little familiarity throughout the unit.

Serbia is likely to set up in its 3-5-2 formation, which will clog up the middle of the pitch. The U.S. may struggle in the midfield at times, but the squad's backline has logged a fair amount of experience and should be able to handle much of Serbia’s attacking threat.

Given the amount of inexperience in play and the typical nature of these types of friendlies with lots of substitutions, scoring will likely be at a premium. Take the Under in this one, and stay away from trying to pick a result.

Looking to do some International Friendly betting? Here are two of the best bonuses* available:

USA vs Serbia side analysis

These two nations have played just once before, with the previous meeting six years ago ending in a scoreless draw. Serbia lost twice at the World Cup, drawing with Cameroon in a 3-3 shootout and falling to Switzerland and Brazil. The team did win four of its six Nations League outings, but those victories came with their dynamic duo in attack.

Meanwhile, the USMNT won just one of its four World Cup outings. A 1-0 win over Iran pushed the Americans through after draws with Wales and England. But then the Dutch outclassed the U.S. 3-1. The Americans also can't be judged heavily on previous play due to the turnover in players following those outings.

The Yanks will most likely counter Serbia’s 3-5-2 setup with a 4-3-3 formation, although a new manager could use something unique. The Americans are heavily favored at home, despite the squad featuring 13 players who have never been included on the senior team.

A draw is a very possible scenario, and that presents decent value at +300. I’d particularly keep an eye on the first-half draw at +120.

The Under is the best bet for this outing. The Serbian side is trending toward the Over, but that was with two outstanding strikers in Vlahovic and Mitrovic leading the way. In total, 13 goals were scored over the team's three World Cup matches.

The exact opposite has been the case for the United States. The loss to the Netherlands was the first time in four competitive matches that the Over hit during a U.S. match. Two goals or fewer have been scored during 10 of the USMNT's last 14 such outings.

The public is leaning slightly toward the Under. A scoreless first half could be quite profitable as well. A 0-0 halftime result would pay out nearly twice the wager, and that's strongly worth considering.

USA: None
Serbia: None

Temperatures in the mid-50s will greet players and fans as the match kicks off on Wednesday, with a drop into the upper 40s toward the end of proceedings. There's a zero percent chance of rain in the forecast, and winds will be minimal. 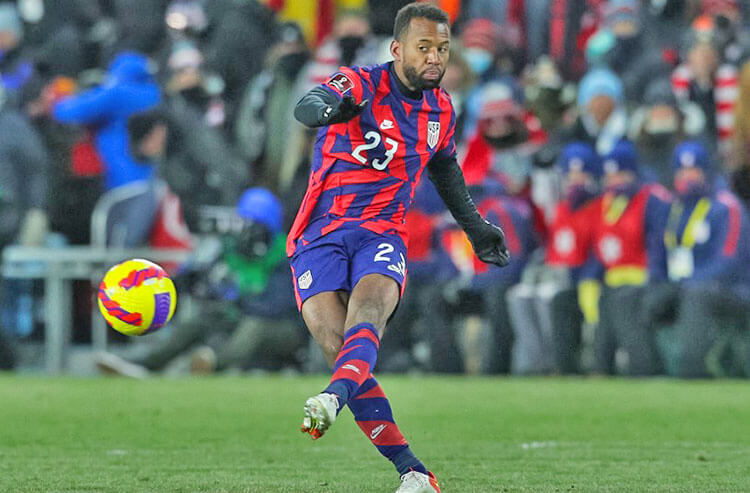 Juventus vs Lazio Picks and Predictions: Lazio Is Live at a Price
Jason Ence | Feb 2, 2023