Champions League Futures Odds: Powerhouses Collide in Round of 16

The draw for the knockout stages of the UCL delivered, with Real Madrid vs. Liverpool and Bayern Munich vs. PSG to come in the New Year. Other teams got a little luckier, and that's reflected in the odds to win the Champions League, below.

The international break for the winter World Cup is going to throw a wrench in seasons all around the world but it will be perhaps no more aggrivating than as it relates to the Champions League, which now faces a long three-month break.

When it returns, however, it will return in glorious fashion as a fantastic Round of 16 is set. There are compelling matchups up and down the bracket but two stand out in particular: A rematch of last year's final between Real Madrid and Liverpool, as well as rematch of the '20 final between Bayern Munich and PSG.

The knockout stage draw had a ripple effect throughout the Champions League odds board — check out the latest update below.

Live odds courtesy of DraftKings Sportsbook. Be sure to compare Champions League odds before placing your bets.

Favorites to win the Champions League

While a quartet of European powerhouses drew one another, Man City's status as the favorite was helped by a friendly draw in the Round of 16. After an undefeated group stage, City drew RB Leipzig, who sit outside the Top 4 in a wide-open Bundesliga.

Leipzig did end the group stage in an impressive manner, winning each of their last four games, but that form will not count for anything when this competition resumes in mid-February.

Bayern didn't flinch in the Group of Death, with the German giants navigating Group C — alongside Barcelona, Inter Milan, and Viktoria Plzen — with six wins in six. There's no time to relax for Bayern, however, as they drew PSG to start the knockout stages.

It speaks to the credit Jurgen Klopp and this Liverpool team have earned over the last few years that, despite a poor domestic season and a Round of 16 date with Real Madrid, they moved into the Top 3 as PSG slid down.

Klopp's teams have been tremendous in tournament play and the 90-plus-day break is no more needed than Merseyside but as it stands, it's hard to put much faith in this squad.

The Champions League will resume on February 14, with home-and-away legs contested between 16 teams. The Round of 16 draw was as follows:

To get ahead of the pack there are a few trends that may help you when choosing your Champions League winner:

These odds are constantly adjusted throughout the summer as players get hurt, suspended or transfer. Once the season begins, title odds will change as teams win and lose games and as more players get hurt or are suspended. Sportsbooks will also adjust the Champions League odds based on handle and liability to certain teams.

This means that on a $100 bet, you'll stand to win $250 if Bayern wins the Champions League. If it's close to the end of the tournament you might see that a team is has a minus sign (-) ahead of its odds.

This means that you would need to bet $120 to win $100 on a Barcelona championship.

Above we have posted the American odds for the Champions League. However, these are easy to convert to decimal odds or fractional odds with our odds converter tool.

Real Madrid have won a record 15 Champions League titles, including six over the past 10 seasons. 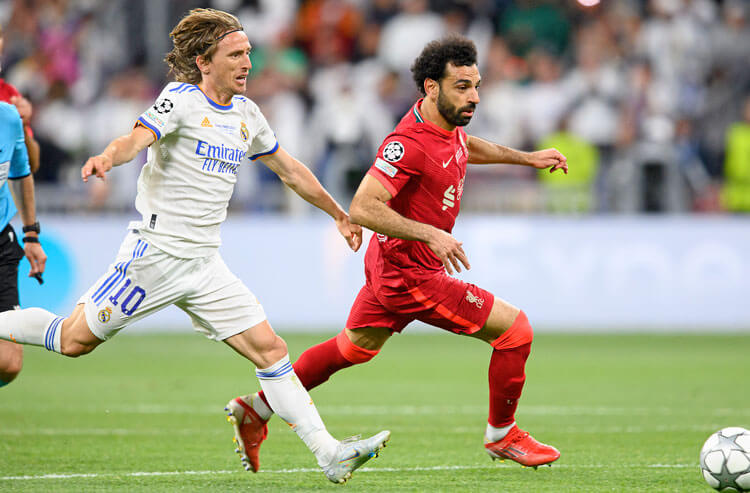 Champions League Futures Odds: Powerhouses Collide in Round of 16
Provided by