Preseason tours of the USA are winding down as the domestic season looms, and two of Europe's biggest clubs will close their American schedule at the Rose Bowl. Check out our soccer betting picks as Juventus and Real Madrid meet on Saturday.

Southern California is used to bright lights and big stars, which is exactly what the Rose Bowl will feature Saturday night when Real Madrid and Juventus square off. The reigning Spanish and European champions are coming off a 2-2 draw with Mexican side Club America, while the Old Lady secured a 2-2 draw of their own in a midweek friendly against Barcelona.

With a draw and loss so far in their United States tour, Real Madrid will be looking to head back to Europe with a win ahead of their UEFA Supercup match in 10 days.

Here are our Real Madrid and Juventus picks and predictions for Saturday, July 30.

If you're signing up for a new sportsbook for some soccer betting, here are two of the best bonuses* available:

You couldn’t ask for better weather than what the fans and players will enjoy on Saturday evening. Temperatures will be in the mid-70s, with a low breeze. There is a very slight chance of rain but it’s unlikely to impact the match.

The reigning Champions League winners have gotten off to a slower than expected start this preseason, with a 1-0 defeat to rivals Barcelona preceding their 2-2 draw with Club America.

There has been heavy rotation in the squad by manager Carlo Ancelotti, and often the first-choice midfield and first-choice back line have been playing apart from each other. That is not expected to be the case on Saturday, with the Italian gaffer planning to run out his starting XI, including a return of fullback Daniel Carvajal.

Real Madrid’s back line will hope to perform better than it did against Club America, where they conceded just five minutes in as there was a miscommunication between the defense and midfield allowing a gap through the middle that was readily exploited by the Liga MX side. They conceded a penalty later in the match, too.

Juventus kept a clean sheet in their first preseason match with Chivas, but Barcelona went end-to-end with the Italian side in a 2-2 draw. Ousmane Dembele carved their back line apart either side of halftime with a pair of brilliant individual goals, but striker Moise Kean canceled them out scoring either side of the break as well.

Kean’s finishing allowed them to take a result from the match, despite being outshot 16-6 by Barcelona. It also means they have some depth at the forward role, with the continued absence of Federico Chiesa. In addition, star striker Dusan Vlahovic has yet to feature in this preseason, so we have yet to see what their attack will look like once everyone is back to fitness.

Ancelotti has already stated he will likely give key players more rest than usual ahead of their UEFA Super Cup match with Frankfurt in about 10 days. As such, I don’t expect them to even play the entirety of the first half.

Unlike their opponents, the Old Lady has another friendly after this match, and will probably run their starters out for longer. In addition, both Vlahovic and midfielder Weston McKennie will see their first action of the preseason and will want to impress after missing the last two matches due to injury.

I don’t expect Madrid to win, given how heavy their rotation has been this preseason and how long their reserves will be playing in this one. Their attack will be hurt with the removal of Benzema, and it may become nonexistent if their main attacking line all comes off prior to halftime.

As such, I like Juventus to get a result and probably a win. Protect against the draw and take the Old Lady to win with a share of the spoils returning your bet.

Juventus’ match with Barcelona was an up-and-down affair, and their back line looked susceptible throughout the match. This sets them up for trouble against a Madrid side with players like Vinicius Junior and Rodrygo, who can run at them with pace, much like Dembele did midweek.

Real Madrid have tinkered a lot with their lineup this preseason, making entire squad changes at once, so their defense has not been the most cohesive. This might be the first time we see the majority of the first team playing together — but as Ancelotti pointed out, they likely won’t do so for long.

Given that fact, I like Juventus to have an easier time finding the back of the net, leading to yet another high-scoring match.

Despite the juice, take the Over on this one.

The attacking line of Vinicius Junior, Karim Benzema, and Rodrygo will likely be in partnership together for Madrid for the first time this preseason, and that bodes well against a Juventus side that was ripped apart repeatedly by Barcelona in the final third.

While they may only play for the first half, they’re one of the best attacking trios in club football, and the relationship between Benzema and Vinicius Junior last season produced the highest goal-assist combination in Europe.

Barcelona jumped on Juventus early in their match, and even before they scored the opening goal, they were threatening the Old Lady’s goal multiple times. I expect Real Madrid to do the same on Saturday.

Benzema is arguably the best striker in the world right now, and as he showed against Club America, he can score from nearly anywhere if you give him the slightest opening.

The odds are strong that Juventus will struggle with Real Madrid’s direct attack and concede the opening goal in this contest, which is why I’ve made it my best bet for the match. 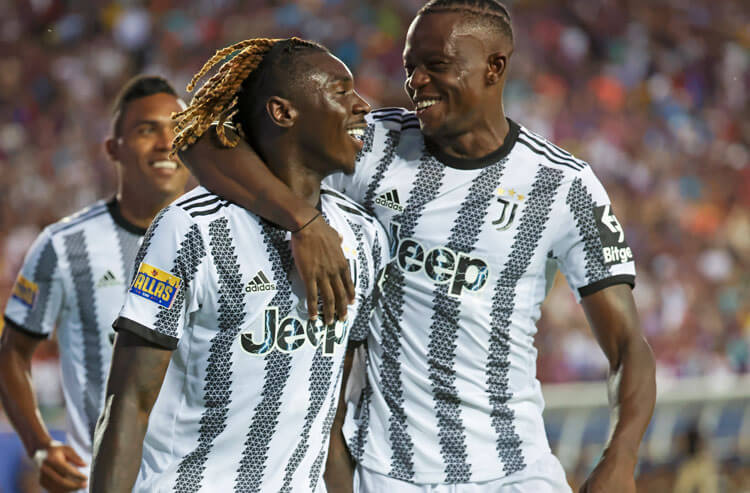