Real Madrid crushed the field last season, winning the title as La Liga odds favorites wire-to-wire. With the page turned to 2022-23, Real are set to face more resistance from Barca. Check out the full odds to win La Liga below.

Now, La Liga odds are on the board for the 2022-23 season, with Real Madrid set to face more resistance from the other Spanish power, among others.

Favorite to win the La Liga

Real Madrid were crowned champions of Spain with four games to spare last season, taking advantage of Barca's uncompetitiveness to waltz to the title. While Kylian Mbappe won't be joining, Madrid doesn't lack talent both experienced and young.

Their hated rival, Barca, should offer a stronger test in the upcoming season but Madrid are rightful favorites.

Between a presidential election, the fallout of Lionel Messi's departure, a managerial change, and a financial crisis, it has been a lost period for Barcelona. However, Xavi has seemingly brought stability and hope to the Catalan club, with the second half of 2021-22 showing reason for optimism.

In Xavi's first full season in charge, Barca should be expected to challenge Madrid — especially if they succeed in landing Robert Lewandowski.

Atletico failed to defend their La Liga crown last season, finishing third and 15 points back of champions Real. Under Diego Simeone's watch, Atletico always has the potential to punch above their weight but they are a firm third here behind the giants of Real and Barca.

La Liga futures odds are constantly adjusted throughout the offseason due to player transfers and injuries. Once the season begins, title odds will change as teams win and lose games and as more players get hurt or suspended. Sportsbooks will also adjust La Liga odds based on handle and liability to certain teams.

La Liga futures odds will usually look like this:

This means that on a $100 bet, you'll stand to win $350 if Barcelona wins the La Liga title. If it's close to the end of the competition, or a club has been particularly dominant, you might see them with a minus sign (-) ahead of their odds.

This means that you would need to bet $500 to win just $100 on a Real Madrid championship.

Above we have posted the American odds for La Liga. However, these are easy to convert to decimal odds or fractional odds with our odds converter tool.

Nine different teams have been crowned La Liga champs since its inception in 1929. 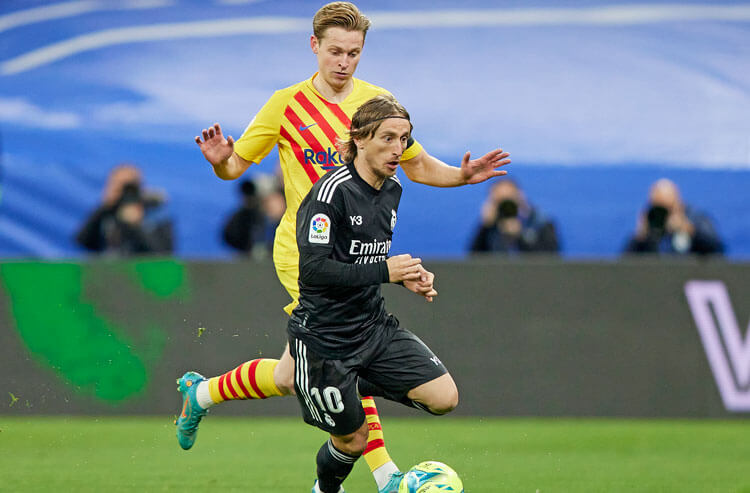