Man City are the EPL title odds favorite but stumbled into the World Cup break with a loss to Brentford — while Arsenal remain on the charge. How does the rest of the league shape up? Get the full 2022-23 EPL odds below.

Despite the new Premier League season still feeling quite young, we're already at the break to accommodate the World Cup in Qatar.

Some of the league's storylines have become clear — City's dominance, Arsenal's increasingly hard-to-deny title challenge — while others remain confounding, such as exactly what Liverpool or Chelsea are.

With the league on hold until after Christmas, let's take a look at Premier League odds, as Arsenal remain just above City in the table.

Live odds courtesy of DraftKings Sportsbook. Be sure to compare EPL odds before placing your bets.

Favorite to win the Premier League

Despite remaining behind Arsenal throughout the season, and dropping points with more regularity, Man City have remained the title favorite throughout. That remains the case after the final weekend before the World Cup break, as City lost to Brentford but held onto their status as title favorites.

Despite nobody expecting this title challenge to sustain, Arsenal remain top of the league and will be there at Christmas. That they are continuing their strong form while Gabriel Jesus goes through a bit of a drought is incredibly impressive and speaks to the team Mikel Arteta has built.

As Liverpool continue to try and salvage their season, they took care of business before the winter break with a win over Southampton. The break comes at a great time for an injured and lost squad but a large chunk of the squad will now jet off to Qatar with their countries.

As it stands, Liverpool are sixth in the league, seven points back of the Top 4.

EPL futures odds are constantly adjusted throughout the offseason due to player transfers and injuries. Once the season begins, title odds will change as teams win and lose games and as more players get hurt or suspended. Sportsbooks will also adjust EPL odds based on handle and liability to certain teams.

This means that on a $100 bet, you'll stand to win $350 if Manchester City wins the EPL Championship. If it's close to the end of the competition, or a club has been particularly dominant, you might see them with a minus sign (-) ahead of their odds.

This means that you would need to bet $500 to win just $100 on a Liverpool championship.

Above we have posted the American odds for EPL. However, these are easy to convert to decimal odds or fractional odds with our odds converter tool.

Manchester City defended their title, edging out Liverpool by one point.

Under its current construction, Manchester United have won nearly three times more than the next closest team, at 13. Expanding it to include the previous structure, Man United still hold the most first division titles at 20.

Since its new formation in 1992, the Premier League has seen seven different winners. 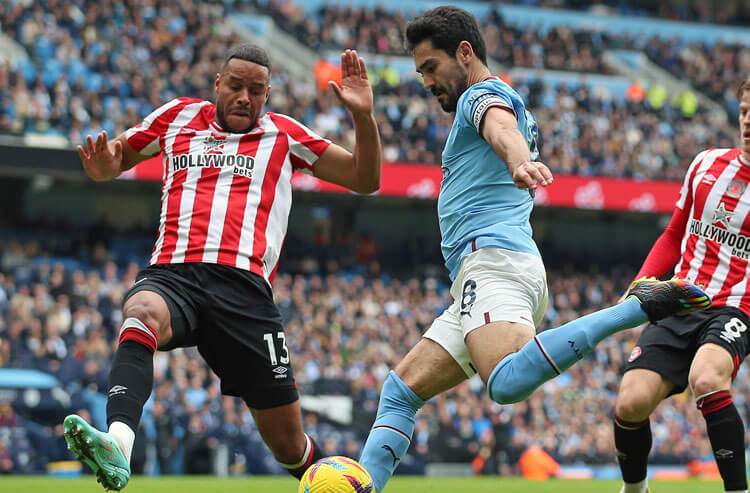 Wolves vs Arsenal Picks and Predictions: Players to Take It Easy Ahead of Qatar
Sam Farley | Nov 10, 2022

Manchester City vs Chelsea Picks and Predictions: Fatigue Makes Cowards of Us All
Davide Salvoni | Nov 8, 2022