Liverpool lifted their first trophy of the season against Chelsea at Wembley in February and can get halfway to an unprecedented quadruple Saturday in the FA Cup final. Find out if they can do just that with our soccer betting picks.

Saturday sees one of the most historic games in soccer as the FA Cup final takes place from the famous Wembley Stadium, with Chelsea vs. Liverpool, two of the biggest clubs in England who have won a combined 15 FA Cups, meeting to decide this year’s winner.

Can Liverpool win their second trophy of the season or will Chelsea manage to add a piece of silverware to take something from this difficult season? Don’t miss our Chelsea vs. Liverpool picks and predictions to find out.

There’ll be sunshine and temperatures in excess of 70 degrees when this game kicks off on Saturday.

The Premier League title may be in Man City’s hands but Liverpool can, for now at least, still win an unprecedented quadruple, having won the Carabao Cup in February and reaching the Champions League final.

For Chelsea, it would mean a huge amount having undergone a difficult season as geopolitics forced Roman Abramovich into selling the West London club. Given that many were worried for the club’s future just months ago, it would be a huge boost to finish the season with a trophy.

Chelsea lost their past two FA Cup finals, including last year to Leicester, but they won it as recently as 2018. For Liverpool, it’s been a far longer wait, last reaching the final a decade ago, only to be beaten by, you guessed it, Chelsea. They last won this famous trophy in 2006 in a penalty shootout over West Ham.

Liverpool are strong favorites and expected to win this game. Given the season that they’ve had, that’s a fair assumption and they are by anyone’s standards one of the planet’s top two clubs alongside Man City. I’m not sure the victory will be quite as easy as those +105 odds imply though.

The two clubs last met at the end of February in the Carabao Cup final, also at Wembley, and I think there’s a very strong chance that we see this game develop along similar lines. That day, the game finished 0-0 before Liverpool won an incredible penalty shootout which saw both goalkeepers taking shots.

Jurgen Klopp comes into this missing only Fabinho but the loss of the Brazilian is a big one for the balance of his team. The midfield three of Thiago, Jordan Henderson, and Naby Keita don’t work quite as well as when they have Fabinho screening for the back four. Beyond that, it’ll be the standard 4-3-3 Liverpool lineup with Joel Matip alongside Virgil van Dijk at the back. As usual the fullbacks, Trent Alexander-Arnold and Andy Robertson, will be doing a lot of the attacking work and patrolling the flanks, looking to get in behind Chelsea’s wingbacks.

We’ve reached the point that January signing Luis Diaz is a lock to start in any big games and I’d be shocked if he didn’t start in the front three with Mohamed Salah and Sadio Mane. The speed, guile, and movement of that front three is, as always, Liverpool’s greatest weapon and they’ll cause Chelsea headaches.

Thomas Tuchel has had a disappointing campaign in many ways but one thing we know about the German coach is that he’s at his best in the big games and this is another opportunity for him to showcase his tactical brilliance. Chelsea will set up in their favored 3-4-2-1 and we should see Romelu Lukaku playing up front, having been in good form recently. Ruben Loftus-Cheek will start alongside Jorginho given the injuries to Mateo Kovacic and N’Golo Kane. A lot of Chelsea’s attacking play will run through Mason Mount, who has quietly had a brilliant season, scoring 14 goals and getting 16 assists for club and country.

We’ve seen throughout Tuchel’s time at Chelsea that in big games he favors a cautious approach and I’d expect to see him focus on keeping out Liverpool and then hitting them on the counter. Those are the tactics that he used during February’s Carabao Cup meeting and I’d expect them to be used again. That game finished 0-0 and I think a draw, albeit potentially a 1-1, feels like the most likely result here.

We know that Liverpool have been goalscoring machines, with 61.1% of their Premier League games finishing with Over 2.5 goals.

As brilliant as Liverpool are, it’ll be Chelsea who decide whether this game finishes Over or Under 2.5, and given Tuchel’s consistency in setting out teams to be strong defensively in big games, it makes sense that we’ll see something similar to when these teams last met. For that reason, we’ll be backing Under 2.5 goals.

I’m expecting this game to go the distance before heading into extra time. Ordinarily, when teams reach extra time, they focus on not conceding and just making it to the shootout when it becomes a 50-50. In this game, much like their last meeting, I’m expecting this to reach penalties.

Last time, we got to witness an epic shootout with Liverpool winning 11-10 after Chelsea ‘keeper Kepa Arrizabalaga, who was subbed on, missed the deciding goal kick. It’s unlikely Chelsea will make that mistake again and you’d expect Edouard Mendy to remain in goal but this Liverpool team have received specialist penalty coaching to deal with the pressure and I believe that those differentials can work. For that reason, I’m backing Liverpool to win via a penalty shootout at +1,000. 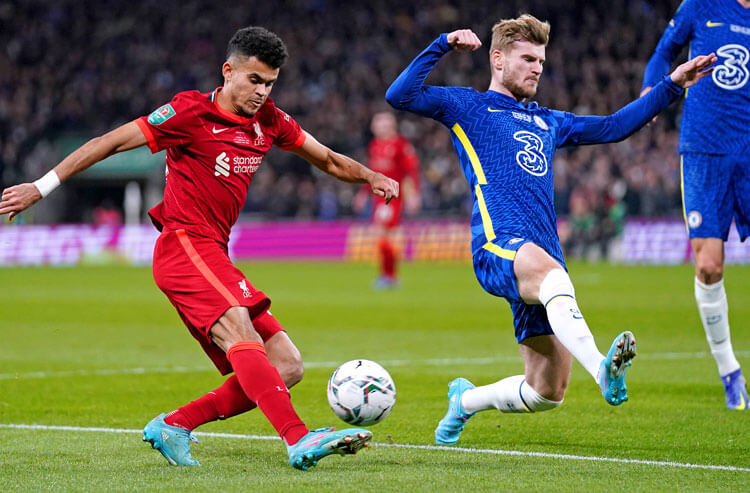 Portland Timbers vs Philadelphia Union Picks and Predictions: Philly Look to Get Back on Track
Jason Ence | May 21, 2022

Chelsea vs Leicester City Picks and Predictions: All Signs Point Towards the Over
Sam Farley | May 17, 2022
About Us
Contact Us
Careers
Our Team
Brand
Testimonials