Team Canada now knows who it will face in the group stage of the Qatar World Cup — and we've got Canada's 2022 World Cup odds for not only advancing out of Group F... but also for winning the entire tournament.

It was the qualification that captured a nation, as the entire country rallied behind its men's soccer team that not only survived CONCACAF World Cup qualifying but also finished at the top of the group.

With Canada's World Cup odds rapidly rising throughout this process, next up was to find out who it would play in soccer's most prestigious tournament.

Well, that has now been answered, as the 2022 World Cup Draw is finished, and Canada sits alongside Belgium, Morocco, and Croatia in Group F.

How does this draw impact Canada's odds to be crowned the best in the world? Let's dive in to further examine Canada's odds for the 2022 World Cup in Qatar.

Belgium is currently ranked No. 2 in the world, coming off a third-place finish in 2018 and still boasting world-class players in Kevin de Bruyne, Romelu Lukaku, and Eden Hazard — although the pressure is on the Belgians in what seems like the final run for an aging core.

Also going into Qatar 2022 with an aging roster is Croatia, which is currently 16th in the FIFA World Rankings and was runner-up to France in the 2018 World Cup. Of all the career national team goals for the most recent Croatian roster, seen nearly 70% of them have come from Ivan Perisic, Andrej Kramaric, and Luka Modric — aged 33, 30, and 36.

The final guaranteed opponent for Canada will be 24th-ranked Morocco, which has lost just one match in the past two years (to Egypt) but has not faced any opponents currently ranked higher than 56th (Burkina Faso). Led by some Sevilla FC players (Youssef En-Nesyri, Munir El Haddadi, Bono), plus PSG rightback Achraf Hakimi, the Atlas Lions have some good young talent but remain a desirable Pot 3 opponent for Canada.

Despite the exciting run to the World Cup, Canada is still the group's Pot 4 (lowest World Ranking) team, so it has the longest odds to win the group at +1,600.

While Canada's odds to win simply advance to the knockout round (aka finish Top 2 in the group) is a much more manageable +275, its odds to win the entire tournament are significantly longer at +25,000 — albeit that is shorter odds than most Pot 4 teams, sitting on par with the likes of Japan, Morocco, and South Korea.

Alphonso Davies may be the biggest name on the Team Canada roster, while Cyle Larin may be the highest-scoring Canadian man of all time, but if Canada is to march deep enough in the World Cup to have a player challenge for the Golden Boot, oddsmakers tab Jonathan David as the most likely player to do so.

The 22-year-old forward currently plays in France's Ligue 1 for Lille, where he has 13 goals in 29 matches this season, and he has 20 career goals in 27 career matches for the Canadian national team.

With the odds suggesting Canada will finish last in Group F, it makes sense that the Golden Boot odds board only features one Canadian — but David's current price of +10,000 is comparable to American star Christian Pulisic (who plays for Chelsea), South Korea's Heung-min Son (Tottenham), and Angel di Maria of Argentina (PSG).

Canada will open its World Cup action against Belgium on November 23, followed by games against Croatia, then Morocco. If Canada is fortunate enough to advance to the knockout round, it will face counterparts from Group E (Spain, Germany, Japan, winner of Costa Rica/Australia).

Betting on the FIFA World Cup is an extremely popular futures betting option and outright odds usually come out soon after the previous World Cup winner is crowned.

These odds will adjust based on how countries and players perform leading up to the World Cup. Sportsbooks will also adjust the soccer odds based on handle and liability with certain nations.

Futures odds are displayed in list form, showing each option and its odds — most often ranked from best chances to win to worst. You will usually see a plus (+) sign in front of a team's futures odds, like this:

This means that on a $100 bet, you would stand to win $25,000 if Canada won the World Cup. As we get closer to the World Cup final or if one team has been extremely dominant, you might see a country with a minus sign (-) ahead of its odds.

Above we have posted the American odds for the FIFA World Cup. However, these are easy to convert to decimal odds or fractional odds with our odds converter tool.

Canada will face Belgium, Croatia, and Morocco in Group F of the 2022 World Cup. 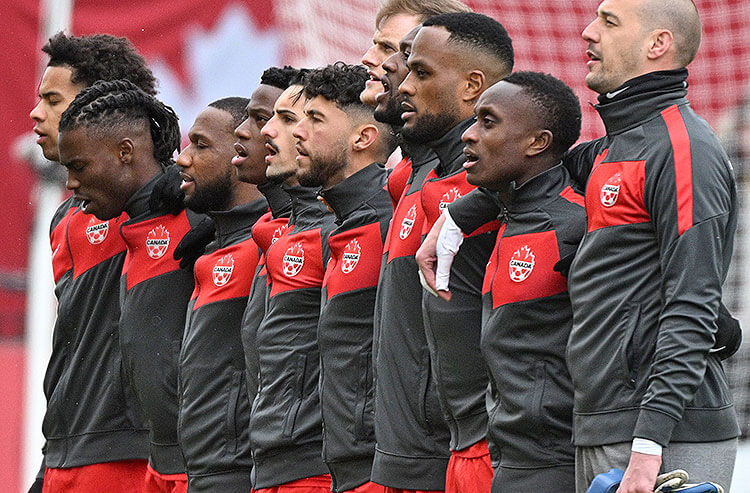