Barcelona vs Rayo Vallecano Picks and Predictions: Shocker at the Camp Nou?

On paper, Barcelona look primed for a La Liga title charge, but also on paper, their financials are a mess. That may not just hinder their title chances but their La Liga meeting with Rayo Vallecano on Saturday — our soccer betting picks explain.

The La Liga campaign opens this weekend, and Barcelona will look to rebound from a disappointing season as they host Rayo Vallecano on Saturday afternoon. The Catalan powerhouse finished a distant second last campaign, 13 points adrift of rivals Real Madrid, while Rayo were able to survive in their first season back in Spain’s top flight.

There are questions regarding the registration of Barcelona’s new acquisitions as they race against the clock to raise funds to appease the league and meet financial requirements. Whether they are able to or not, the match offers some solid betting value.

Let’s look at how things should play out in our Barcelona vs. Rayo Vallecano picks and predictions for Saturday, August 13.

Compare La Liga odds before betting to ensure you get the best number.

If you're signing up for a new sportsbook for some La Liga betting, here are two of the best bonuses* available:

The weather in Barcelona ahead of kickoff will be warm with some thunderstorms expected, but those should abate once the action gets underway. Temperatures will be in the mid-80s and humid, but the wind should not be much of a factor.

Barcelona’s summer has been more entertaining than any show or movie could hope to be. Despite being mired in more than $1.3 billion worth of debt and having financial restrictions placed on them by La Liga, the club has gone on a spending spree this transfer window that is preposterous even by Football Manager standards.

Unfortunately for the club, despite selling off massive chunks of future revenue over the next 25 years, the league has stated their accounting is suspect, and they’ve yet to fall in line with the fair play rules set forth by La Liga.

Furthermore, as of Friday morning, they had yet to register any of their new signings. To make things even more confusing, Barcelona have plans to sign even more players — mainly Chelsea defender Marcos Alonso and Manchester City midfielder Bernardo Silva.

Lost in all the side-show drama leading up to this match is that they actually have an opponent on Saturday. Rayo Vallecano finished mid-table last season in their first season after promotion, but the tight table meant they finished just four points clear of the drop zone.

They’ve brought in five new players to strengthen their side, including midfielder Unai Lopez and goalkeeper Diego Lopez.

Radamel Falcao and Sergi Guardiola lead the line in attack, combining to score 14 goals last season. However, both are aging, with Falcao 36 years old and his pace long gone.

The side thrives on possession and limiting the opportunities their opponents have, which allows for their forwards to limit their runs and be in good positions when chances arise. Unfortunately, those chances are often few and far between, as only six clubs scored fewer than their 49 goals in league play last season.

As of the time of this writing, it looks highly unlikely that any of Barcelona’s seven players will be eligible come Saturday’s match, leaving them with just 17 registered players. While president Joan Laporta is confident they will be able to register the players ahead of Saturday’s match, after activating the fourth “economic lever” on Thursday night, it’s a race against time — one that we, unfortunately, have no way of knowing how it will turn out as we try to preview the match.

Because of that, I have to evaluate the match based on the sides that are available. While Camp Nou can be imposing, Rayo weren’t intimidated at all last season, as a 1-0 win there in April saw them complete a shocking double over the Catalan giants.

With their solid preseason form — including a 1-1 draw at Old Trafford against Manchester United — and Barcelona’s very thin roster with limited attacking options, I like Rayo to walk away with another result.

Bet the double chance — but only if Barcelona are unable to register Lewandowski, Dembele, or Raphinha in time.

As mentioned earlier, Rayo struggles to score goals, but they did a decent job last season preventing them.

Their 50 goals conceded saw them finish smack-dab in the middle of the league, but in two matches against Barcelona, they kept a pair of clean sheets. Additions have helped solidify that defense, as they’ve conceded one goal or fewer in four of their six preseason friendlies.

With their full allotment of players this preseason — where registration issues were not a concern —Barcelona scored more than two goals just twice in six friendlies. Those instances came against a woefully overmatched Inter Miami side and a Club Universidad Nacional side who has just one win in their last 11 matches in all competitions.

Again, with their missing weapons at the top of the pitch, I don’t see Barcelona scoring three or more times in this one. Take the team total Under — but as before, with the caveat that their big guns are not registered in time.

Even if Barcelona has their new signings registered in time, I actually do like one particular play in this match.

As stated earlier, Rayo pulled the double over Barcelona last season, with a pair of 1-0 wins playing a key role in their survival in the top flight.

Barcelona had a very strong side fielded in both matches, and their defeat to Rayo in April saw them hit the woodwork twice and outshoot the visitors 18-3. While Barcelona were unable to convert any of their five shots on goal, Rayo needed just one — and made the most of it.

In their last five meetings dating back to 2018, Barcelona have beaten Rayo by multiple goals just once, a 2-1 win in March of 2019. Now, Barcelona will try to change that trend — without their best attackers — and attempt to defeat a team by more than two goals, a feat they failed to achieve in any of their final 10 matches of last season. I just don’t see it happening.

Take Rayo getting two goals. Anything less than a multi-goal win for Barcelona sees you paid out, with the protection of a push if they win by two. 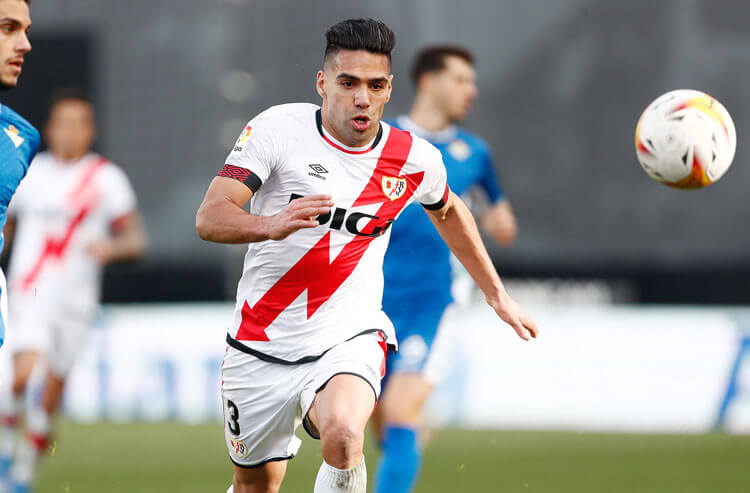 Barcelona vs Rayo Vallecano Picks and Predictions: Shocker at the Camp Nou?
Provided by