With the stakes only getting bigger with the playoffs here, our lineup of head-to-head and top finisher best bets for the FedEx St. Jude Championship are fading a couple of household names — including Jordan Spieth — and backing the youngsters instead.

The FedEx Cup Playoffs are here and Tom Kim is the story heading into the St. Jude Championship odds at TPC Southwind in Memphis.

Kim went low on Sunday to trounce Sungjae Im and John Huh by five shots at last week's Wyndham Championship. Is he one to watch in the first round of the playoffs?

We’ll take a hard look at betting Kim and some of the other young stars over the usual elite suspects for head-to-head matchups and top finisher bets this week.

TPC Southwind is a Par 70 that plays 7,243 yards. There are only two Par 5s and there are 10 Par 4s in the 400-480 yards range. It’s tight off the tee with water hazards lurking on half the holes or more. It actually holds the record for most water balls.

The greens are on the smaller side with undulation. Southwind is amongst the Top 15 most difficult courses on Tour since 2015 due in part to narrow fairways as well as all those hazards.

Adam Scott stinks right now. He’s 80th in recent fairways gained and we all know he’s a bad putter but try 118th in putting over the last 12 rounds and 119th around the greens.

Reavie can’t putt either but at least he ranks third in recent fairway finding and is also generating a lot more scoring opportunities than Scott. Believe it or not, the short-knocking Reavie even outranks Scott in scoring on long Par 4s.

Burns was in a playoff to nearly win this thing last time and he’s also the lower floor guy in this matchup who wins more often. Burns’ approach play has been better than Speith’s this season and he also has been more steady with the flat stick.

We’ve seen Jordan work his usual magic around the greens but we’ve also seen him miss a ton of big short putts. He ranks 94th in putting over the last 36 rounds, compared to Sam who ranks fourth.

We think of Lowry as a short-game scrambling man but he just lost 7.4 strokes rolling the rock and 2.7 chipping and putting it at the Wyndham. He barely contended at The Open and missed the cut at the U.S. Open. He keeps putting up those good approach numbers but missed fairways and putts are hurting him.

Sungjae is 10th in recent fairway finding and just gained in every key stat across the board two weeks in a row. His brilliance was easy to miss with how Tom Kim played on Sunday at Wyndham but we loved how Sungjae recovered from a bad start with a hole-out eagle to get right back in the mix. You need that kind of resilience with all the trouble at Southwind.

Pendrith is a very good recent bogey avoider who is also Top 10 off the tee and Top 20 in both DK points and approach play recently. He gained 3.5 shots on approach last week and 6.1 when he couldn’t stop the Finau Express at Rocket Mortgage.

He’s also gained 2.1 or more shots off the tee in six consecutive starts and has had some flashes of good putting. He’s a bomber, but he’s a bomber that hits a lot of fairways and can scramble. Plus, he’s Top 10 in recent scoring on Par 4s in that key 450-yard range.

FanDuel is where you can still get the big number on Poston. He’s still hot since winning the John Deere a week after he finished second at the Travelers. He’s since grabbed an 11th at 3M and 21st last week.

He’s gaining every week on and around the greens and has had some dialed-in approach-play weeks recently while rarely losing off the tee. We also like that he ranks highly in avoiding double bogeys and scrambling. That means he can recover from water balls better than most.

The heavy favorite — Cameron Smith — is going to be answering a lot of questions at TPC Southwind. Has he been staying sharp for three weeks since winning The Open?

Davis is in good form to improve on a 60th place finish here last year. He avoids a lot more bogeys and he’s striking it better now having gained off the tee in seven of his last 10 starts. He’s also right off a 14th-place finish at Rocket Mortgage where he gained 4.1 strokes around the greens and 3.9 on approach. 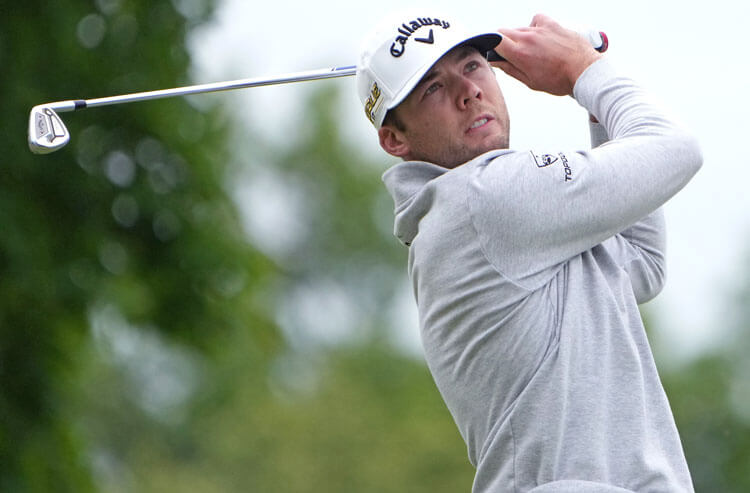