There has been nobody better offensively for the Lightning in the last three playoff runs than Nikita Kucherov. But will he be able to deliver once more in his home barn? Find out in our Game 6 player prop picks for Nikita Kucherov. 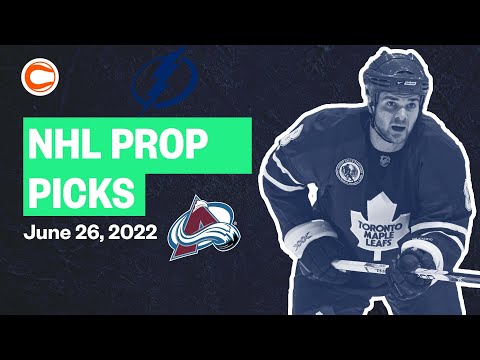 It looked as though the Stanley Cup betting favorites, the Colorado Avalanche, would race away from the Tampa Bay Lightning in the Stanley Cup Final, but the two-time defending champs kicked it into another gear, and have now forced a Game 6 at Amalie Arena on Sunday night.

A key role in the Game 5 win was played by 2018-19 Hart Trophy winner Nikita Kucherov, who notched his first goal of the series on a Tampa Bay power play. Despite the Lightning back at home for Game 6, they'll need a repeat performance from Kucherov to push the Stanley Cup Final to a decisive Game 7.

Let’s take a look at the litany of available Nikita Kucherov props concerning Kucherov and make our top three selections.

Be sure to also check out Josh Inglis' full Game 6 betting preview ahead of tonight's matchup.

If you're signing up for a new sportsbook for the Stanley Cup Final, here are two of the best bonuses* available:

Though Kucherov did score in Game 5, he has not been finding the twine with the regularity hockey fans and bettors have come to expect over the last few years. Prop bettors should look to fade him in this market on Sunday.

Kucherov’s Game 5 goal — which came on the man advantage — was his first tally of the entire series. It was also just his fourth point. Unbelievably, that power-play marker was Kucherov’s first goal in a seven-game span — one of the many reasons he no longer is a Conn Smythe betting favorite.

Some bettors might say that Kuchy is due to go on a heater now that he’s busted out of his slump, but this handicapper is not so sure he has truly turned a corner. Prop bettors should remain skeptical and back the Under in the goals department.

When it comes to the power play, prop bettors should not expect the Lightning to strike twice in Game 6.

Tampa Bay has been stifled by the Avalanche on the man advantage, cashing in on just two of its first 18 chances in the SCF. This cold spell extends back into the Eastern Conference Final, where the Bolts failed to score on each of their last six power play opportunities against the Rangers.

Though Colorado was just 18th in the regular season in penalty killing (82.2%), it has stepped up its game noticeably in the postseason. In addition to smothering the Lightning in this series, it held Connor McDavid and a very dangerous Oilers power-play unit to a 2-for-11 conversion rate (18.2%) in the Western Conference Final.

Even if Tampa manages to notch another goal on the power play, there’s no guarantee that Kucherov will have a hand in it.

Not only has Kucherov not tallied a lot of goals of late, but he isn’t even getting his shots on goal against Darcy Kuemper and the Avalanche defense.

He is currently 12th on his team in shooting accuracy in these playoffs at 52.4% and has eclipsed three shots on goal in just two of his last seven games overall.

His struggles in the shot department are part of a larger problem for the Lightning as a whole, who have managed a modest 28 shots per game as a team in the SCF. Tampa was just 17th in the regular season in shots per game at 30.9.

Kucherov was not a “volume shooter” in the regular season, firing only 3.3 shots per game at opposing netminders. The numbers don’t support a play on the Over here.

Use our NHL parlay calculator to create your own parlays and see their potential payouts.

Blue Jays vs Mariners Picks and Predictions: Manoah Gets Toronto Back On Track
Shawn Wronka | Jul 9, 2022