Betting on the national anthem is a fun bet for your Super Bowl Sunday. Get the history of the anthem length, an analysis of the props available, and more!

Super Bowl national anthem betting is one of the first Super Bowl prop bets to cash in on Super Sunday, with oddsmakers setting an Over/Under on the time required to sing "The Star-Spangled Banner."

Popular artists like Pink and Demi Lovato as well as music legends like Gladys Knight have been some of the recent Super Bowl anthem singers, with the chosen performer announced about two weeks prior to the game. Last year, country star Mickey Guyton sang the national anthem in 112 seconds, hitting the Over for bettors at Super Bowl 56.

Who's singing at Super Bowl 57

The singer or singers for the Super Bowl LVII national anthem will be announced in the weeks leading up to the game.

Once a performer is confirmed, sportsbooks release what they think the total time of the performance of the national anthem will be and assign odds to the Over and the Under. The closing total last year was set at around 103.5 seconds, and the Over carried the day by about eight seconds.

Being that there is no official timer, some sportsbooks will grade this prop on slightly different times. This has, in the past, resulted in the same bet being graded as Over at some betting sites and Under at others. Be sure you understand the terms and conditions of this prop at your betting site before placing a bet.

On top of the popular Over/Under length of the national anthem odds, sportsbooks release other markets based on the anthem performance and the broadcast. Some of last year's markets for Mickey Guyton included:

When it comes to Super Bowl national anthem betting, there are two ways to gain an advantage. You pore over old YouTube videos, trying to figure out the speed at which it'll be sung. Or, as it happened last year, you simply wait until the rehearsal time gets leaked.

After Sullivan and Church were announced as the performers, sportsbooks posted an Over/Under time for the length it would take for them to sing it. That number bounced around between 1:57 and 2:01 before bettors went crazy on the Over after a tweet from a reporter tipped off the betting world.

Alright gamblers. Here is the timer on the practice of the National Anthem. 2:16 #SuperBowl #GoBucs #ChiefsKingdom pic.twitter.com/CpJC4gHUPp

It turns out the rehearsal video was spot on with the actual performance landing at about 2:16 and with Eric Church singing first.

Did sportsbooks pay out?

Immediately following last year's leak, the only question on the mind of bettors was if the sportsbooks would honor those wagers.

We can't speak for all betting sites, but from our experience in 2021 and in speaking with other bettors, it appeared most, including Sports Interaction, honored and paid out bets the Over.

Betting on the Super Bowl national anthem is one of the many novelty prop markets available for the annual NFL championship that isn’t connected to the outcome of the actual game. The singing of "The Star-Spangled Banner" takes place before the coin toss and has become one of the most popular Super Bowl prop bets at online sportsbooks.

Super Bowl national anthem prop bets have grown in popularity over the past decade, especially because this market doesn’t directly involve the game and has a fun crossover into pop culture that appeals to even the most casual viewer.

The most popular market is betting the Over/Under on the length of time it takes to complete the anthem, but there will also be markets about what the singer(s) will be wearing and if they will make a mistake during their rendition.

How to bet on the Super Bowl national anthem

Along with other Super Bowl odds, it's important to learn how to bet on Super Bowl prop markets. Betting on the Super Bowl national anthem all depends on the performer named to sing "The Star-Spangled Banner." From there, oddsmakers can have a lot of fun creating some unique and entertaining national anthem props.

The most common way to bet on the Super Bowl national anthem is the length of the national anthem. Oddsmakers will set an Over/Under total in time (minutes and seconds) and bettors can pick whether the anthem will go Over or Under the set time total.

Most anthem singers have performed "The Star-Spangled Banner" at previous events and games, and many of those renditions are available to watch online with platforms like YouTube. Once the Over/Under time total is set, you will find plenty of Super Bowl bettors flocking to those clips to help handicap the singer’s style and the average time needed to belt out the anthem.

Besides betting on the length of "The Star-Spangled Banner," there are other Super Bowl national anthem props available:

These other props are not nearly as popular, however, and won’t be offered at all betting sites.

The national anthem length odds usually come out two weeks prior to the Super Bowl, shortly after the performer of "The Star-Spangled Banner" is announced.

The Over/Under time and attached vig/juice will vary from book to book, so if you have multiple sportsbook options you can shop around for the best total price to fit your prediction. Like most Over/Under bets, books will display the total and the Over and Under will have vig/juice attached to each side.

However, as more money was bet on the Over heading into Super Sunday, bookmakers adjusted the vig on the national anthem odds to Over 116 seconds (-140) and Under 116 seconds (+110). Oddsmakers did this to draw more money to the Under. That adjustment meant that for every $10 you wanted to win betting the Over you would need to bet $14. And for every $10 risked on the Under you could win $11 ($100 wins $110).

Popstar Demi Lovato performed the national anthem at Super Bowl LIV and took 1 minute and 49 seconds to complete it (109 seconds), so those that bet on the Under won their prop wager.

Can you legally bet on the national anthem?

Land-based operators within the U.S., like sportsbooks located in Las Vegas, are not allowed to offer props on the singing of the Star-Spangled Banner because there’s no official timing provided and all grading would be subjective to the bookmaker.

Gaming control boards and regulatory commissions are hesitant to offer betting markets on events that can’t be defined in the box score of the Super Bowl, as they are vulnerable to conflicts in results and decisions.

However, some states have softened their stance on these novelty prop markets in recent years. New Jersey sportsbooks are allowed to offer betting on the color of the Gatorade bath and Super Bowl MVP odds have been available in Nevada since 2016.

The explosion in online sports betting in the late 1990s got the ball rolling on novelty Super Bowl props. While casinos in Las Vegas couldn’t offer action on the length of the national anthem (restricted by state gaming control board rules), online bookies could and jumped at the opportunity to take wagers on this fun pop culture-powered prop.

Going back to Super Bowl XXXIV in 2000, the average length of the national anthem is 115.4 seconds (one minute and 55 seconds) over the past 31 Big Game renditions. Only 11 of those anthems went longer than two minutes, however, five of those have come in the past 10 Super Bowls.

The longest amount of time needed to sing the Star-Spangled Banner in that span was two minutes and 35 seconds by Alicia Keys at Super Bowl XLVII in 2009 while the quickest anthem time of the past 21 years was 1 minute and 30 seconds by Billy Joel at Super Bowl XLI in 2007.

In terms of betting the national anthem, the most memorable — and controversial — singing of the Star-Spangled Banner was by pop star Christina Aguilera at Super Bowl XLV in 2011.

Not only did Aguilera mess up the words to the national anthem but she added a “Woo” at the end of the song, which had different sportsbooks grading the length at various times: some including the “Woo” and others not. Anthem bettors that lost their prop bet based on those decisions were unhappy and many online books made the call to pay out bets on both the Over and Under to avoid further outrage and bad press.

As the Super Bowl nears, it’s time to queue up your patriotic playlist and put your pop culture predictions to the test by betting on the length of the Super Bowl national anthem:

The novelty of these Super Bowl prop bets shows no signs or wearing off. Armed with historical background, a stopwatch and of course, a trusty listing of online sportsbooks, you are ready to line up your first Big Game bet.

Yes, you can bet on the national anthem if legal sportsbooks in your region are allowed to offer those props.

The average length of the Super Bowl national anthem over the past 21 years is 115.5 seconds (1 minute and 55.5 seconds). 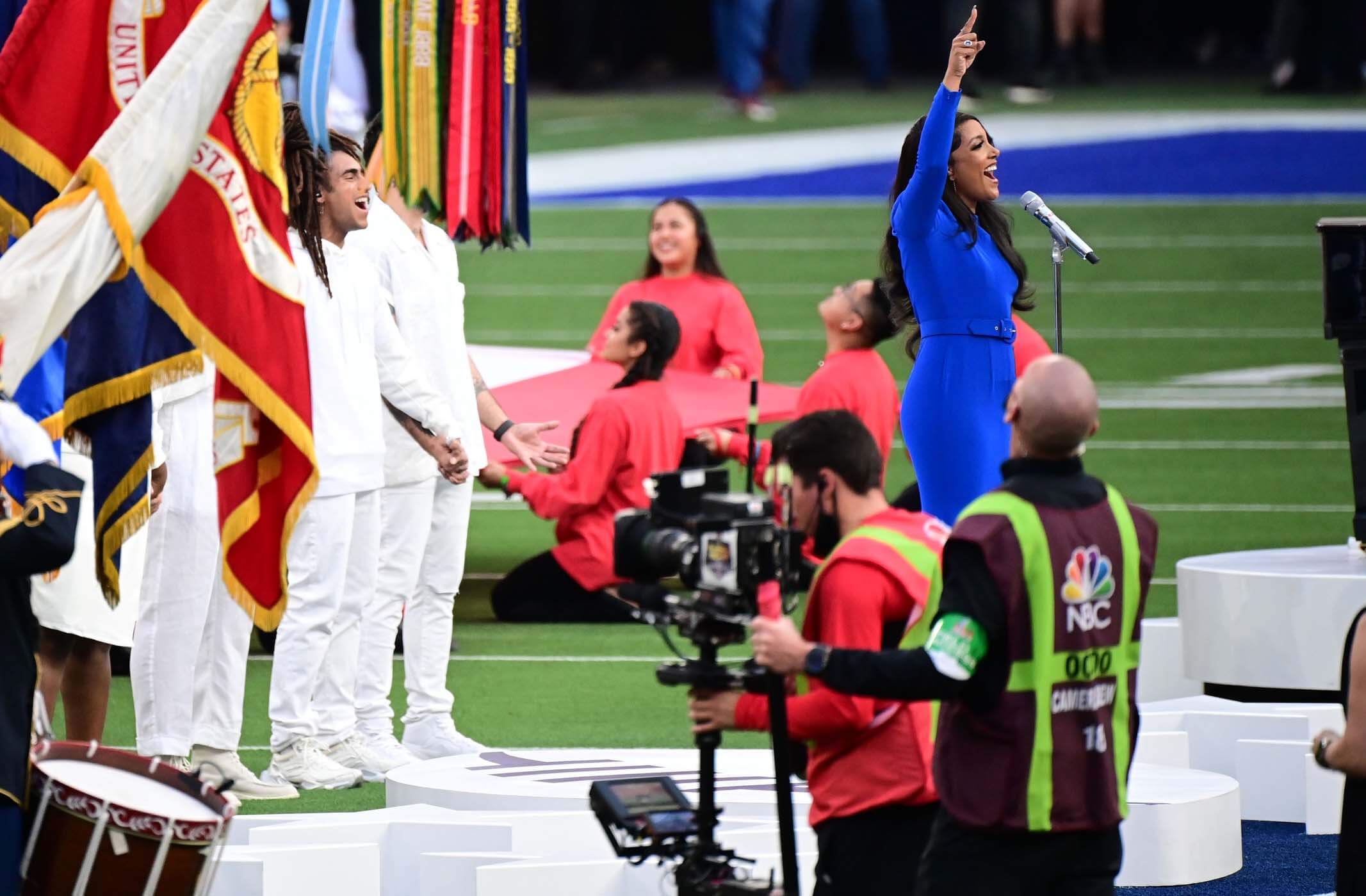