Super Bowl 2023 Predictions & Picks: Eagles and Chiefs Set to Meet in the Desert

Super Bowl Sunday is just around the corner. Get expert picks and predictions for Super Bowl 57 between the Philadelphia Eagles and Kansas City Chiefs. 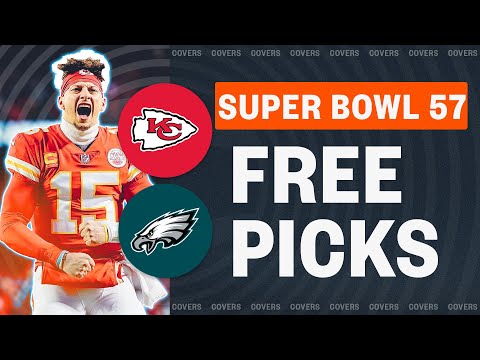 With just over a week until the Super Bowl, when the Philadelphia Eagles and Kansas City Chiefs will do battle, Super Bowl odds are front and center in the betting world.

Heck, even after the game starts, there are plenty of Super Bowl props and Super Bowl player props markets, derivative lines, and novelty props worth monitoring.

Thankfully, I've collected all of the best Super Bowl picks for this year's game. Join me as I take a deep dive into our best bets below.

For just the second time in their NFL careers, Patrick Mahomes. and Jalen Hurts will square off — but this time with football's ultimate prize on the line.

Odds opened up on both sides of the pick'em fence, with some pinning Kansas City as the favorite and others siding with Philly. However, the market consensus as of Thursday afternoon is Eagles -1.5, with a potential for it to keep creeping towards a field goal.

While this is Hurts' first Super Bowl in his young career, the Chiefs will appear in the Big Game for the third time in four years. Philly got here with relative ease, outscoring the Giants and 49ers by a 69-14 combined score. The Chiefs' path was far from simple and included several key injuries — including the Mahomes' ankle saga — but nonetheless, they made it.

I'm not expecting plenty of fireworks at Super Bowl LVII. Sure, Kansas City and Philadelphia have a surplus of weapons on offense, but they also have two very stellar stop units, headlined by two nasty pass rushes. The Big Game has pumped out the Unders in recent years, with each of the last four games staying below the total, and I expect that trend to continue in 2023.

See more of my insights in my Super Bowl 57 Bet Now/Bet Later column.

The market got a little upside-down in the first 48 hours after the official SB LVII line was posted, as the Chiefs rapidly went from as high as 1.5-point chalk... to a 2-point underdog. This, however, seems like an overreaction to the Chiefs squeaking out a win and the Eagles cruising to victory (except KC battled a tough Bengals team and Philly had a free pass vs. a truly QB-less Niners side), as well as injury concerns to Kansas City (where they have two weeks to heal).

Not only is the market going to trend back towards KC, but getting Mahomes & Co. as underdogs on the right side of the key number of one is too good to pass up.

See more of my analysis in my Eagles vs. Chiefs picks and predictions article.

The Kansas City Chiefs exercised their demons from a season ago, defeating the Cincinnati Bengals in a 23-20 barn burner to advance. Meanwhile, the Philadelphia Eagles clobbered the San Francisco 49ers in the NFC title game to advance to Super Bowl LVII in Glendale.

With Conference Championship action wrapped up and the Super Bowl matchup set, the best is yet to come.

Odds courtesy of DraftKings Sportsbook as of February 4, 2023.

Jalen Hurts (+120): Hurts averages nearly eight designed runs per game and had a 30% rush share, with a 30% share of the team’s rushing yards on the season. His TD price closed shorter than +100 in each of his two playoff games and this is the best price we'll see — I'd play it to -115.

Skyy Moore (+800): Moore did next to nothing with his seven targets vs. the Bengals, turning that into 13 yards, but with the injuries to the receivers ahead of him on the depth chart, a path to legit snaps is there and his TD can be had for +800.

Check out our Covers NFL hub for more picks leading up to Super Bowl 57.

Odds courtesy of DraftKings as of February 4, 2023.

Along with being the Super Bowl favorite at many sportsbooks, Jalen Hurts is favored at +120 to take home Super Bowl MVP honors. He and the Philadelphia Eagles will have to give it their all to take down the Chiefs and Patrick Mahomes (+125), but odds indicate that betting on either of these field generals to win SB MVP honors would be a great choice.

2023's Super Bowl will be played at State Farm Stadium in Glendale, AZ.

The New England Patriots were the last team to win back-to-back Super Bowls in 2004 and '05.

The Philadelphia Eagles (-125) are 1.5-point favorites to win Super Bowl LVII with the Chiefs a slight +105 moneyline underdog.

Super Bowl 2023 Predictions & Picks: Eagles and Chiefs Set to Meet in the Desert
Provided by