Despite a stout T.J. Watt-led defense and an abysmal offensive line, an uninspiring quarterback situation could potentially spell Mike Tomlin's first losing season in Steel City. We break it all down in our Pittsburgh Steelers betting preview.

If the oddsmakers are correct, the Pittsburgh Steelers’ reign of “terrible” in the AFC North is over.

The Steelers’ NFL odds have the team pegged to finish last in the division and the 2022 season win total of 7.5 is calling for Mike Tomlin’s first losing season during this 16-year tenure in Pittsburgh.

Pushing against that opinion is one of the best defensive units in the league and an offense working under someone other than Ben Roethlisberger for the first time since Usher and Lil Jon had us screaming “Yeah!” in the club. Yep, it’s been that long.

The Steelers’ 9-7 record in 2021 was a sham. Outside of a Week 1 shocker over Buffalo, that slaughtered many a survivor pool, Pittsburgh’s next eight victories would come with caveats (plus a tie against the frickin’ Lions!).

It barely beat Denver after blowing a 17-6 lead, edged Seattle without Russell Wilson in OT (also blew a 14-0 lead), beat the Bears by two (blowing 14-0 lead), squeaked past a Titans team missing Derrick Henry and A.J. Brown, and added a pair of divisional wins against the broken Browns and injury-ravaged Ravens (including one without Lamar Jackson). Oh, and six of those wins came at home.

All in all, the Steelers went a remarkable 8-2-1 SU (8-3 ATS) in one-score games (eight points or less), sat No. 5 on TeamRankings’ “Luck Ratings”, and was out-gained by 55.5 yards per contest and owned an average margin of -4.2 points. Yet, Tomlin avoided his first losing season in 15 years in the Steel City. WTF?

The 2022 win total says 7.5 victories. However, the lookahead lines have the Steelers as point spread favorites in only four games, with two games vs. Cleveland off the board. This year’s version of the Black and Yellow is not that different from last year’s offering but does face a tougher slate.

Pittsburgh sits tied for 12th in standard strength of schedule and seventh in my QB SOS and doesn’t get to ease its way into action. The Steelers started the last two years playing six of their first nine games at home. This season, Pittsburgh hits the bricks for five road games in the first eight weeks before a Week 9 bye. This team was 3-6 SU (4-5 ATS) as a visitor in 2021.

What will win bets: Defense

Even with a new defensive coordinator in Teryl Austin and assistant Brian Flores, the Steelers' stop unit will continue to cause chaos. Pittsburgh once again topped the NFL in sacks and owned a pressure rate of 26.1% while only blitzing on 24.9% of opponents’ dropbacks.

T.J. Watt is a one-man wrecking crew that can flip a game on its ear and has good talent feeding off his energy, including new addition LB Myles Jack. In the eight games in which the Steelers covered the spread last season, the team allowed less than 20 points in seven of those contests.

What will lose bets: Offensive line

The team’s faith in new QB Mitchell Trubisky (or rookie Kenny Pickett) and RB Najee Harris will all be for not if this offensive line doesn’t improve. The Steelers boast a discount O-line, after some less-than-sexy free agent additions, and that protection is projected to rank among the worst units in the league.

Pittsburgh’s quick-hitting pass attack was a necessity for Roethlisberger to survive and that skewed the protection metrics for the Steelers’ blockers, but it’s evident something is up when you’re averaging less than nine yards per completion and 3.8 yards per carry.

Black and Yellow bettors are going to be pissed when Pittsburgh allows only 17 points, and they still lose their wagers.

The Steelers have a notable discrepancy when it comes to win total vs. lookahead lines. If we split the OTB meetings with Cleveland (pending Deshaun Watson’s suspension), Pittsburgh is a favorite in five games at best – a 2.5-win gap compared to a season win total of 7.5.

As mentioned, the schedule is front-loaded with five road trips to playoff contending teams in the first eight weeks, while the Steelers host two other quality clubs in the Patriots and Buccaneers (and also play the Jets) in that stretch.

The Steelers are a roster I’d like to fade, but Mike Tomlin always keeps this team competitive. I’d expect them to finish around .500, with lots of high variance one-score games.

The rest of the AFC North is poised to pass Pittsburgh, with the Ravens getting healthy, the Bengals bolstered, and the Browns hoping to have Watson for at least half the season. Cincinnati gets the first crack at the old guard in Week 1.

Week 2 is an interesting home stand, welcoming New England to the newly-named Acrisure Stadium. The Steelers sit between +1 and +2 with a short total of 42.5 points. Pittsburgh played in 11 games with closing numbers of 44 points or less in 2021, going 3-7-1 Over/Under in those contests. Eight of those short totals came at home (2-5-1 O/U).

As of this writing, there’s no official suspension for Watson but it is unlikely he’ll play for the Browns in this Week 3 matchup – pending an appeal. The odds are off the board. Tomlin is 24-6-1 SU vs. Cleveland in the regular season and two of the Steelers' nine wins in 2021 came courtesy of the Browns.

Pittsburgh concludes the first half of the 2021 calendar vs. its in-state rivals, traveling to Philadelphia as a 4-point underdog in Week 8. Not only is this the team’s third road game in four weeks (and fifth in the first eight) but is the second of back-to-back away tilts after visiting Miami in Week 7.

That sets up a letdown spot, given Flores’ prickly past with the Dolphins and the team wanting to mash Miami, as well as a potential lookahead as the bye awaits in Week 9. Depending on the state of the Steelers, a struggling squad could be counting down the seconds to time away from the team.

As mentioned, the Steelers ranked out No. 7 in my QB strength of schedule and will lose the quarterback comparison in at least a dozen of their games in 2022. On top of that, many of those foes also flex a solid stop unit.

Pittsburgh plays nine games vs. teams that finished Top 11 in Football Outsiders defensive DVOA last season, and that doesn’t include two games with Baltimore (which will bounce back from injuries) and two games with Cincinnati (nasty pass rush and improved secondary).

The Steelers are projected to be a Top-5 defense after focusing energy on beefing up the run stop and have just two lookahead totals higher than 45 points. The team finished 7-10-1 O/U in 2021, including a 5-8-1 O/U mark against numbers of 45 points or less.

Najee Harris says he’d happily carry the ball 500 times in 2022 (which given his 3.9 ypc, would still go shy of 2,000 yards). The organization has other plans. According to reports, the Steelers don’t want to wear down their best offensive weapon and could trim Harris’ workload by as many as seven fewer carries per game. That’s a dip of about 27 yards per contest.

He finished his rookie campaign with exactly 1,200 yards on a total of 307 attempts – an average of 18 carries. Taking away seven of those runs – based on last season’s stats – would leave Harris with just 729 total rushing yards on the season.

Even with the potential of better run blocking and maturation in Year 2, Harris would be hard pressed to push 1,000 yards on the ground if he upped his production to 4.5 yards per carry. It seems silly that the Steelers would give their best weapon only 11 carries per game, but they could offset that with an increased role in the passing game.

We looked at a late-season trend with Mike Tomlin and the Steelers in last year’s betting preview, highlighting the team’s strong starts but flat finishes.

We specifically called out Tomlin’s troubles on the road from Week 13 onward, and Pittsburgh finished 1-2 SU and ATS in its three final away tilts (needing OT to escape from Baltimore in Week 18 with a win). That makes the Steelers 2-9 SU and 4-7 ATS as visitors between Week 13 and Week 17/18 since 2018.

The back end of the 2022 schedule does have winnable roadies at Atlanta and Carolina as well as a stop in Baltimore in Week 17, with that spread anywhere from Pittsburgh +5.5 to +7. 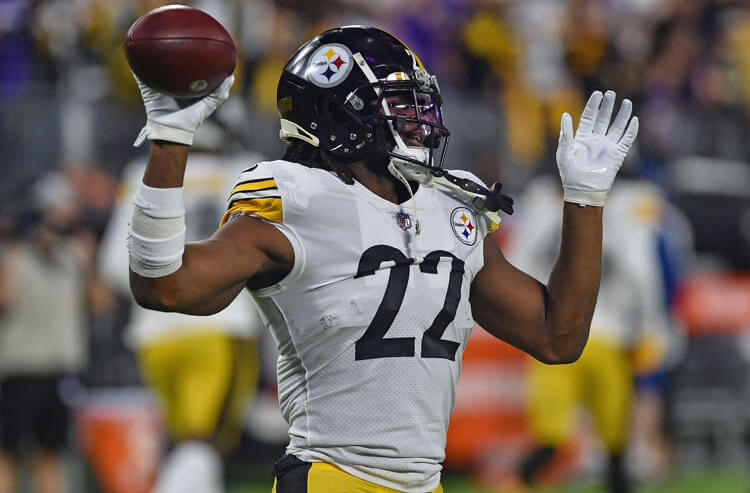