It didn't take long for Patrick Mahomes to start dominating the NFL and with a Super Bowl and MVP already under his belt, he's easily the most accomplished young QB in the league. We highlight some of his biggest wins in our team-by-team breakdown.

Patrick Mahomes has taken the NFL by storm since first taking the field as a starter in 2018, a historic MVP-winning campaign that saw him throw for 5,000 yards and 50 touchdowns.

Now four full seasons in, he's helped bring the Kansas City Chiefs back to the Super Bowl twice, including a victory against the 49ers in Super Bowl LIV (more on this below), and is fast approaching 20,000 yards — an NFL milestone he should clear early on in his 2022 campaign.

Additionally, his presence — in combination with stud pass-catchers like Travis Kelce and Tyreek Hill (now in Miami) — has made the Chiefs one of the league's most dangerous offenses year after year.

I'm with the #chiefs for the next two days. I'd say Patrick Mahomes is off to a pretty good start to his NFL career. pic.twitter.com/YFMCsHk87u

Let's dive into Patrick Mahomes' accomplished career and see where he stacks up against each and every NFL team — both in the regular season and postseason.

Mahomes vs the Buffalo Bills

It's safe to say that at this juncture of his career, Mahomes' most relevant opponent comes in the form of Josh Allen and the Buffalo Bills.

These two star QBs have split regular-season meetings, but Mahomes has gotten the better of Allen in those critical postseason showdowns. Mahomes & Co. hung 38 on the Bills in the 2021 AFC Championship Game en route to a 14-point victory. Pat threw for 325 yards and three touchdowns, completing 29 of 39 passes for the game.

Last year's instant classic of an AFC Divisional Round meeting saw Mahomes and Allen trading blows, but Pat ultimately got the last laugh. With just 13 seconds left, Mahomes completed a two-play, 38-yard drive to get the Chiefs into field goal range and force overtime. Then, after KC won the OT coin toss, he threw a touchdown pass to Travis Kelce to send the Chiefs to their fourth consecutive AFC title game.

Needless to say, we'll be seeing much more of these two gunslingers in the AFC playoffs for years to come.

Mahomes vs the Denver Broncos

Since taking the reigns in KC, Mahomes has helped the Chiefs win the AFC West each of those four years — thanks in some part to their dominance of the Denver Broncos.

It also goes beyond Mahomes' years, with Denver winless against KC since 2015. However, that may begin to shift with Russell Wilson now under center.

Mahomes vs the Las Vegas Raiders

Another AFC West foe that Mahomes has consistently gotten the better of is the Las Vegas Raiders.

Mahomes started his career 4-0 against Vegas before dropping a 40-32 shootout at home in 2020. Last season was a much different story, though, with the Chiefs taking both divisional tilts by a combined score of 89-23. Mr. Mahomes combined for 664 yards and seven touchdowns in those games.

Derek Carr will gladly take the help of newly-acquired stud receiver Davante Adams as the Raiders look to keep up in these high-octane battles.

Mahomes vs the Baltimore Ravens

While not as overwhelming as Josh Allen, Lamar Jackson has also found his name tied to Mahomes in a variety of ways.

After Lamar followed up Mahomes' 2018 MVP campaign with one of his own in 2019, it appeared these two would be butting heads in the AFC. However, Mahomes' Chiefs took the first three matchups: the first in overtime, the second by five points, and the third in a 14-point thumping.

Jackson and the Baltimore Ravens responded last year in Week 2, shocking the Chiefs 36-35 in a game Lamar threw for 239 yards and ran for 107 more. Sadly, there's no matchup on the docket for 2022.

Mahomes vs the San Francisco 49ers

It's hard to break down Patrick Mahomes' career without mentioning his most important victory: Super Bowl LIV against the San Francisco 49ers.

He completed 26 of his 42 passes, threw for two touchdowns, and rushed for a third. The performance earned him Super Bowl MVP honors, making him the third youngest recipient and youngest quarterback to win it (24 years, 138 days old).

Lead the @Chiefs to an all-time Super Bowl comeback?

That's how you get a 10-year extension. @PatrickMahomes pic.twitter.com/m2lsu0NarM 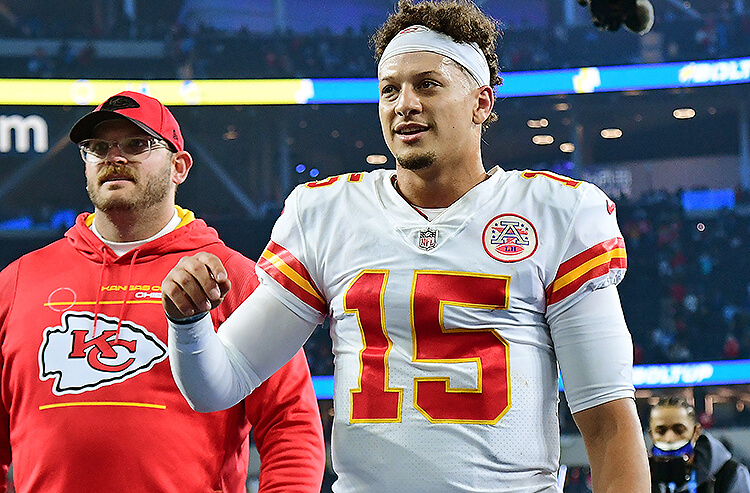 Patrick Mahomes' Record Against Every NFL Team
Provided by