The G-Men are in a season of transition with new bench bosses and Daniel Jones still somehow under center. But can this offense stay healthy enough to summon life and reward backers? Find out in our 2022 New York Giants NFL betting preview.

The New York Giants are injecting their franchise with a dose of spicy Buffalo sauce after poaching new GM Joe Schoen and head coach Brian Daboll from the Bills.

The expectations are tempered for this transition, especially with much-maligned quarterback Daniel Jones under center. The Giants’ NFL odds don’t paint a pretty picture in terms of futures, but there could be betting value in Big Blue as it pertains to their win total and early-season spreads.

Now that we have your attention, here’s our New York Giants 2022 betting preview.

A new GM and a revamped coaching staff is usually cause for concern when betting NFL futures, but when you consider that shakeup comes on the heels of the Joe Judge debacle, there’s only one way to go: Up.

Things could absolutely go south in East Rutherford and a bet on the Over 7 wins is more of a play against the Giants’ 2022 opposition than a true bet on New York’s success. New York has one of the softest schedules in the NFL — in terms of standard SOS, QB SOS, and travel — and plays only one true road game before Week 7.

The Giants are getting some buzz among the sharp sect this summer and there are books with the win total up to 7.5 (Over +140) if you’re all in on Big Blue in 2022.

What will win bets: Soft schedule

There’s an opportunity to make money with this Giants squad early on. The lookahead lines have N.Y. pegged at +4 or higher in four of their first six contests, with the other two matchups set at PK (vs. Carolina) and as low as -2.5 (vs. Chicago). With four of the first six contests at home, a soft entry in 2022 gives grace for the offense to grow in Daboll’s new playbook.

Jones is in a contract year and has solid weapons around him in WRs Kenny Golladay and Kadarius Toney, who were plagued by injuries in 2021. Mix in Saquon Barkley as a run-catch option and this offense could find its footing quick enough to cover those early spreads — or at least be healthy in those openers.

What will lose bets: Quarterback play

Big Apple football fans are surprised to see Jones still tabbed as No. 1 on the depth chart heading into 2022, but considering the team’s financial shackles, what else could it do? Jones shat the bed in just about every passing stat – basic and advanced – and continued to kill bettors with his careless play, throwing seven INTs and fumbling twice in just 11 games last season.

The reports coming out of OTAs were a little cloudy, considering Jones wasn’t throwing to his top receivers in 11-on-11 drills. That said, he had ugly throws that should have been picked off, would have been sacked a few times if not for that red jersey, and watched his WRs drop balls while leaning on RB Saquon Barkley on short tosses. Not what New Yorkers want to hear now that sports betting is legal in the Empire State…

The 2022 schedule is set up for success in Daboll’s first year, ranking out 29th in SOS with nine home games and only seven true road trips (plus a London game with Green Bay). And outside of that international outing and a Week 8 trip to Seattle, the G-Men only venture as far as Minnesota in Week 16.

While Jones ranks out as one of the worst starting quarterbacks for 2022, New York won’t find itself out-gunned by many most weeks as the Giants sit 30th in my QB SOS and have comparable quarterback matchups in at least eight of their 17 contests.

The lookahead lines have the Giants as point spread favorites in only three games, but also have two pick’em lines on the board and seven other contests with New York getting +4 or lower.

The Giants are a potential surprise team in many people’s eyes, and I do like their coaching upgrades on both sides of the ball. However, this is still a Bottom 6-8 roster, and I am not sold that the Giants did enough to upgrade the offensive roster around Daniel Jones.

The Giants have only one true road game in the first six weeks of action and that comes in Week 1 at Tennessee. New York has stayed steady at +6.5 for the opener over the summer months and lugs a 2-10 SU record and 3-9 ATS mark in Week 1 since 2010.

An extended home stand kicks off against Carolina in Week 2. The Giants were 1-point faves for the home opener, but the game moved to pick’em after the Panthers added QB Baker Mayfield. This total is sitting at 42.5 O/U and New York is 6-17-1 O/U in home games since 2019, including 0-7-1 O/U last year.

The Cowboys and Giants add another chapter to their storied rivalry in Week 3, with New York catching +4.5 points in East Rutherford for Monday Night Football. Jones will be a downtick in QB quality for this ball-hawking Cowboys secondary after defending Tom Brady and Joe Burrow in the first two games of 2022.

The 2022 slate doesn’t lay too many traps for New York, save for this Week 8 cross-country trip to the Emerald City where the G-Men are getting just under a field goal from the host Seahawks.

The Giants go to London to play Green Bay in Week 5, come back to MetLife to play Baltimore in Week 6, before back-to-back roadies at Jacksonville and Seattle. New York is effectively playing its third game in four weeks away from Jersey while racking up the air miles and could also get caught looking ahead to a bye in Week 9.

The Giants’ offense needs a few key things to happen to be respectable:

The schedule is frontloaded with home games, but that stretch could be wasted if those three keys don’t come to fruition.

As for the defense, this has been an underrated unit — given the lack of support on the scoreboard — the past two seasons. Enter Wink Martindale and his blitz-happy defense. The Giants’ stop unit will at least be dangerous, after posting a pressure rate of just 20.1% last season (third-lowest).

Dialing up the pressure on a collection of rival quarterbacks ranked out 30th in my QB SOS should make moderate passers worse and bad passers god awful. That lends itself to more Unders when the Giants face those less-than-stellar QBs.

This is a contract year for the former No. 2 overall pick, so the Giants won’t hold back in terms of workload and will try to squeeze every yard they can from Saquon Barkley’s brittle body. Improvements on the offensive line and a lineup of foes that features just four teams inside the Top 10 in EPA allowed per run help Barkley’s cause.

Daboll breathed life into the corpse of Reggie Bush during his one-year tenure as OC in Miami, helping Bush get to 1,086 yards rushing along with 296 yards receiving in 2011. During OTAs, the Giants utilized Barkley all over the place, including as a slot and outside receiver. As we’ve seen in today’s NFL, offenses want to get the ball in the hands of their best playmakers – positions be damned.

Non-conference games have been the rock and sling for the Giants in recent years, going just 4-13 SU and 5-12 ATS against AFC competition since 2018. That includes a 1-4 SU mark and 2-3 ATS count in non-conference clashes last season.

The 2022 schedule sends the AFC South the Giants’ way along with a home date against Baltimore. 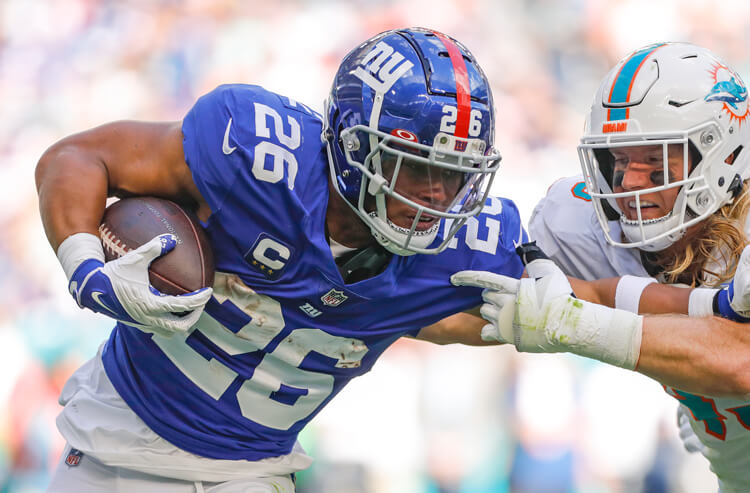