NFL Draft odds are already on the board for the 2023 draft and after a down year, quarterbacks are once again littered across the board. Check out how Bryce Young, CJ Stroud, and all of the best prospects stack up in our odds to go first overall.

The 2022 college football season is over, following Georgia's dominant win over TCU in the CFP National Championship.

The theme of the 2022 draft was a departure from recent drafts, in which quarterbacks have been picked early and often. In that regard, an early look at 2023 NFL Draft odds suggests a return to the norm, with a pair of passers topping the board.

Here's a look at the 2023 odds to go first overall, just a few months out from the draft.

Odds courtesy of FanDuel Sportsbook as of January 30, 2023.

Favorite to go first overall in the 2023 NFL Draft

The 2022 Heisman winner was unable to defend his Heisman or take his Crimson Tide back to the natty, but he did little to shake his status as one of the draft's prizes. Young was superb in his second full season as the Tide's starter, finishing with 3,328 passing yards and a 32:5 touchdown-to-interception ratio as a junior.

Alabama passer Bryce Young edged out Ohio State QB CJ Stroud for the Heisman in 2021, and early odds say those roles will be repeated at the top of the 2023 NFL Draft. In his second season as the Buckeyes' starter, Stroud was excellent, throwing for 3,688 yards and 41 touchdowns to just six interceptions. While not as mobile as his Bama counterpart, Stroud should be among the first names called in the spring.

Under Nick Saban, Alabama has produced an endless line of solid-to-great pros on the defensive side of the ball. EDGE Will Anderson has a chance to be among the absolute best. Anderson picked up seven sacks and 10.5 tackles for loss as a freshman, followed it up with 17.5 sacks and 31 TFLs as a sophomore, then bowed out of Tuscaloosa with a 10-sack, 17-TFL junior season.

The presence of high-level quarterbacks could crowd Anderson out of the first-overall pick conversation but make no mistake, the Bama stud is the best defensive player in the 2023 draft.

Jalen Carter was an absolute monster during his tenure in Georgia, helping lead the Bulldogs' top defense to two straight national championships. The 6-foot-3, 300-pound mammoth may be the best defensive tackle entering the draft since Aaron Donald, and he finished the 2022 college football season with the third-best Pro Football Focus defensive rating among all FBS schools in 2022 (92.3).

• Quarterback is the most important position on the football field and while most first overall selections have played QB, quarterback hunters have been in high demand as well. With Walker's selection yesterday, four of the last 16 No. 1-overall picks were pass rushers.

• All but two of the last 15 NFL Drafts have seen an offensive lineman get picked in the Top 10, with 2022 being no different as Ikem Ekwonu, Evan Neal, and Charles Cross went sixth, seventh, and ninth.

Sportsbooks will post odds for the player to go first overall in the draft as soon the previous year's draft is over. Once the college football season begins in September, these odds could change weekly depending on how players are performing as well as the evaluations of trusted draftniks such as Mel Kiper Jr.

In addition, this NFL futures bet may also take into account the team needs of the worst team(s) in the NFL.

After the NCAA football season is over, NFL Draft odds will solidify after key events such as the underclassmen declaration deadline, the NFL Scouting Combine and pro days. In the weeks leading up to the draft, sportsbooks will offer more NFL Draft prop bets.

The odds to go first overall in the NFL Draft will typically look like this:

This means that if you placed a $100 bet on Stroud, you would win $135 if the Buckeye QB goes first overall in 2023. When you get closer to the draft and there is a general consensus on who will go first overall, you might see a player with a minus sign (-) ahead of his odds, like this:

This means that you'd have to bet $450 to win $100 on Young being drafted first overall.

Above we have posted the American odds for the 2023 NFL Draft. However, these are easy to convert to decimal odds or fractional odds with our odds converter tool.

Georgia defensive end Travon Walker went to the Jacksonville Jaguars at No. 1 overall.

Among the top prospects are three Top-5 finishers in Heisman voting last year, including the winner, in Bryce Young, CJ Stroud, and Will Anderson. 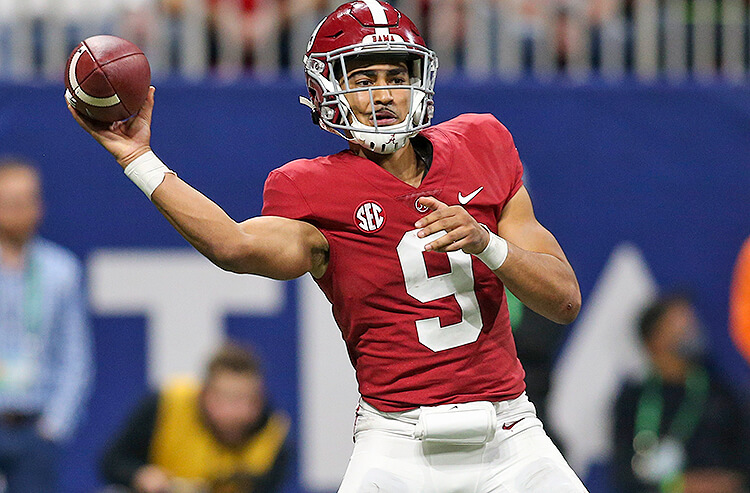 NFL Draft Odds 2023: Quarterbacks Back on Top
Provided by