Detroit hasn't had much success in recent Thanksgiving Day games, but that may change against the Bills today. With Josh Allen not at 100%, our NFL betting picks like the Lions to stay competitive in a closer-than-expected match. 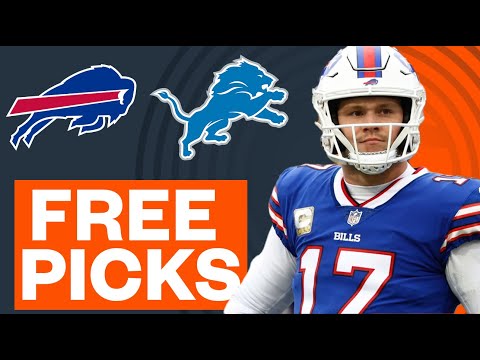 Week 12 in the NFL kicks off with Thanksgiving Day action this afternoon with the Detroit Lions hosting the Buffalo Bills. Like turkey, mashed potatoes, gravy, and stuffing, the Lions are a staple of Thanksgiving festivities. But unlike those delicious dishes, Detroit tends to leave you feeling unsatisfied.

The Lions haven't won on this holiday since 2016, and bookmakers expect them to lose again with NFL odds hitting the board with Buffalo as a 9.5-point road fave. Here are my free Lions vs. Bills NFL betting picks and predictions for November 22.

Bills vs Lions picks and predictions

The Lions are on a three-game winning streak and are playing their best ball of the season, especially on defense. Meanwhile, their offense is a respectable 10th in DVOA according to Football Outsiders and should be able to move the ball against a Bills defense that has struggled lately.

With this line sitting at double digits, oddsmakers are clearly expecting Bills quarterback Josh Allen to again play through the injury on his throwing elbow despite the short week.

While he should suit up, Allen doesn't look 100%. Through the first six games of the season, the Bills QB was the MVP favorite. In the last four contests, he has passed for more than 220 yards just once while throwing six interceptions.

On Sunday he struggled with his accuracy and arm strength against the Browns, and although his smart decisions led to a victory, the Browns outgained Buffalo 396-357.

The Bills leaned on their running backs in that contest and while that might lead to another win on Thursday, it's not an ideal gameplan for covering a big spread.

MORE NFL FREE PICKS
Bet with one of Canada’s best

Looking to bet on some Bills action? Join Sports Interaction, the best in Canada for new bettors.

The Bills actually played on Sunday in Detroit after a snowstorm in Buffalo pushed their scheduled home contest against the Browns to Ford Field.

They took advantage of the indoor surface and beat the Browns 31-23, allowing them to bounce back from a two-game slide where they were upset in close contests against the Vikings and Jets.

Despite those recent defeats, Buffalo is still tied with Miami for the best record in the highly-competitive AFC East and remains the Super Bowl favorite with +375 odds of winning the championship.

The Lions entered this month with the worst record in the league but have since reeled off three consecutive wins — covering the spread in each contest.

They're coming off a 31-18 road win against the Giants where their defense put together its best performance of the year by bottling up New York's elite ground game and forcing three turnovers.

They limited Giants' star running back Saquon Barkley to just 22 yards on 13 carries, which is pretty shocking for a defense that ranks 30th in the NFL in rush EPA.

Detroit also ranks 30th in dropback EPA, and that's where it'll likely be burned by the Bills — depending on the health of Allen. Allen has been dealing with a UCL injury to his throwing elbow since Week 9 and while he was limited in practice on Monday he has no injury designation.

When Allen is healthy, Buffalo has one of the most explosive offenses in the NFL and ranks second in EPA/Play. Even with its franchise QB playing through an injury in the last two games, it managed to hit the 30-point plateau.

Detroit has been atrocious defensively but has been better on offense ranking 16th in EPA/Play. With the exception of a couple of ugly offensive performances against the Cowboys and Patriots (the two best DVOA defenses in the league), the Lions have been able to put up points.

They'll look to take advantage of a Bills' defense that was one of the best in the league through Week 8 but has struggled since. Buffalo gave up 174 yards on the ground to the Jets in Week 9, surrendered 481 total yards to the Vikings in Week 10, and allowed Jacoby Brissett to throw for 324 yards on Sunday.

Injuries have hurt the Bills on that side of the ball with Damar Hamlin struggling to replace All-Pro safety Micah Hyde while Pro-Bowl linebacker Tremaine Edmunds and end Gregory Rousseau have missed the last two weeks.

The Lions are 7-2 ATS in their last nine home games. Find more NFL betting trends for Bills vs. Lions.