Texas A&M should be sounding the alarms after two weeks, but the books are still giving the Aggies cred. We're not buying it against Miami, and our Triple Option college football picks think the Hurricanes have a chance to do more than keep things close. 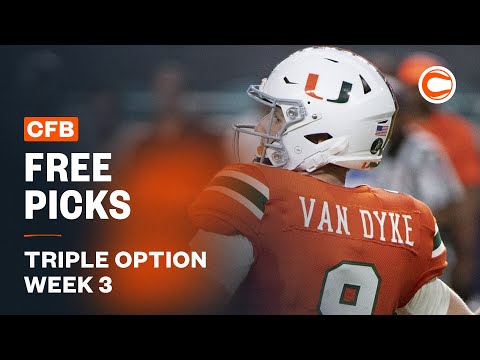 The Triple Option turned a profit last week, so now let’s go back-to-back with Week 3 of the college football season upon us.

This week, there's a towering total that I still think can be toppled by Southern Methodist and Maryland. It’s also time to go back to the well with Mississippi State’s Air Raid offense as the Bulldogs open SEC play against LSU. And sportsbooks are still overvaluing Texas A&M ahead of this week’s big matchup vs. Miami, despite a shocking upset to Appalachian State last week.

Here are my best college football picks for betting Week 3.

If you're signing up for a new sportsbook for some college football betting, here are two of the best bonuses* available:

B) New users at BetMGM can bet $10 and get $200 in free bets if any college team scores a touchdown! Sign Up Now

*Eligible USA locations only. Also, check out our full list of college football promo codes for 2022.

Oh, boy. Slide on your point-scoring pants and get ready for a barn burner. Because if you like points, then Southern Methodist vs. Maryland is the game for you.

At 73.5 it is one of the highest totals on the board in Week 3 of the college football season. And yet, it still might not be high enough.

Those who haven’t been paying attention to Taulia Tagovailoa and the Terrapins in their first two games against Buffalo and Charlotte, (and I don’t blame you for passing on those matchups) have missed Tua’s little brother absolutely carving up opposing defenses.

Tagovailoa has thrown for 681 yards and four touchdowns while completing an awesome 78.5 % of his passes. And his performance last week against Charlotte was one of the best of his career, shredding the 49ers for 391 yards and four scores while adding another on the ground in three quarters of action.

The Terps signal-caller also has some great weapons at his disposal. The Maryland WR room is one of the best in the country with Rakim Jarrett, Dontay Demus Jr., Jacob Copeland, and Jeshuan Jones. While a rushing attack that averages 172 yards per game gives the offense balance.

Long story short, the Terps will be a problem for Southern Methodist’s defense. A defense that ranked 125th in the country last season, giving up 284 passing yards per game to opposing teams.

One good thing that returns from last season for SMU is quarterback Tanner Mordecai. The senior signal-caller is coming off a year where he threw for 3,628 yards with 39 touchdowns, and he’s picked up right where he left off putting up 644 yards and seven scores as the Mustangs have averaged 46.5 points per game.

He should also have the opportunity to let it fly against a Maryland defense that was almost as bad as the Mustangs', ranking 107th in passing yards per contest.

This is a big number. But I can’t stay away. It’s going to be bombs away for both teams all night long.

The Texas A&M Aggies were one of the many victims of a massive upset in what was a crazy Week 2 in college football. The Aggies fell 17-14 to Appalachian State as 18-point favorites in front of the 12th Man at Kyle Field.

But it looks like oddsmakers are overlooking all the issues that have been ailing the Aggies through the early part of the season heading into this weekend’s matchup with the Miami Hurricanes. Because they're giving Texas A&M too much respect as a 6.5-point favorite against a quality Miami team.

Maybe the writing was on the wall for this upset after an uninspiring start against Sam Houston State. Either way, Texas A&M has problems. Lots of them. The offensive line has struggled in pass protection. The defensive line (which is supposed to be a strength) isn’t creating enough pressure.

But worst of all, is that Jimbo Fisher still hasn’t addressed his quarterback problem, because Haynes King ain’t it. King followed up throwing two picks against S.H. State by throwing for just 97 yards in last week’s loss to App State.

While it's hard to take much away from wins over Southern Miss and FCS Bethune Cookman, Miami is taking big strides in Mario Cristobal’s first season at the helm. Tyler Van Dyke is a legit NFL prospect at quarterback with plenty of weapons around him.

On defense, the Hurricanes are strong in the trenches, can pressure the quarterback, and have some real shutdown pieces in their secondary.

The defenses in this matchup are comparable. But the difference in quarterbacks is huge. Mix in the mental hurdles the Aggies will have to go over to bounce back from last week’s loss and the Hurricanes not only should keep this game close but will have a chance to win outright.

Mississippi State came through for us last week, easily covering the 10.5-point chalk in a 39-17 road victory over upstart Arizona, improving to 2-0 SU/ATS this season. So, we’re going back to the Bulldogs’ well when they open SEC play at LSU this weekend.

The Tigers responded to their season-opening loss to Florida State with a 65-17 dismantling of FCS Southern. But as I’ve said many times in the past, it’s an FCS team and you can’t take a whole lot away from those results.

But there is something we can take away from the Bulldogs through two weeks —that Mike Leach’s Air Raid offense is in good hands with quarterback Will Rogers.

Rogers looks as comfortable as ever in Year 3 of Leach’s pass-happy system, throwing for 763 yards and nine touchdowns through the team’s first two games — and to put it simply, he will be a problem in this matchup.

Meanwhile, LSU didn’t generate much pressure on Jordan Travis in its loss to FSU and allowed the Seminoles QB to take shots down the throw for 260 yards, two scores, and no picks. Rogers is a much better passer.

Even though the offense gets most of the headlines for Mississippi State, the defense isn’t too shabby either. The Bulldogs limited opponents to just 3.9 yards per carry last year and should do a better job of containing Tigers QB Jayden Daniels, forcing a guy with a career 63.3 completion percentage to throw more, and in turn, take advantage of an LSU offensive line that looked suspect against Florida State.

In the end, Rogers will be the difference maker here and will make a couple of big plays to help his team another victory, covering the short spread in the process.

OK. So, Iowa is a 23.5-point favorite this week. And I get it. They're at home and Nevada stinks. But the Hawkeyes have scored exactly 14 points and one offensive touchdown in two games, which included a matchup against an FCS opponent. And now you want them to not only score 24 points but cover them? No thanks.

We talked about how SMU and Maryland should light up the scoreboard this week, but the honor of highest total goes to Fresno State vs. USC at 74.5. The Trojans' offense looks elite with Caleb Williams, Jordan Addison, and Travis Dye. But the Bulldogs' O isn't too far behind with Jake Haener, Jalen Cropper, and Nikko Remigio. Mix in two suspect defenses and this towering total could still be in trouble of toppling.

This line has seen some interesting movement. It hit the board at 14.5, was quickly bet to 15.5, and was 16.5 by Tuesday. But sharp money on Wyoming brought the line back to the opening number on Wednesday. But as of Friday morning, it’s back up to AF -16.5.

I’ll tell you right now: I grabbed Air Force at both -14.5 and -15.5 and would play them up to -16.5. The Falcons have rushed for over 1,000 yards in their first two games. And despite back-to-back wins, Wyoming let Illinois rumble for over six yards per carry in a 38-6 season-opening loss. 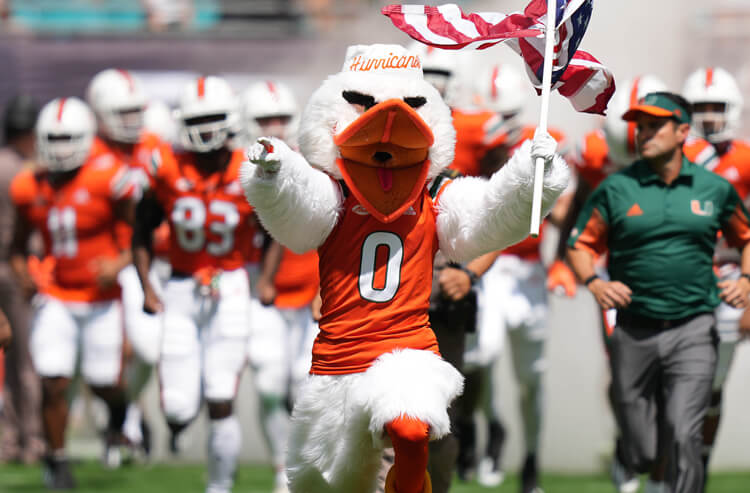