Miami vs Texas A&M Odds, Picks and Predictions: Aggies Don't Have Weapons to Pull Away

Both Texas A&M and Miami boast formidable defenses, but with the Aggies' current form and quarterback troubles, our college football picks don't think they'll be too much for Tyler Van Dyke and the 'Canes. Read on and find out why.

The Texas A&M Aggies are coming off a stunning defeat to Appalachian State last week in a game where they were nearly 20-point chalk, at Kyle Field of all places.

And if the Aggies don’t recover from their shell-shocking last weekend they could be in trouble once again as they welcome a very talented Miami Hurricanes and quarterback Tyler Van Dyke to town.

However, it appears that sportsbooks are overlooking what happened against the Mountaineers and are still overvaluing the Aggies based on their preseason potential.

That means there is a bet out there that can take advantage of that. Find out what it is in my best college football picks and predictions for Miami vs. Texas A&M.

The Texas A&M Aggies falling to the Appalachian State Mountaineers in front of the 12th Man at Kyle Field was nothing short of stunning. But it looks like oddsmakers are overlooking all the issues that have been ailing the Aggies through the early part of the season heading into this weekend’s matchup with the Miami Hurricanes —they're giving Texas A&M too much respect as a 6.5-point favorite against a quality Miami team.

There were way too many issues for Jimbo Fisher’s squad in their loss to the Mountaineers. The defensive line could have played better. The offensive line definitely should have. But the most glaring issue for the Aggies — not only last week but during Fisher’s tenure at College State — has been the play under center.

Haynes King threw for only 97 yards in last week’s loss and continued to have trouble with turnovers. So, Fisher will try something different against Miami and give LSU transfer Max Johnson a chance to lead the offense. However, I’m not sure if that’s much of an upgrade since Johnson was unable to beat King for the job in fall camp.

Meanwhile, it's hard to take much away from wins over Southern Miss and FCS Bethune Cookman, Miami is taking big strides in Mario Cristobal’s first season at the helm. Tyler Van Dyke is a legit NFL prospect at quarterback with plenty of weapons around him.

On defense, the Hurricanes are strong in the trenches, can pressure the quarterback, and have some real shutdown pieces in their secondary.

This has a chance to be a defensive battle, but it’s the Hurricanes who have the difference-maker at quarterback. The matchup against the Aggies' defense won’t be an easy one but if Van Dyke can make a few plays downfield the Hurricanes should be able to keep this one close in a low-scoring ball game. Take the points with The U.

A) Texas A&M to score first and win vs. Miami BOOSTED to +114 at BetRivers! Bet Now

Texas A&M opened this matchup as a 5.5-point favorite and has bounced back and forth between that number and 6.5. But as I said in the best bet section, I believe oddsmakers are still giving them too much respect based on preseason expectations.

Yes, Kyle Field is worth a few points and the 12th Man should be rocking in hopes of a big bounce-back. However, that doesn't change the fact that this Aggies offense ranks 102nd in scoring and rushing yards per game. And that's from output against FCS Sam Houston State and an Appalachian State team that gave up a 60-burger to North Carolina the week before.

The Aggies' issues on offense are for real, and I’m not sure Johnson is the answer. Plus, the Miami defense is good enough to help those issues continue. While the Texas A&M defense is still very good, they have a tougher assignment against Van Dyke.

It’s just too many points for an inconsistent offense whose confidence is likely in the toilet after last week’s humbling loss. I have this game lined closer to 4.

The total in this matchup also presents an interesting opportunity. The number hit the board at 48.5 on Sunday but by Tuesday, Under money had driven it all to the current number of 44.5. And I’m inclined to agree with what the money is saying, even at the current number.

For starters, one benefit to moving from King to Johnson is that Johnson should do a better job than King did at limiting the turnovers. That should help the Under in a couple of ways: obviously sustaining drives and milking the clock, while also not giving Miami the opportunity for quick scores from short fields.

Meanwhile, even though the Miami offense has put up some solid numbers through a couple of games, they haven’t been tested to this point. And despite all the Aggies' issues, this defense is still a strong one.

Texas A&M is limiting still limiting opponents to a minuscule 3.7 yards per play and has only surrendered two offensive touchdowns. And the 112.5 passing yards per game is sixth-best in the county at this point.

This game feels like it will be a battle and I would lean towards the Under. 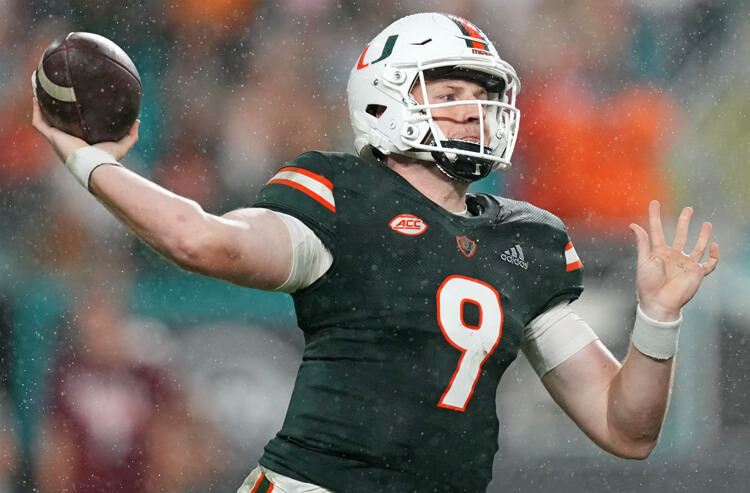 Miami vs Texas A&M Odds, Picks and Predictions: Aggies Don't Have Weapons to Pull Away
Provided by