The undefeated TCU Horned Frogs keep winning even when it isn't pretty. Favored by 10 at most books over Iowa State, there might be better avenues for your bet. The Cyclones boast a stingy defense that could force TCU to play it safe. 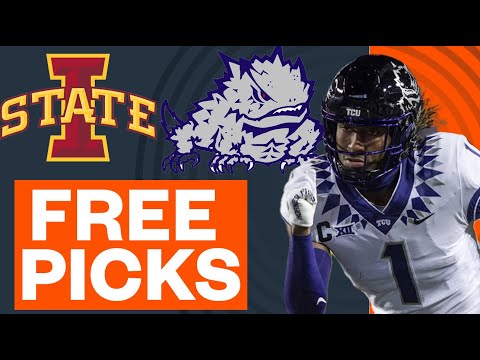 What a wild ride it's been for TCU in Year One under head coach Sonny Dykes.

Sitting at a perfect 11-0, the Horned Frogs have already clinched a spot in the Big 12 Championship game and are firmly entrenched in the College Football Playoff discussion — something that would have gotten you laughed at if you brought it up before the season.

Before all of that, Iowa State (4-7) awaits in the regular season finale.

Can the Cinderalla story continue for at least one more week?

Check out our college football picks and predictions for the Iowa State Cyclones and TCU Horned Frogs on Saturday, November 26 to find out.

TCU is no longer in a position where it needs to win games convincingly in order to win the approval of the CFP committee. The task at hand is simple, on paper at least. Advance. Survive. Win, by any means necessary.

If the Horned Frogs win out, they’re assured a spot in the College Football Playoff as an unbeaten Power 5 team. They’re the first Big 12 team to start the season 11-0 since the current iteration of the league took form in 2012, and there are no competitors elsewhere to grab the Horned Frogs' spot in the playoffs — so long as they win! It doesn’t need to be dominant, such as last week’s last-second field goal triumph over rival Baylor, so long as the outcome is victory.

The Horned Frogs’ final regular-season opponent is an Iowa State team struggling under Matt Campbell. The Cyclones lost a lot of key pieces from a year ago, including four-year starting quarterback Brock Purdy, all-world running back Breece Hall, and numerous key defensive pieces. Those losses have been evident on the field, as the Cyclones rank dead last in the Big 12 with a 1-7 record in conference play.

The key issue for Iowa State has been a lackluster offense managing just 20.7 points per game. The Cyclones have struggled to move the ball in any way, ranking 101st in expected points added per play, 102nd in success rate, and 91st in explosiveness.

First-year starter Hunter Dekkers, a big lefty, helms an unspectacular passing attack that ranks 67th in EPA per pass. They lack the ability to consistently pick up chunk yardage in the air, ranking 106th in passing explosivenes. They notably struggle in standard situations, ranking 120th in standard downs success rate. The rushing attack has been especially poor, checking in at 128th in EPA per rush, 125th in rushing success rate, and 121st in rushing explosivness. That should come as no surprise considering the offensive line has struggled mightily, ranking 125th in line yards and 110th in stuff rate.

TCU doesn’t get a lot of acclaim for its defense, but the Horned Frogs are solid on that side of the ball, allowing 25.5 PPG. They recently held Texas — a vastly superior offense to Iowa State’s — to just 10 points while not allowing an offensive touchdown all game.

For as bad as the Cyclones have been on offense, they’ve been as good on defense. They’re allowing just 16.5 PPG, good for eighth nationally. The advanced stats love them too, as they rank 19th in EPA per play, 40th in success rate, and third in explosiveness. Limiting big plays against TCU is crucial, and Iowa State may be primed to do just that.

TCU’s offense may not be operating at 100% considering three of its top playmakers (running back Kendre Miller as well as receivers Quentin Johnston and Derius Davis) were absent by the end of the Baylor game due to injury. Miller and Davis are both back practicing, but Johnston’s lingering ankle injury is a concern.

A hobbled TCU team will be looking to do all it takes to advance and survive, so this does not have the makings of an offensive game. Iowa State has struggled mightily to move the ball all year while playing great defense, so this spot sets up well for an Under.

Looking to bet on some college football action? Here are two of the best bonuses* available:

The spread is set at TCU -10 at most locations, although a -9.5 is also available at the time of this writing.

The Horned Frogs have been a bettor’s delight this season, going a cool 8-2-1 against the spread. One of those ATS losses came last week in the 29-28 win over Baylor, which wasn’t enough to cover the 2.5 points.

The Cyclones have been on the other side of things, posting an ugly 4-6-1 ATS record. They have especially struggled against strong opposition, going just 2-8-1 ATS against teams with a winning record.

A significant quarterbacking advantage lies with the Horned Frogs, as Max Duggan is leading Dekkers in yards per attempt (9.3 to 6.8) and passing touchdowns (26 to 18) while tossing significantly fewer interceptions (three to 13).

It’s hard to bet against TCU at this point, but it’s hard to have much confidence in it covering this number with its three best skill position players dinged up and the motto for this one just being “survive and advance.” If this one is as low-scoring as most Iowa State games, it’s likely this is a close game in which trust in TCU to win by two touchdowns is too much for me to ask. Lean toward Iowa State on the spread.

If you bet Iowa State Unders in every game this season, you’d be up a pretty penny. The Cyclones have cashed the Under in nine of 11 games, and their games are averaging just a combined 37.2 PPG. If you isolate for just conference games, Iowa State is a perfect 7-0 to the Under in the Big 12.

The Cyclones struggle in most major offensive categories, ranking 119th in rushing yards (103.4 YPG), 81st in total yards (373.4 YPG), and 110th in points scored (20.7 PPG). They notably stand out in passing yards, where they rank 29th nationally by averaging 270 YPG. They haven’t been particularly efficient, however, as that passing yardage is mostly due to them playing from behind in the majority of their games.

This will be a battle of strength-on-strength when TCU has the ball. The Horned Frogs rank 12th in total yards (482.1 YPG) while the Cyclones are 8th defensively at 277.3 YPG. Although Miller and Davis seem to be trending in the right direction considering they’ve both been practicing this week, it’s still concerning if they’re less than 100% and Dykes opts to give them fewer reps than normal if they build an early lead. Miller was named a semifinalist for the Doak Walker Award while Johnston is a Biletnikoff Award Semifinalist, so their health is especially crucial in this handicap.

Iowa State is 7-0 to the Under in its last seven conference games. Find more NCAA betting trends for Iowa State vs. TCU.