With four dominant performances under their belt to start the season, the defending champion Georgia Bulldogs have overtaken Alabama for the top spot on the 2023 CFP National Championship odds board. You can check out the full odds below.

The madness of college football continued over the weekend with Week 4 action now in the rearview.

This weekend saw its fair share of upsets and crazy finishes, but the titans still live atop the board to win it all in betting odds, with Georgia now the top dog after cruising to its fourth win of the season.

Alabama and Ohio State are the only other two programs with better than 10/1 odds, but you can check out the full betting board for the 2022-23 college football season below.

The Georgia Bulldogs won a college football championship for the first time in 41 years as they finally managed to defeat Saban and the rival Crimson Tide in the 2022 title game.

Their defense of that title kicked off with a 49-3 romping of the No. 11-ranked Oregon Ducks, a 33-0 shutout win over Samford, and a 48-7 crushing conference win over South Carolina. They did, however, look a little more human in a 39-22 win over Kent State over the weekend.

The insane dominance — especially defensively — has started to reflect in the odds, even taking the top spot from Alabama at a handful of sportsbooks.

Nick Saban's team has been a fixture in the National Championship game and atop betting boards for ages now. They've played in six of the eight CFP title games (winning three) since it switched from the BCS National Championship game in 2014. This program is as well-oiled a machine as you'll find, so oddsmakers aren't betting against Alabama, even after its loss last year to Georgia.

Bama's title chase started strong after handling Utah State by a 55-0 scoreline but hit some turbulence in a near-loss to Texas in Week 2. The Tide edged out the Longhorns after some late-game heroics from Heisman Trophy winner Bryce Young. They did, however, bounce back, with 63-7 and 55-3 wins over UL Monroe and Vanderbilt, albeit as massive favorites.

The Texas game in combination with Georgia's impressive start has Bama losing the edge on the odds board it possessed to start the season.

Since starting slow in what was ultimately a solid 11-point win over No. 5 Notre Dame, the Ohio State Buckeyes have been absolutely rolling.

The offense has gotten hot and stayed hot, throwing up 45 points against Arkansas State, 77 against Toledo, and — most impressively — 52 points against an always-stingy Wisconsin Badgers defense to move to 4-0. Next up: a home contest against Rutgers in Week 5.

Sportsbooks release college football futures odds pretty much as soon the clock hits zero in the previous season's national championship game. There are many ways to wager on NCAA football futures but picking the outright winner of the national championship is definitely the most popular. During the offseason and preseason, you'll be able to get a plus-money price on basically any team in the nation as there is so much uncertainty around what will happen next year.

NCAA football championship odds will usually look like this:

This means that on a $100 bet, you'll stand to win $125 if the Crimson Tide win the national title. If it's close to the end of the regular season and there is a particularly dominant program, you might see that a team is has a minus sign (-) ahead of its odds.

This means that if you bet on Georgia you would need to bet $145 to profit $100 if the Bulldogs won the championship.

Of course, futures odds are a fluid market. They can change every day based on news, injuries, suspensions, transfers, etc. In college football there generally isn't too much movement in the futures market during the offseason, but once the season begins, look for huge changes week-to-week based on wins and losses.

All the odds seen above are in American format. Should you find decimal format or fractional format easier to read, simply convert the odds using our simple odds converter tool.

Georgia was favored by 2.5 points over Alabama in the CFP National Championship game, which featured an Over/Under total of 53.

The college football national championship game will be played at SoFi Stadium in Inglewood, CA in 2023. 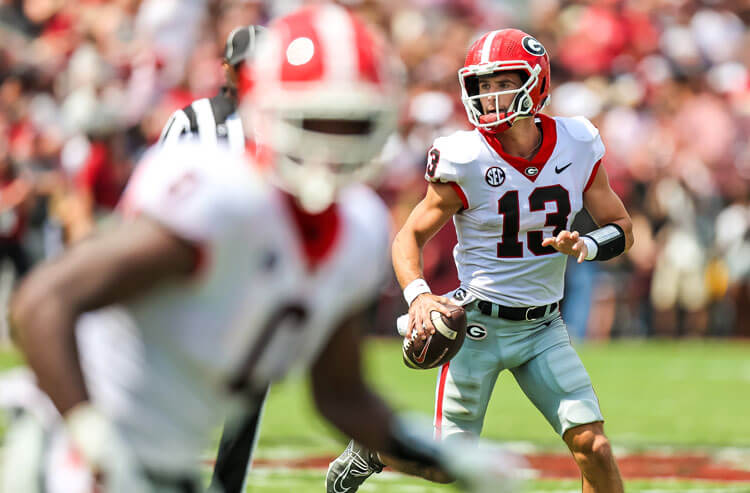