Arizona State vs USC Odds, Picks and Predictions: USC's Offense is Back in Business

Despite a win in Week 4, USC's otherwise dominant offense scored just 17 points, looking human for the first time this season. However, a date with the spiraling Arizona State Sun Devils should be just what the Trojans need to get back on track.

USC puts its undefeated record on the line as Arizona State comes to town for Week 5 of college football action.

It’s not expected to be much of a game, with Arizona State floundering and already firing its coach while USC is playing like a Top-10 team.

With the Pac-12 wide open for the taking, the Trojans will look to capitalize in the first year under their new head coach. Will Lincoln Riley’s perfect start in Southern California continue?

Check out our college football picks and predictions for Arizona State vs. USC to find out.

Let’s begin by getting the obvious out of the way: Arizona State is not a good football team.

The Sun Devils are 1-3 with their only win coming in the opener against an FCS school, Northern Arizona. They’ve been outgained by over 100 yards in every game since, losing by at least two scores each time. The Week 3 loss to Eastern Michigan was so bad that Herm Edwards was fired on the field afterward.

This staff was already thin after clearing house during the offseason as the program is under investigation for recruiting improprieties. With no clear in-house option ready to assume duties following Edwards’ departure, ASU has named running backs coach and longtime high school coach Shaun Aguano as the interim head coach. It could be a long season in Tempe.

Meanwhile, this USC offense — led by Oklahoma transfer Caleb Williams at quarterback and Pitt transfer Jordan Addison at receiver — is deadly. The Trojans are averaging 42.2 points per game and should find repeated success against a Sun Devils defense that ranks 107th in defensive success rate. Considering the Trojans rank seventh in standard down success rate while the Sun Devils rank 110th, moving the chains should not be an issue.

USC running back Travis Dye should lead a successful game on the ground against an ASU defense that has surrendered 510 yards and four touchdowns on the ground in its last two games. If Eastern Michigan running back Samson Evans can put up 258 yards and a score against this defense, I hesitate to think what a Trojans attack that ranks sixth in rushing play PPA (predicted points added) and ninth in rushing play success rate will do in this matchup.

Until the Sun Devils show any signs of life, I have to look the other way in their matchups. Look for USC to get back on track after a lackluster performance in Corvallis a week ago.

The Trojans did not play well in Week 4, edging out a 17-14 win against Oregon State despite largely being outplayed on the night. Four turnovers helped them seal the deal, which has been a theme for this team through four games. The Trojans have a massive +15 turnover differential on the season, snagging 11 interceptions and four fumble recoveries while not turning the ball over once on offense.

While that turnover luck might dry up eventually, it may not matter more down the road than it will in this matchup. The Sun Devils haven’t shown a pule on the road, going 0-4 ATS in their last four road games. They’ve also been a pushover in Pac-12 play, going 2-5 ATS in their last seven conference games.

Caleb Williams will look to get back on track after a down performance in which he completed just 16 of 36 passes for 180 yards and one touchdown. He should have every opportunity to do that against a Sun Devils team that ranks 125th in passing plays success rate on defense.

The Sun Devils will be without a number of key players defensively. Four defensive backs are out, as Aguano announced that the twin Markham brothers (Keon and Kejuan) at cornerback will be away from the team, while Ed Woods and Ro Torrence are both expected to be unavailable. There are concerns up front as well with defensive tackle Omarr Norman-Lott unavailable last week against Utah.

USC has a prolific offense, but last week’s dud against Oregon State did raise some questions. The Beavers dropped a lot of players back in coverage, blanketing Jordan Addison and forcing Caleb Williams to go elsewhere. Williams struggled with his accuracy and didn’t always take the short-yardage throws, looking for explosive plays that simply weren’t on the table.

The Beavers were able to bring a lot of pressure despite dropping so many players into coverage, raising concerns about the Trojans’ pass-blocking. There was a lot of praise heaped on the offensive line by the staff and media pundits, but I still have my concerns. What I saw last week was highly concerning and I had my doubts going into this season — none of which have been assuaged.

This offensive line ranks third in offensive line yards, so they’re good in run blocking and could maul an ASU defense that ranks 112th in line yards defensively. It’s in pass protection where the Trojans struggle, but it’s unsure if a lifeless ASU squad will make them pay.

I expect USC to find a lot of success on the ground, but that will also keep the clock churning. Neither team operates with much tempo, as the Trojans rank 84th in plays per game compared to the Sun Devils at 123rd. 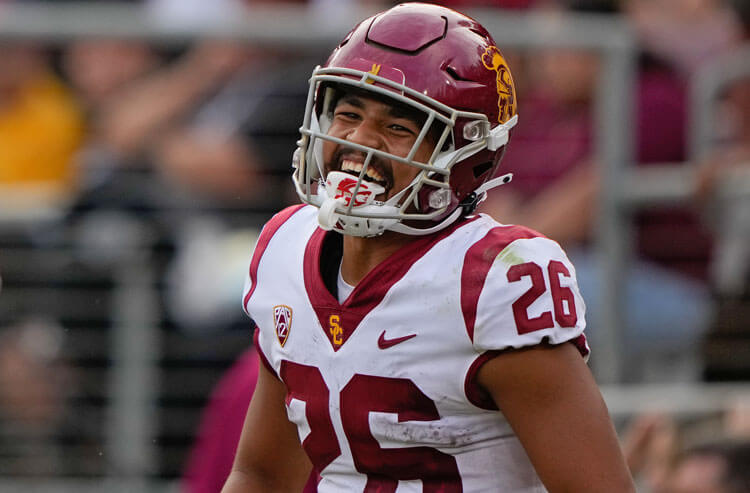 Arizona State vs USC Odds, Picks and Predictions: USC's Offense is Back in Business
Provided by