As the 2022-23 season picks up steam, see how the odds to win Most Valuable Player are evolving, with a very familiar fight for the trophy taking shape between Joel Embiid and Nikola Jokic.

NBA MVP odds are front and center with 2022-23 hitting its second half, and plenty of the usual suspects are dominating the midseason Most Valuable Player narrative.

With the board shuffling, many bettors will be looking to sink their teeth into the NBA odds markets. And, as it has each of the past two seasons, the 2023 trophy is looking like a battle between Nikola Jokic and Joel Embiid.

See how the contenders stack up in the latest odds for 2023 NBA MVP.

Voter fatigue? Never heard of it.

Two-time reigning MVP Nikola Jokic has been going absolutely bananas over the past two-plus months, comfortably averaging a triple-double over a prolonged stretch that's seen the Nuggets ascend to the West's No. 1 seed.

the year is 2050. flying cars exist. we can teleport now. in-person social interactions are a thing of the past. nikola jokic has just won MVP for the 30th consecutive year.

Three-peating as MVP is no small task. It's something only three players have ever done, none since Larry Bird in the mid-80s.

But with Jokic putting up another God-tier offensive season, and Denver now atop the uber-competitive West to boot, the narrative over the past few weeks has largely questioned if voters can plausibly deny him at this point.

His odds movement suggests as much — priced around +2,800 to +3,000 in December, he's now the odds-on leader, and appears poised to make history.

Looking bet on some NBA futures? Here are two of the best bonuses* available:

Joel Embiid knew that all eyes would be on him this past weekend when the 76ers took on the Nuggets, and he did more than just rise to the occasion, throttling the MVP leader for an emphatic 47/18/5 in a W that, at the time, put Philly within inches of the East's No. 1 seed.

The Process leaped from No. 4 to No. 2 on the odds board shortly after Saturday's afternoon dismantling of the favorite's squad, proving the impact of a high-profile matchup on the award's narrative.

Embiid was generally ridiculous in January, scoring a hair under 35 points per game, with the Sixers going 8-2 in his appearances to very much re-assert themselves among the East's top tier after an injury-riddled start.

The preseason betting favorite each of the past two years, Luka Doncic is still in search of what feels like an inevitable MVP award.

Doncic has been putting up undeniably monster numbers this season, with his recent string of 50-point outings (four since December 23) reverberating through the MVP narrative streets.

But, the question remains: Can Dallas succeed enough as a team to bolster his credentials? The Mavs are currently stuck in a huge glut of middling West teams, with just four games separating seeds No. 4 through 13.

Dallas could wind up pretty much anywhere in the West, putting Doncic's potential MVP claim in a blender.

Most sportsbooks will display odds in the American format as listed above. Nikola Jokic had all but locked up the award by the end of last season, so his odds were listed with a minus (-) sign ahead of the number.

Here are some trends you may want to consider before placing a bet on the NBA MVP:

Centers owned the NBA MVP award in the early days of the Association, winning the trophy in 21 of the first 25 years it was presented.

A quick look at recent NBA MVPs and the position they played. 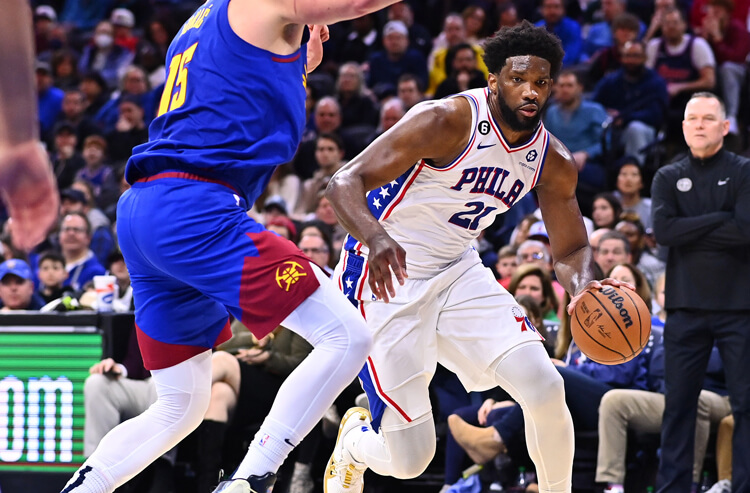