In this world, it seems, nothing is certain except death, taxes, and Giannis Antetokounmpo landing a spot on the All-NBA 1st Team.

NBA fans could be in for a case of deja vu.

Unibet has released odds for which players will be named to the 2023 All-NBA 1st Team, and the top of the board is dominated by a host of familiar names. Giannis Antetokounmpo (-1,430), Luka Doncic (-560), Nikola Jokic (-167), Jayson Tatum (+225), and Devin Booker (+230) were all selected to the All-NBA 1st Team at the conclusion of the regular season and are among the stars favored to be chosen again.

Unlike the NBA All-Star Game, where new players make their debut regularly, the league’s All-NBA 1st Team is a far more exclusive club where members tend to remain entrenched for years. LeBron James, for instance, was a 1st-Teamer 11 times from 2008 to 2018. Kevin Durant has also been a fixture over the years, cracking the squad six times since 2010.

Let’s take a look at the Top 3 favorites, as well as one worthy longshot and one player bettors should avoid at all costs.

Giannis Antetokounmpo’s production is so reliable you could practically set your watch to it. Over the past five years, the “Greek Freak” has averaged 28.4 points, 11.7 rebounds, 5.5 assists, and 1.3 blocks per game while earning five All-Star Game nods, four All-NBA selections, four All-Defensive First Team spots, two MVP trophies, and an NBA championship. Oh, and he’s still just 27. No wonder you won’t find much value in his prohibitively short odds.

2021-22 was a tale of two seasons for Luka Doncic, who entered his fourth year in Dallas overweight and out of shape. His poor conditioning led to a predictably sluggish start and was a contributing factor in an injury that knocked him out of action for 10 games from mid-to-late December.

Doncic worked closely with the Mavs’ training staff during his lay-off and, to his credit, returned far leaner and meaner than before. Being in better shape allowed him to consistently push the pace, and the formerly doughy Doncic averaged 30.2 points, 9.0 rebounds, and 8.2 assists per game after the All-Star break.

Luka Doncic has been putting up that pre-season work and appears to be in a very good shape before EuroBasket 2022 ????

The 23-year-old admits he learned an important — and humbling — lesson about caring for his body, and is reportedly in the best shape of his life this summer as he trains with the Slovenian national team.

Jokic cemented his legacy in 2021-22 by becoming just the 15th player — and second European — to win multiple NBA MVP awards. It was a simply extraordinary season for the Serbian center, who led the league in triple-doubles (19) and posted career-highs in points (27.9) and rebounds per game (13.8).

This dime to Monte Morris gave Nikola Jokic the triple-double ????

Jokic’s scoring may dip next season with the anticipated returns of Jamal Murray and Michael Porter Jr., but bettors should continue to expect his overall impact to be just as meaningful.

It’s mystifying seeing Ja Morant’s name buried so far down Unibet’s odds board. After all, the 22-year-old phenom emerged as the most electrifying point guard in the league last season when he averaged 27.4 points, 5.7 rebounds, and 6.7 assists per game to earn the NBA’s Most Improved Player award.

Should this poster by Ja Morant win the #ESPY for 'Best Play'?

As impressive as Morant’s stats may have been, they only tell part of the story. The Murray State alum is also a natural-born leader who has imbued the Memphis Grizzlies with his boundless energy and unwavering confidence. Morant’s ceaseless belief in himself and his teammates is a big reason why Memphis went from +15,000 championship afterthoughts in the preseason to the second seed in the Western Conference by year’s end.

Morant and the Grizzlies are poised to continue ascending, and bettors should jump on his plus odds while they still can.

When was the last time anyone felt good about banking on Kawhi Leonard? It certainly wasn’t last season, when he missed the entire campaign while rehabbing his right knee. And it definitely wasn’t in 2017-18, when he played just nine games and literally fled from the San Antonio Spurs.

Leonard is one of the league’s best two-way talents when he’s healthy, but his inability to stay on the court has become a major liability during his 10-year career. The two-time Finals MVP hasn’t appeared in more than 60 games in the last four seasons, and now, at 31, he’s even more likely to experience wear and tear on his famously fragile frame.

Even if Leonard remains healthy next season, he may not have as many opportunities to shine. The Clippers have added Norman Powell, Robert Covington, and John Wall to their core since “The Klaw” last suited up, and L.A. is apt to bring Leonard along slowly to ensure he remains available for a deep playoff run. Expect that cautious approach to cut into Leonard’s production, and to ultimately cost him a spot on the All-NBA 1st Team. 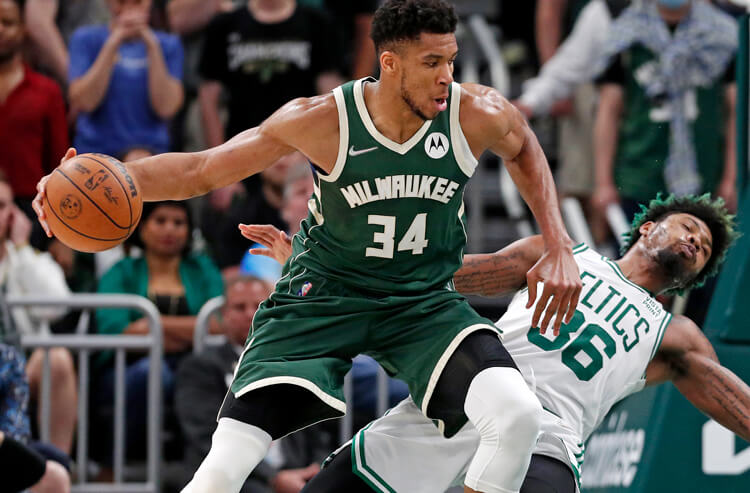 Cavaliers vs Raptors Picks and Predictions: Toronto and Cleveland Struggle to Pour in the Points
Andrew Caley | Nov 28, 2022

Hawks vs 76ers Picks and Predictions: No Embiid, No Problem for Philly's Defense
Ed Scimia | Nov 28, 2022