Toronto FC is mounting a spirited playoff push behind its Italian reinforcements. Can they upend Portland's league-long unbeaten streak? Our MLS betting picks think a certain newcomer will help them keep rising.

The MLS season is winding down, and a key fight for three valuable points will take place on Saturday when surging Toronto FC plays host to Western Conference side Portland Timbers. After a horrid start to the campaign, Toronto is riding high on the back of some key international signings, while the Timbers are clinging to the seventh and final spot in the playoffs out West.

Can Toronto put an end to the longest unbeaten run in the league, or will the Timbers continue to stay right in the thick of the hunt with a result? Find out in our Toronto FC vs Portland Timbers picks and predictions for Saturday, August 13.

With temperatures in the low 70s at kickoff, players couldn’t ask for better weather on Saturday evening. There is zero chance of rain, and winds will be light.

What seemed like a series of moves made from desperation have paid off handsomely for Toronto. Rooted near the bottom of the Eastern Conference for much of the opening half of the season, the summer transfer window brought the introduction of Italian wingers Lorenzo Insigne and Federico Bernardeschi. They, along with compatriot defender Domenico Criscito, have spurred a true Italian renaissance within the side, unbeaten in three straight since the two wingers came into the side, with eight goals scored in that time.

Before the All-Star break, Toronto were involved in perhaps the most exciting and entertaining match of the MLS season. A thrilling 4-3 victory over Nashville SC saw them win their first away match in more than a calendar year, as both Bernardeschi and Insigne found the back of the net,with the latter opening his account with Toronto. Now, they hope to have midfielder Mark-Anthony Kaye back from injury — although he is likely to start in reserve status — for the first time since early July to strengthen the side even further.

Speaking of unbeaten runs, nobody’s on a longer one in MLS play than the visitors. Portland have now gone 10 straight without tasting defeat, winning four in that span. Their last three outings have all been draws, with the last two both ending in a 1-1 scoreline. Goalkeeper Aljaz Ivacic has been a key to their successful run, and if not for a pair of massive saves early against Dallas last weekend, it’s likely they would have been out of that match before halftime.

Their last four away matches have seen them draw three times, with the lone win being a 3-0 victory against Seattle that saw them play the entire second half with a man advantage. Despite that, they still struggled to put Seattle away until a pair of goals in the final 10 minutes secured all three points. It was also their only clean sheet away from home in their last eight, conceding multiple goals in five of those outings.

Both teams need the three points in this one, as a draw won’t be a huge help for the playoff hopes of either side. Toronto has just 10 matches left to make up ground, and despite still sitting second-worst in the Eastern standings their recent form now has them just four points adrift of the Chicago Fire for the final playoff position. Portland will feel even more pressure, with just nine matches left and four teams within three points of overtaking them in the standings.

Home field for Toronto will be huge in this match. The last time TFC played in front of their home fans, it was Insigne and Bernardeschi’s debut, in which they blitzed Charlotte with two goals inside of 10 minutes and bagged four before the halftime intermission. While I don’t think they’ll be quite as dominant in this one, Portland’s leaky defense has allowed the 10th-most goals this season, and not even the solid play of Ivacic will be enough to keep them in this one.

Both of these sides have plenty of firepower in attack. Despite slow recent form, striker Jesus Jimenez is a threat in between Insigne and Bernardeschi. Meanwhile, Jaroslaw Niezgoda has scored six goals in Portland’s last 10 matches, while Sebastian Blanco and Santiago Moreno have each put five in the back of the net this season.

Both sides have also struggled defensively in the first half this season. Toronto have conceded 11 first-half goals in 12 home matches, while Portland have conceded the same ratio away from home before halftime. In Toronto’s last three matches, we’ve seen a total of seven goals scored, and seven have been scored in the opening 45 minutes of Portland’s last four matches–with only Ivacic’s heroics keeping that number from being higher. With how badly both sides will want this win, the first half over bet offers terrific value.

Insigne came into the Toronto side with the most hooplah, and understandably so. He’s been a focal point of the Italian national team and his contract was eye-popping. However, it’s his compatriot on the opposite wing who has stolen the headlines. He bagged the third in his debut, the 4-0 win over Charlotte, and he scored from the penalty spot last weekend against Nashville.

Portland have been undone over their past five matches from two places: corner kicks and attacks down their left-hand side. They’ve conceded a goal from a corner in each of their last three matches, and those have been set up in large part due to runs by their opponents’ right-sided attackers. They’ve also conceded two goals in their last three matches from that area, which is why I love Bernardeschi to have plenty of opportunities in this one to add to his tally. 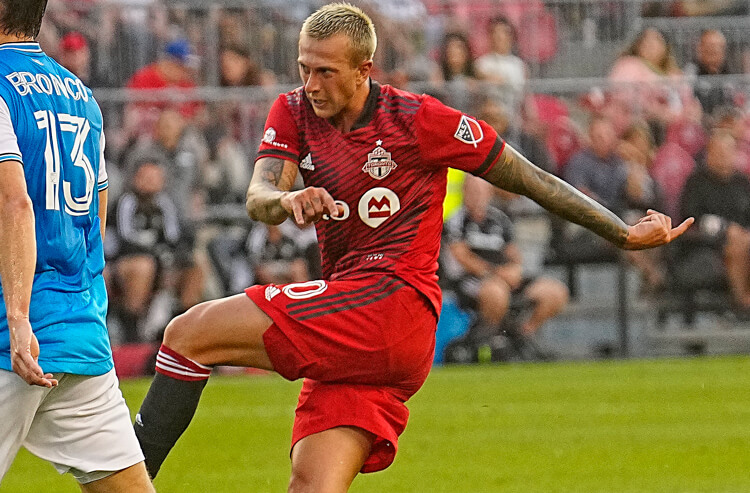