The Western Conference playoff race is tight, so the marquee matchup in MLS betting this week is in Tennessee, where Nashville SC host LAFC. Check out our picks and predictions for this match, with Gareth Bale's debut looming.

The marquee matchup of the weekend in MLS betting will take place in the Music City on Sunday night. Nashville SC will host an LAFC side that can reclaim the top spot in the West with a victory.

All eyes around the league will also be on the match for another reason — the likely debut of superstar winger Gareth Bale.

Will Nashville hold ground in a tight playoff race? Find out how the first-ever meeting between these two clubs will go down in our Nashville vs LAFC picks and predictions for Sunday, July 17.

Rain will be a threat throughout this match. Thunderstorms are expected Sunday afternoon heading into the evening, with temperatures rapidly dropping from the upper 80s down into the mid-70s. Winds are not expected to play much of a role, but lightning would cause play to be postponed, or the kickoff itself to be delayed.

Nashville is happy to be home, where it’s still trailing the rest of the league with just eight matches played. Starting the season on the road while the final touches were put on the stunning GEODIS Park, it has won just three of its eight matches in front of home fans, while a surprising 2-1 defeat to Sporting Kansas City last month ended a 25-match unbeaten home run, the sixth-longest such streak in MLS history.

Hany Mukhtar has stayed in form following his 2021 MLS MVP runner-up campaign, pacing the squad with 11 goals this season to go along with three assists. He’s found the back of the net in four of Nashville’s last six home matches, including each of the last two, and his strike just before halftime was the deciding moment in their 1-0 win over Seattle.

Mukhtar needs some help, as he’s tallied nearly half the team’s goals this season for a unit that ranks in the middle of the league in goals scored despite having the sixth-most shots on goal.

Scoring has not been an issue for LAFC, whose 104 shots on goal and 38 goals scored are both the second-best in MLS behind Austin. Their 5.47 shots on goal pace the league, and they’ve outperformed their expected goal tally by more than five goals thus far.

Carlos Vela and Cifu have been terrific at the top, with Cifu’s two goals and Vela’s two assists being key to their 3-2 El Trafico victory last Friday night.

LAFC conceded multiple goals in the second half for the first time all season against the Galaxy, but still managed to secure all three points. They did so without Giorgio Chiellini, whose debut could come from the start on Sunday night.

Gareth Bale is also expected to play about 20 minutes per media reports, although manager Steve Cherundolo would not confirm at Friday’s press conference.

LAFC have won five of their last seven matches, tasting defeat just once at Vancouver. However, they’ve played away from home just twice in their last six matches.

Meanwhile, Nashville has won just three of its last eight matches, drawing three others, and failed to beat either the lowly Earthquakes or Sporting KC at home.

While Nashville defends well, conceding a pair of goals at home recently to both Sporting and Portland cannot be overlooked.

For those reasons, I cannot back the favored Nashville side at home. LAFC should take a result from this fixture, the first-ever meeting between the two sides, but the juice is simply too high to play the double chance, and I see a draw just as likely as a road victory.

Instead, look to the Asian handicap to cancel half your stake for a draw and return half for a victory, or to fully cash should LAFC claim all three points.

In its eight matches at home this season, Nashville has conceded a total of eight goals while scoring just 11. Nashville’s taken immense pride in its home defense, and has kept a clean sheet in almost half of those fixtures.

Nashville kept Seattle off the scoresheet on Wednesday night, but sides that attack like LAFC — such as Atlanta — have found success against it.

That said, LAFC have shown some offensive struggles on the road of late, partly due to focusing a bit more on locking down the defensive end. They’ve scored just three total goals in their last four away fixtures, all three of which came after halftime (more on that later). Their last four away matches have seen two or fewer goals scored in total.

Nashville will likely bunker and look to hit on the counter through Mukhtar, and LAFC will be aware of this fact.

I don’t see them being too aggressive offensively, especially in the first half, leading to a likely cagey and low-scoring match. As such, I’ll happily take the Under at plus odds.

One key reason for Nashville’s inability to string together wins this season has been its poor second-half performances. Nashville’s been outscored after the break in half its games through 20, conceding 19 goals while scoring just 12 themselves.

At home, Nashville has conceded second-half goals in four of its last six matches, and has been outscored in two of the last five after the break.

That is a recipe for disaster against an LAFC side that is the best in MLS at making halftime adjustments and playing well down the stretch. As mentioned earlier, the Galaxy are the only side to score multiple goals after the break this season — and they were just the fifth and sixth goals conceded over the second half all season. They offset the two goals LAFC scored, giving them 26 goals after half through 19 matches.

When you take into consideration that Bale will likely see 15 to 20 minutes towards the end of the match — and maybe more if they are chasing a result — LAFC are in perfect position to continue paying out to those who back them coming out of the locker room for the second half.

When I can get them to pay back twice my stake against a team that struggles down the stretch, it’s a no-brainer for me. 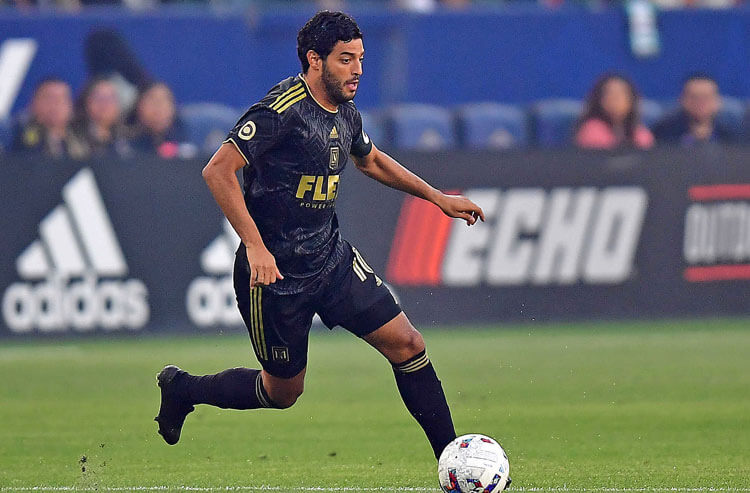