Following last night's surprising 1-0 shutout loss, our MLB betting picks are expecting the Yankees offense to get back in the saddle. They have a good bounceback history and we're banking on that to continue — with help from another Aaron Judge dinger.

Last night was one for ages when the two teams went 12 consecutive innings without a single run. After that, the Mariners finally broke the deadlock with a bases-loaded single and won 1-0.

These two teams have split the first two games of the series. The Yankees have a 10.5-game lead in the AL East while the Mariners maintain a slight hold on a Wild Card spot in the American League.

Read our MLB betting picks and predictions to find out who will win the series.

The Yankees opened up today as favorites at around -135. Since then, the Mariners have taken some money, and the Yankees have fallen to around -120. So the Mariners are returning at the price of about +110. The total opened up at 7.5 and has fallen to 7.

Use the live odds widget above to track any future line movements right up until first pitch and be sure to check out the full MLB odds before placing your bets.

Nestor Cortes (9-3, 2.57 ERA): You could make a strong argument that Cortes has been the true ace of the Yankee's pitching staff so far this season. He has one of the best xBA in the league as well as impressive hard-hit and barrel rates.

Despite bottom-of-the-league fastball speed, it's still the most effective pitch in his arsenal, with a run value of -11. His last outing was against the St. Louis Cardinals when he surrendered two earned runs in five innings. That followed up a July where Cortes posted a 2.53 ERA.

He's at his best when he's getting chases outside the zone and stacking up on his elite whiff rate for strikeouts. In his last outing, he posted seven innings of one-run ball against the Angels. That should not be a surprising result against a team that swings and strikes out a lot.

In the seven games following a shutout, the Yankees have scored in the first inning in four of them. Find more MLB betting trends for Yankees vs. Mariners

Yankees vs Mariners picks and predictions

We've backed the Yankees twice in this series and were probably a bit unlucky last night. However, we will be backing them for the series finale as I believe the pitching edge today is the strongest it's been throughout this series.

Let's talk about Robbie Ray first and why I think the Yankees should have some success against him. As we noted at the onset, his problems are centered around the barrel and hard-hit rates.

Ray is no stranger to giving up the long ball, which is why he finished fifth last season in home runs allowed even in a Cy Young winning season and is fourth in that same stat this season. He also ranks in the Bottom 25% in hard-hit rate.

It shouldn't come as a surprise, but that becomes an issue against a Yankees team that ranks second in barrel rate, third in hard-hit rate, second in exit velocity and of course, has the most home runs in baseball.

All of the things that Ray has issues with are where this Yankees lineup excels. To further this narrative, New York doesn't chase pitches outside the zone too often, but when they do, they have success. They rank sixth in baseball in chase contact.

Ray has given up five or more runs three times this season, and two of those have come against teams ranking in the Top 10 of chase contact. The other came against the Chicago White Sox, who rank in the Top 10 in both exit velocity and hard-hit rate.

On the other side, I expect Nestor Cortes to be his usual self. What's working the most in his favor is that he should have tons of success with his cutter, his premiere put-out pitch. Without a healthy Julio Rodriguez in the lineup, the Mariners only have three players hitting .250 at best against the cutter.

We're back to betting the New York Yankees today. The pitching matchup gives them a significant edge.

I like Nestor Cortes' matchup today against the Mariners, but I choose to focus on a different angle for this side.

The Yankees were shut-out for 13 innings last night. For someone that's watched the ebbs and flows of this New York season very closely, that's almost hard to process. So let's back the angle of them starting strong today post a shutdown.

Before last night, the Yankees had been shut out seven times this season, and here's what they've done in the next game:

We've already talked about why we like the matchup here quite a bit for the Yankees. Now, we have several trends that favor them scoring some runs today. Of course, we'll take a stab at them winning the first inning at the price of +330, but we're very comfortable attacking the team total here.

Our projections have the Yankees going over this total around 60% of the time, which gives us a significant edge on the price. In addition, if they do what they do post-shutout regularly, this will cash reasonably comfortably.

It's insanely hard to take a homerun bet below +300 for me, but it's much easier when it's Aaron Judge.

We've talked about Robbie Ray's homerun problem. Even when he's at his best, it's remained a consistent problem. The majority of his pitches are the fastball or slider and not only does Judge lead his team in run value for those two pitches, but he's also among the best in all of baseball for both.

He has the best hard-hit rate in baseball against the fastball at 70%. He likely won't get a fastball, but he's also no average hitter against the slider, with around a hard-hit rate of 55%. Either way you slice it, the matchup is favorable.

Aaron Judge Prop: To hit a homerun (+260 at DraftKings) 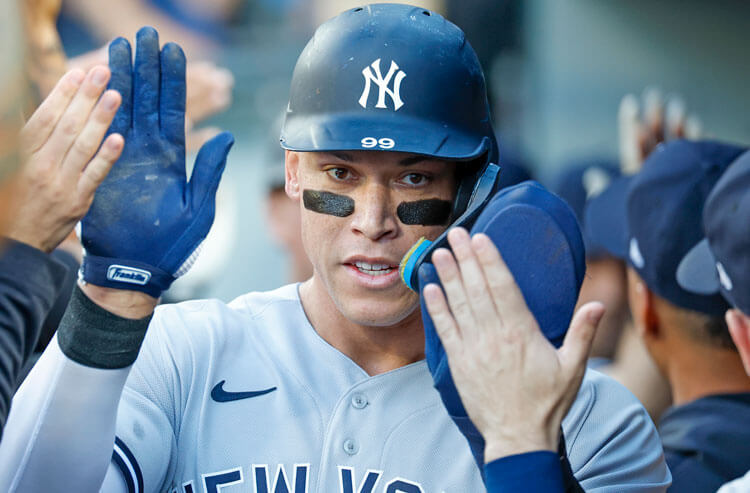 Phillies vs Astros Picks and Predictions: Keeping Runs Off the Board in Finale
Andrew Caley | Oct 5, 2022