World Series MVP betting odds will be available once the MLB Playoffs get underway this fall.

The World Series is baseball's biggest stage, where the best players shine. The means betting on which player will be crowned the World Series MVP when the dust settles.

Once the playoffs begin, sportsbooks will begin offering odds on players on playoff teams. In the meantime, check out our 2022 World Series odds and odds for the regular season AL and NL MVPs and Cy Young Award odds.

How is the World Series MVP decided?

The Willie Mays World Series Most Valuable Player Award is decided by a committee of media members and officials who are in attendance at the final game.

The World Series MVP can be given to a player from either the winning or losing team, although a player from the losing team winning the award has only happened once (Bobby Richardson, NYY, 1960).

The World Series MVP odds are displayed in a list format with corresponding odds for each player considered an MVP candidate. The odds will reflect the implied probability of that player winning MVP.

This means that a $100 bet on Altuve would profit $83 (or a $120 bet would win $100), while a $100 bet on Freeman would profit $187. Use our odds converter to switch American odds to decimal or fractional and to see how much you could win using different odds.

The World Series MVP Award has been handed out to the player deemed to have had the greatest impact on his team's performance during the championship series every year starting in 1955. Prior to the 2017 postseason, the award was renamed in honor of Willie Mays in remembrance of the Hall-of-Famer's historic catch in Game 1 of the 1954 World Series. The Willie Mays World Series Most Valuable Player Award trophy is a wooden pedestal topped by a bronze sculpture of Mays making the iconic catch.

Where can I bet on World Series MVP odds?

Once the fall classic begins, most online and casino sportsbooks will offer World Series MVP odds, as well as World Series moneylines, runlines, Over/Under totals, and other World Series prop odds. Head over to our best baseball betting sites for World Series odds in your area. 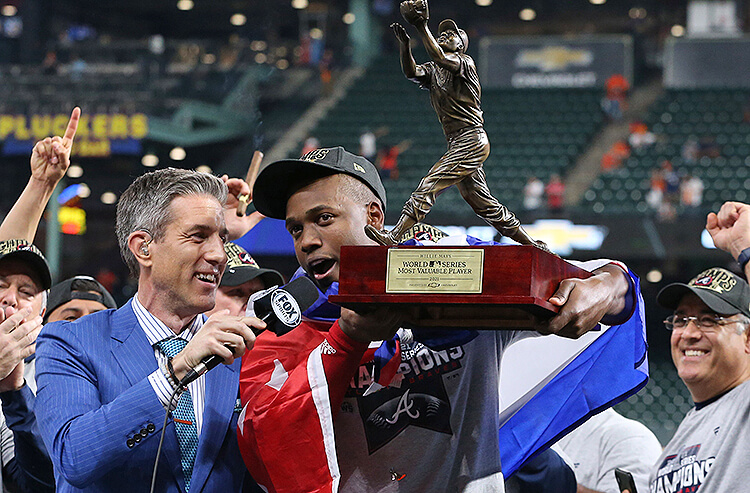 Dodgers vs Braves Picks and Predictions: Land of the Fried
Rohit Ponnaiya | Jun 25, 2022